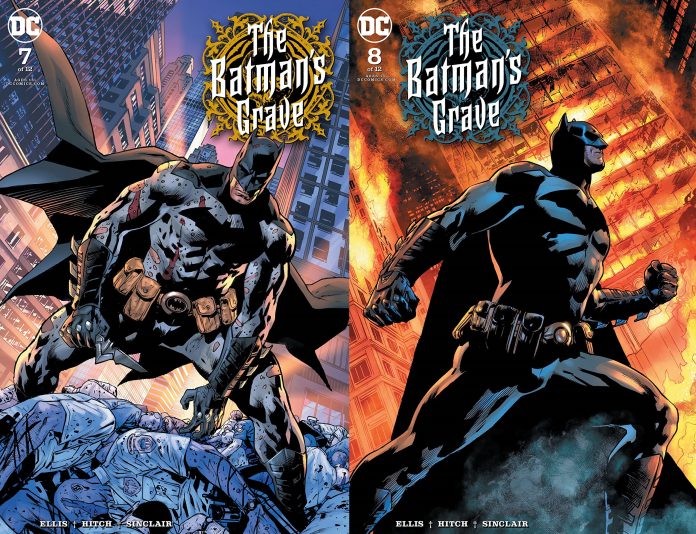 SYNOPSIS: There’s a lunatic on the loose and a dead body inside a supposedly impregnable home. Members of the justice system are being murdered, and nobody knows what’s happening. Does the Batman have the single clue that’s the key to the whole nightmare?

This was never about just a few strange murders. A war has been declared on the justice system of Gotham City. And the Batman finally has a clue as to who is running the war. He’s been fighting his own shadow the whole time.

After a planned hiatus that went on longer than expected thanks to current events, Batman has returned as the start of the second half of The Batman’s Grave is now on the shelves!

Picking up immediately where the last issue left off, Batman is departing the crime scene of the recently departed GCPD doc, Daniel Kaysen. The back and forth between Batman and Gordon continues to be strong.

However, their chat gets interrupted by the Batmobile suddenly exploding right in front of them! What follows is a humiliating, but humorous walk for the Dark Knight as he waits for Alfred to pick him up at a more secluded spot. It almost feels like a moment more appropriate for Spider-Man, but Alfred’s droll, “Please don’t forget to rate your driver on the app.” line as he picks up Batman saves it as the Caped Crusader curtly replies back with “Just drive.”

Back at the Batcave, Bruce and Alfred go over the clues. These discussions of theirs continue to be some of my favorite parts of the series, giving the proceedings a Holmes and Watson feel as they work things out, with the occasional ribbing from Alfred.

Hitch takes the time to reveal a new Batmobile, again looking like something that you might see on the big screen or an Arkham game. While that’s not surprising at all, the remote driving system allows Alfred to have some fun (even practicing his Robocop impression?) as Bruce gets some well-needed rest.

The fact that Batman actually went and took a break shows his humanity and vulnerability, something we’ll see again in the next issue. While I like seeing an invincible Batman who is two moves ahead, it’s also cool to see one who can be hurt, who gets tired and still comes back to overcome and save his city.

Issue #7 closes out with Batman doing his “Dark Knight Returns’ impression, but not before Hitch shows off another new Bat vehicle! It’s like a cross between The Bat and the Bat-Pod from THE DARK KNIGHT TRILOGY. DC Direct, if you’re listening, a Hitch figure, complete with this ride, would look excellent on my shelf!

Jumping in to issue #8, Batman is beginning his interrogation of Colonel Sulphur, the contracted killer behind the murder of Dr. Kaysen. Sulphur calls The Dark Knight’s bluff, or at least tries to, but Batman comes out on top, getting the information he needs by some form of trickery.

Ellis cuts away from the actual interrogation, letting the audience question what exactly Batman did for a moment. Hitch’s art doesn’t quite reveal what transpired, but he ever so subtly has Batman’s mouth turn up at the corner, indicating he got away with fooling his prey.

With the information from Colonel Sulphur, Batman heads to “Location 5” and has his first encounter with this series’ mastermind. With the meet scheduled to be ninety minutes after sunrise, The Dark Knight is robbed of one of the elements he relies upon on: darkness.

This puts Batman on a somewhat-even playing field with his new opponent-they can each assess the other with nothing to hide behind.  You’d better believe the Dark Knight Detective is soaking in every detail. Well, almost every detail…

The leader of the Scorn army has the area rigged for a getaway and sets it off after he and Batman verbally spar. It seemed odd to me that Batman wouldn’t notice he landed in a giant trap, but again, this Bruce isn’t perfect. He at least has the sense to launch a bomb releasing dozens of armor-piercing flechettes, one of which gives him a vital clue to the villain’s identity, thanks to it drawing blood.

Meanwhile, some of the GCPD, including Commission Gordon, have arrived at where Batman left Colonel Sulphur trussed up. One of the detectives tells Gordon that he should, I dunno, go outside and smoke his pipe. The Commissioner isn’t even out of ear shot the way Hitch depicts it, when the same officer suggests to her partner how things went down to make it a “clean shooting”.

It doesn’t shock me that a Gotham cop, a department known for being so corrupt it needed a Batman to clean the city up in the first place, would avenge a fallen member by fabricating a sequence of events to justify murder. What does bother me is that Gordon might be complicit with it.

Just two issues ago, we see Gordon express the possibility of shooting a mental patient in the head. Here he is either okay with his officers committing murder or is as simple-minded and naive as his portrayal in the ‘60s Batman tv show. I don’t see this as an aside Ellis will ditch either and I’m left curious how this will all pan out.

When it gets brought up at the next murder scene, it’s still left vague. Gordon clearly expresses that the death of Sulphur is no great loss, but it’s hard to get a read on what Batman thinks about the turn of events. Hitch shows Batman focused on the details of the latest crime, his eyes and feelings hidden by shadow. Does he suspect the truth? Are we leading to a Batman/Gordon confrontation or even worse, a betrayal?

Issue #8 also reveals the identity of the mastermind, one whose name is unfamiliar to me, but he has some interesting parallels with our hero. As it turns out, he’s a dark reflection of Bruce Wayne’s story, similar to an old (classic?) Batman villain, The Wrath.

The Wrath first appeared in Batman Special #1 (1984) and on the night Bruce’s parents were murdered, his parents were shot and killed in self-defense by a young Jim Gordon. He popped up again in Batman: Confidential and got a further revision in Detective Comics during The New 52 era. He even appeared in an episode of The Batman back in 2008! You know who also aided The Wrath in the cartoon and The New 52? A sidekick named Scorn. Things are starting to come into focus!

Ellis lets that revelation simmer for the immediate matter at hand-another murder, this time by Cornelius Stirk, at Arkham Asylum of all places. Its victim is shocking and forces Batman into a role I was surprised to see him be in for all sorts of reasons. I’ll let you discover it for yourself, but it certainly complicates things!

Ellis and Hitch continue to craft a tale that is stunning to look at, full of twists and turns, with an injection of wry humor (“Release the Bat-Hounds”, anyone?) to boot. Morality can be murky and motives get questioned, causing the reader to examine everyone’s motivations. Where this goes next is anyone’s guess! – Javier E. Trujillo

GRADE: A (for both issues)