SYNOPSIS: As writer Simon Spurrier jumps on board for the start of the three-part tale “The Rule of War,” it’s close encounters…of a Justice League kind! After answering a distress signal from distant space, Batman, Superman, Wonder Woman, the Flash, and Green Lantern discover an abandoned cargo ship full of young aliens! When the League attempts to return the children to their home planet, they are met with awe, terror, and war! Thus begins a three-part storyline that will take the League to a previously unknown planet, with an all-new species, a dangerous mystery, and a new, otherworldly villain. 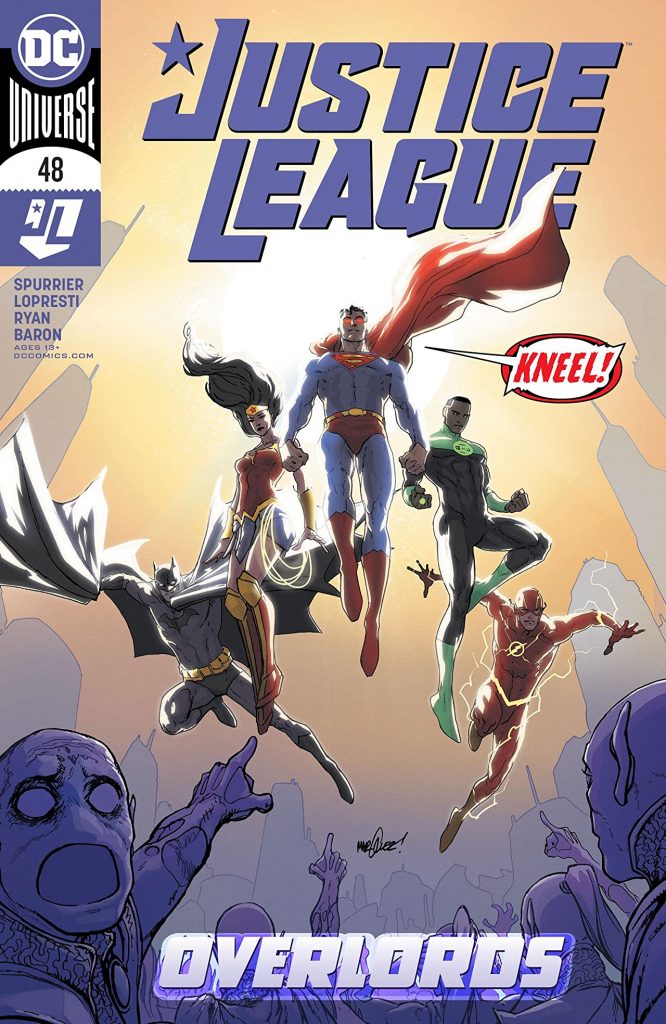 What do you get when you cross DC’s iconic super-team with Star Trek? The answer seems to be the three-part storyline kicking off in the latest issue of Justice League. Simon Spurrier jumps aboard the writer’s chair for the next JL adventure and he is bringing a somewhat “alien” feel to the team-up book.

DC comics have long been known more for their mythical approach to storytelling. While Marvel books have leaned to the front of science fiction, DC has generally had its pantheon of gods lead the way. Even in their grand outer space adventures, Superman and friends feel a bit more Star Wars than anything from Gene Roddenberry’s approach to the cosmos. Perhaps that is what makes Justice League #48 feel like such a refreshing addition to the titles run. There is a foreign feeling to this book that is a welcome change of pace, and one that feels very “of the moment” given the current political climate.

The issue opens with the league responding to a ship’s distress signal from a faraway sector. An enormous creature appears to be attacking a vessel full of alien children, with the ship quickly about to lose structural integrity and leave all its passengers to die in the icy vacuum of space. While the boys plan out how to save the day through brute force, Wonder Woman is able to think quickly and find a non-violent solution in order to avoid tragedy. From there, the team sets out to return the alien children to their homeworld, Trotha, which they are told is under the violent control of an oppressive dictator.

The character work and team dynamics in the introductory scene sets the stage nicely for some of the interpersonal interactions at play for the rest of the issue. Spurrier’s work with Wonder Woman in particular is strong. Her ability to use her brain when the rest of the team is ready to resort to brawn effectively reminds us that she is more than just a warrior, she is motivated by compassion as well.

A good portion of the issue is dedicated to establishing the backstory of the newly introduced world of Trotha and its very divided population which align themselves into two opposing groups. It’s in this framework that the allegorical nature of the story is most apparent. The Trotha are kept divided by a supreme leader, one that uses fear and divisive communication tactics to remain in power and keep her people divided. It may be a bit on the nose, but the storytelling is effective and the narrative set up remains entertaining. Readers may smirk to themselves a bit with the obvious parallels to American politics but the feel is newer than it has the right to be given how infrequently DC ventures into this sort of science fiction.

Aaron Lopresti’s work on the issue is strong and commanding in an approachable manner. Character designs feel fresh but familiar, with a slight lean to the cartoonish side of the spectrum at times. There is almost a feeling of 80’s “Super Powers” design elements with bright colors throughout the book provided by David Baron. The pencils have a softened roundness to them without losing any form or structure, which helps balance a bit of unfamiliar storytelling.

Overall, this is a fun and intriguing entry into the Justice League title. It’s a story that seems to be telling more than it is on the surface, even if the comparisons it’s drawing stay at out of the deep end of complexity. It’s fun to see the league confront issues of societal conflict, morality, and interventionism in a narrative that could easily swap its characters with Captain Kirk and company. – Garret Grev