SYNOPSIS: Just when you thought it was safe to crack a smile, The Joker is back to crash the party! Hot on the heels of “Joker War,” the Clown Prince of Crime is revealed as the mastermind behind Two-Face’s turmoil-but to what end? Batman will need all the allies he can get, and what better ally than Harvey Dent? Can the Dark Knight cure his friend once and for all in time to fight the greatest battle of his life? 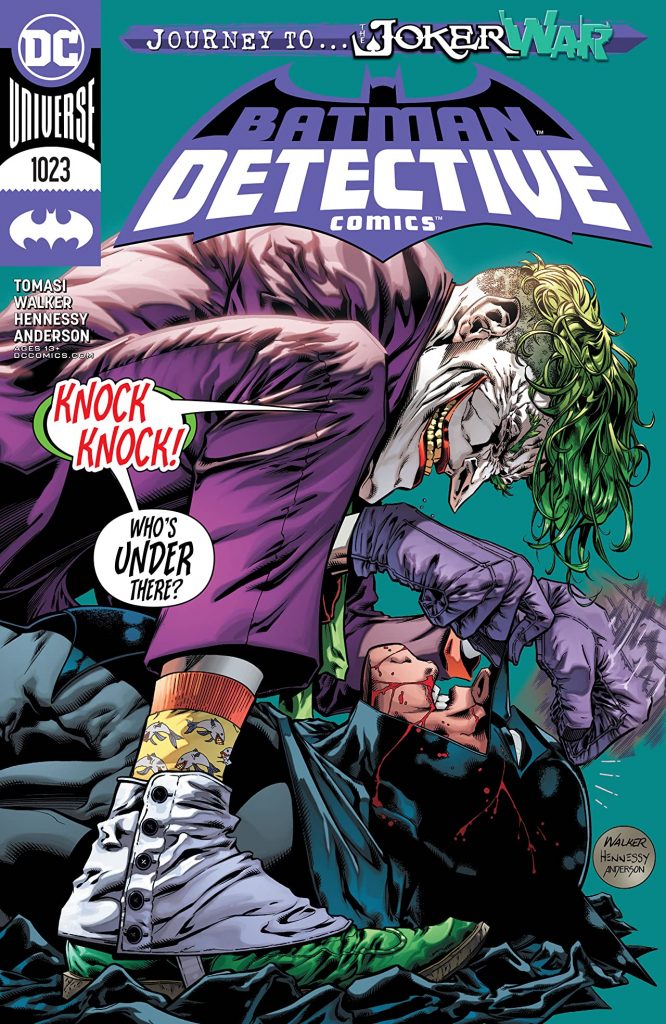 We have long been waiting for this moment.  The Bat-event of the summer, Batman comics’ “Joker War” crossover event.   Batman and his arch-nemesis The Joker, battling it out for the soul of Gotham City once again.   Tomasi gets his hands on The Joker for the first time since Detective Comics #1008 and just like that issue, he brings with him an all-star artist along for the ride, this time in Brad Walker.

Last July Tomasi wrote a Joker story for the ages.  A one-shot tale that pitted good vs evil in a way that could only be written by a writer of Tomasi’s caliber.   You can see glimpses of that in this issue, but Detective #1023 isn’t a one-shot, not by a long shot.  You can feel it with every page turn, this is the start of something.

Tomasi has really reached down and channeled his inner psycho the past couple issues starting with Two-Face and now picking up right where he left off with The Joker.  Listening to The Joker’s monologue as he dances around the Court of Owl catacombs is both terrifying and at times funny. One would say almost definitive for the Clown Prince of Crime.

However, where Tomasi excels in every issue is his Batman.   A Batman on the prowl, a Batman who knows what he is looking for, a Batman who knows who to get the answers from.  Detective work and beatdowns, that is what we want in our Batman and that is what we get.  Tomasi takes the reader for a night on the town in Gotham with some of its most dangerous citizens and it is nothing short of entertaining.

I’ve said it before and I’ll say it again, I know I am in for a hell of a read when I see Brad Walker is the artist on any comic book, much less Detective.  Well, where do we begin with this one? How about the cover!  If the main cover to ‘Tec #1023 does not get you pumped up as a Batfan I honestly don’t know what will.   The Joker pinning Batman, ready to take a peek under the cowl, instantly ramping up the excitement for this issue! The look of Walker’s Joker is a thing to behold.  Just the way his lanky body jumps from coffin to coffin in that perfectly fitted suit from the flower in the lapel down to the spats on his shoes, this is The Joker we all have in our head.  Walker is just taking that idea and putting it on paper. Move over Greg Capullo The Joker has a new barber in town and that undercut is looking fresh!

I’ve mentioned how Walker is really great with showing expression with eyes in my previous reviews and this issue is no different.  At times this could go down as one of the most frightening looking Jokers in recent memory.   Those eyes and eyebrows matched up perfectly with the curling grin will send shivers down the reader’s spine.  You can hear Joker’s maniacal laugh like you were in the room with him. Walker’s artwork is that powerful, he is doing more than just drawing a character he is drawing and channeling emotion.

Walker has some wonderful splash pages and panels of Batman taking down thugs as he goes about his mission.  Soaring through the air, jabs to the jaw, and Batman crashing through windows is everything you could have asked for in this book.  The last few pages of the book are an all-out battle royal that you won’t see coming.  A truly fantastic action-packed ending that leaves you clinging for more.

Detective Comics #1023 is the start of something bigger than just one issue.   What Tomasi and Walker are crafting has the hints of something greater.  This issue does an excellent job of setting up the dominos while having fun around Gotham simultaneously.  We have no clue what Tomasi and The Joker have up their sleeve and this is just the way it should be.

In the words of The Joker from BATMAN ’89 “It’s going to be a hot time in the cold town tonight!” – Peter Verra

OPINION: Affleck Directing A Batman Movie Was Doomed From The Start