SYNOPSIS: The Designer’s machinations have left Batman’s life in tatters! Gotham City’s ambitious rebuilding has skittered to a halt as new powers are rising to shape its destiny-and Batman is powerless to stop them! With no Alfred or Bat-Family to lean on, the Dark Knight stands alone against the ascendance of his greatest adversary!

“I will become a better BAT.” 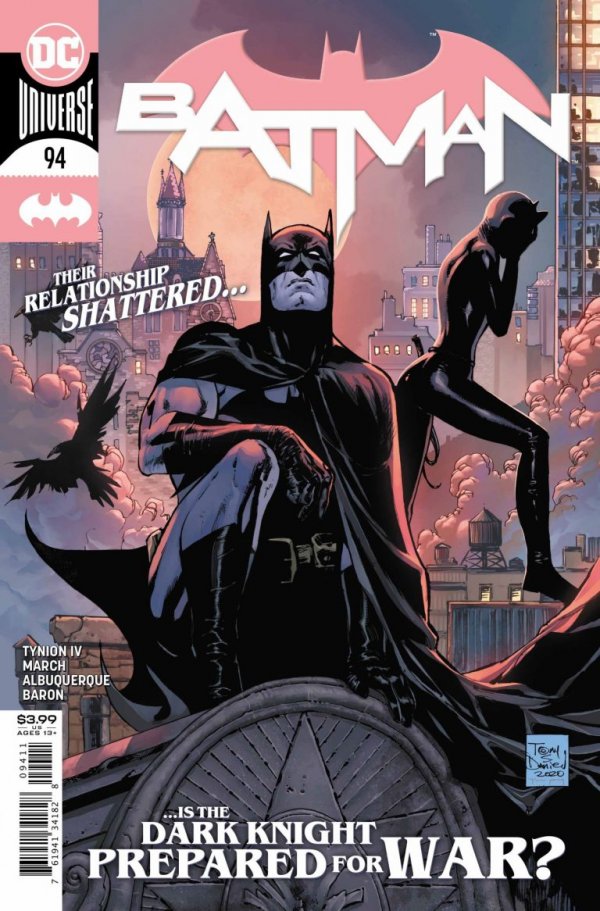 And the continuing storyline of writer James Tynion IV’s BATMAN is instantly better title due to issue #94’s total awesomeness!

I’ve been reading Tynion’s run from the get-go, and BATMAN #93 — which was billed as the “epic climax” of the “Their Dark Designs” storyline — was the first story/issue/comic I really didn’t like.  BUT…

He MORE than makes up for it with what is actually “Their Dark Designs Finale” with issue #94 and it’s one of the most badass Batman stories I’ve read in quite a while.

Yes, Batman — well, Bruce Wayne, actually — has finally got his shit together!

While this issue walks the line of being a retrospective of “Their Dark Designs” and setting up “Joker War,” overall, it comes off — and feels — very much like a singular Batman tale.  We get some resolution to Bat/Cat, the fate of Selina Kyle, and where most of Batman’s rogues are located — and maybe where they stand — as The Joker is fixin’ to wage war on ALL of Gotham.

If you were bummed out and felt a bit underwhelmed — like me — with the so-called conclusion of “Their Dark Designs” in #93, don’t jump off the boat now as “Joker War” commences.  Stick with BATMAN and Tynion and company for a bit longer.

If BATMAN #94 disappoints you, I promise that your subscription to BOF is on me for the remainder of your life.

“I will become a better JETT.”