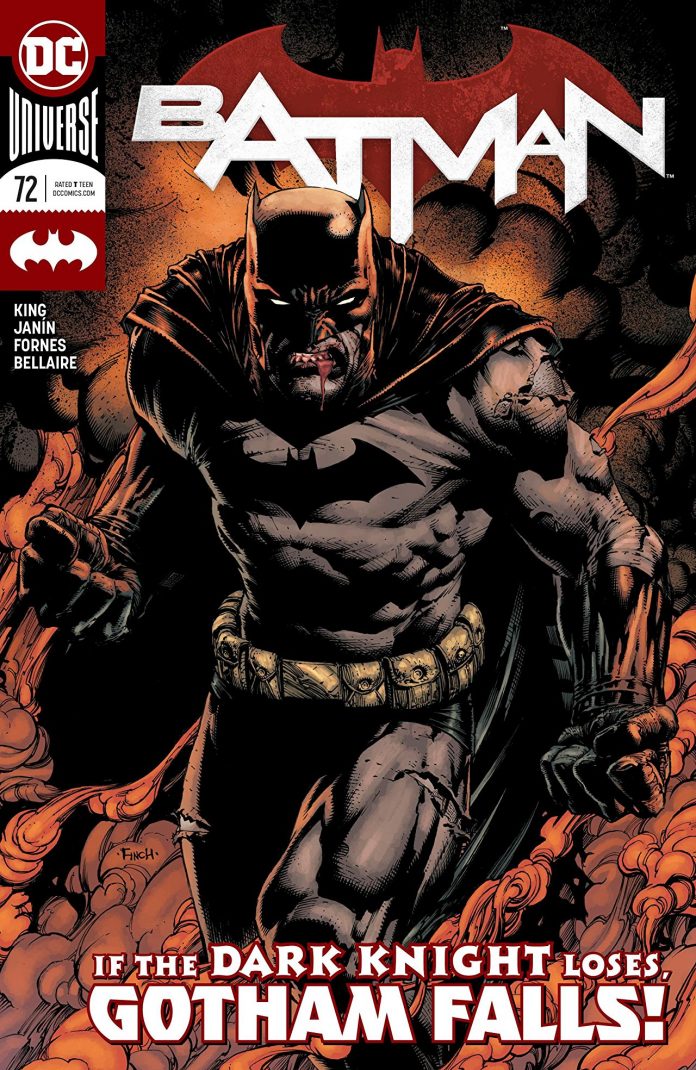 SYNOPSIS: “The Fall and the Fallen” part three! Is this the end of Gotham City? Bane’s army of villains is taking over the city, and Batman’s back is against the wall. With all the things Bane has done to him over the last year—from breaking up his wedding to trying to assassinate Nightwing, and then invading Batman’s mind to expose his most terrible fears—could this be the worst hate the Caped Crusader has ever encountered?

Thunder and lightning ravage the skies above the amber glow escaping the windows of Wayne Manor. Inside, Batman and Bane battle it out as they’ve done so many times before in a stormy melee more savage than the might of Mother Nature that rages outside.

“I see you,” says our narrator, listing the names of those who have conspired against Bruce Wayne with Bane. “I see all of you. How you made this. From the beginning.”

And for the first several sentences, you’ll think you know who’s talking. You’ll be right, but you’ll be wrong. (Just think about it, and you’ll figure it out. And don’t feel bad if you don’t get it right away. I didn’t.) The brawlers engage page after page, with Jorge Fornés making Batman look as exhausted and outclassed as Bane looks villainous and virile (and also a little like Vin Diesel). The fight pages alternate with Mikel Janín’s handsome renditions of big moments from throughout writer Tom King’s run, as letterer Clayton Cowles undoubtedly finds himself tussling with carpal tunnel at every turn.

Because through it all, our narrator lays out his case for Bane’s supremacy over Bruce Wayne and Gotham City. He connects every dot, explains every motivation, and weaves together nearly every single story thread from the first panel of King’s run back in BATMAN #1 to the final question mark here.

As airtight as the evidence might be, the narrator’s hypothesis would require Bane to have a supernatural ability to predict and control characters and events on a global scale. If what’s being supposed here is actually meant to be presented as fact, it’s ludicrous to the point of making King’s entire run feel retroactively ridiculous.

A case could also be made that the narrator is telling Bane exactly what he wants to hear, feeding the Devil of Santa Prisca’s infinite ego to achieve what I predict to be a similar goal but for different reasons along another path.

What I do know is that King is sticking to his guns to tell this story on his own terms. I understand why some readers felt the “Knightmares” went on for too many issues, especially with a two-issue Flash crossover in the middle that delayed the resolution even more. I loved the “Knightmares” issues because they were weird (and original!) stories that showcased incredible artists unleashing their talents on King’s innovative imagination.

But King is taking a gamble here by getting weird again for the second issue in a row, especially since it still isn’t entirely clear what the timeline is for issue #71 and this one. I believe in King, and I trust him, but #72 strides right up to the edge of further alienating readers eager for clarity and forward movement.

Regardless of how you feel about the writing, you can’t deny that it looks good. Fornés is a master of physicality who capably delivers realism and grit; I love how Bane smiles at what passes for Batman’s best these days. It’s as if David Finch’s muscular cover is how Batman thinks he appears to Bane, while Fornés is showing us how it really is. (Nice touch by going with Finch for the cover, by the way, as he was there at the beginning that this issue circles back to.)

Janín, meanwhile, takes a stunning trip through his greatest hits, recreating pivotal moments that powerfully recall this volume’s biggest memories and emotions. Colorist Jordie Bellaire is the secret sauce that pulls it all together, blasting blood-red lettering against the subdued blue hues of the Batman/Bane fight while allowing her palette to explode unfettered across Janín’s incredible compositions.

And where can I get a poster of Michael Golden’s alternate cover?

What’s happening? Where are we? Where is this going?

BATMAN #72 settles no scores, answers no questions, creates new quandaries, and makes sure the stakes remain in orbit. In the hands of a lesser writer, this issue’s further detours into mystery would be on the verge of losing me. But I’m still having fun, and I hope you are, too. – John Bierly