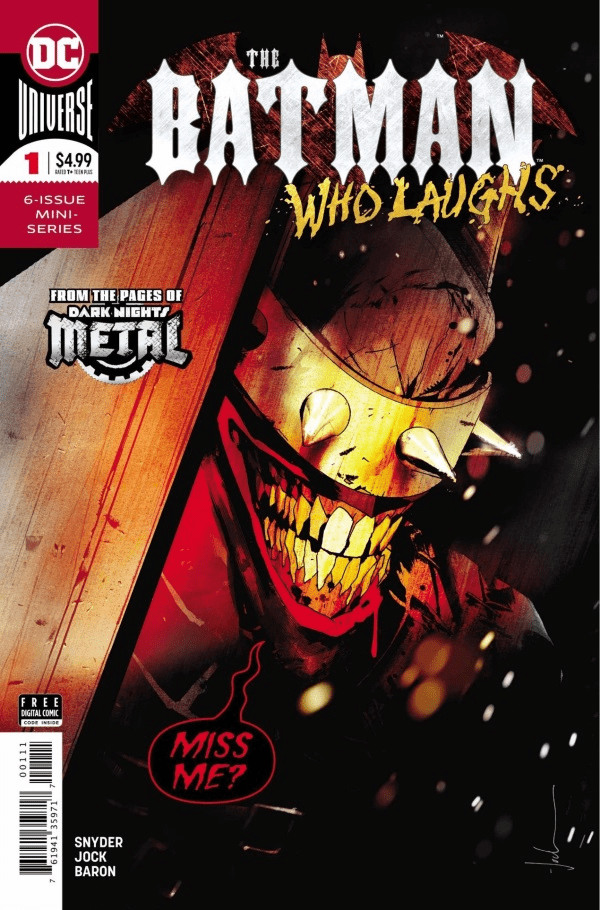 The Batman Who Laughs is one F’ed up character.  I figured he’d return to the pages of Batman/DC comics at some point as the character was one of the best things to come out of METAL (love Snyder, but I wasn’t a big fan of METAL).

The arrival of The Batman Who Laughs also bring us the “trick,” if you will, that created that evil version of Batman: Whoever kills The Joker becomes The Joker.

I’m going to admit here that while I was engaged and entertained by issue #1, it made me confused as hell.  Check this out…

The story opens with Batman chasing down some Gotham bad guys — just like any typical day in the city.  Once he defeats and secures these dudes, he proceeds to investigate the cargo they were trying to steal.

What was said cargo?  Well, that would be the dead body of Bruce Wayne — a dead Bruce Wayne who is seemingly about 10 to 15 years older than the “real” one.

I know there’s a DC Multiverse, but WTF?!  ANYWAY…

Stuff then gets really serious in this story once we’re taken to Arkham Asylum where we meet another (and I’m guessing never before seen) evil Batman known as The Grim Knight.

Wanna guess who brought him there?

If you said The Batman Who Laughs, you’d be correct.

I’m not going to spoil anything else from this point on, but I will say that same damn crazy stuff goes down and the target of The Batman Who Laughs is revealed…and it ain’t our Batman…maybe.

The story moves from Arkham to the Batcave and we are then left with one hell of a cliffhanger involving Batman and The Joker…and I’ll leave it at that.

As I said, THE BATMAN WHO LAUGHS #1 has me confused as hell but very much intrigued.

Is the main Batman of this story really “our Batman?”  If not, where is he?  If it is, how in the f*&% does he get out of the mess this issue leaves him in?  And what’s up with the 40+ year-old dead Bruce Wayne?!