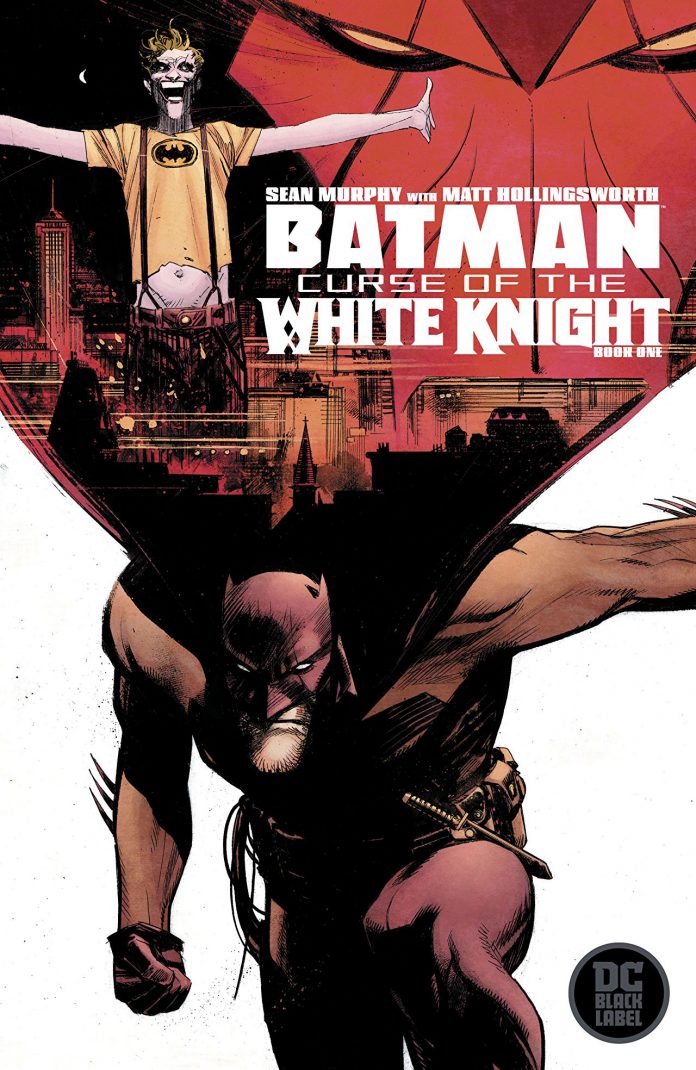 SYNOPSIS: In this explosive sequel to the critically acclaimed blockbuster BATMAN: WHITE KNIGHT from writer/artist Sean Murphy, The Joker recruits Azrael to help him expose a shocking secret from the Wayne family’s legacy—and to run Gotham City into the ground! As Batman rushes to protect the city and his loved ones from danger, the mystery of his ancestry unravels, dealing a devastating blow to the Dark Knight. Exciting new villains and unexpected allies will clash in this unforgettable chapter of the White Knight saga—and the truth about the blood they shed will shake Gotham to its core!

Sean Murphy’s Batman: White Knight was the talk of DC when it was first released back in 2017. The 8-issue series became an instant classic, and fans were immediately pleading for a sequel when it wrapped up.

Ask, and you shall receive.

The writer/artist is back with the first chapter of his 8-issue follow-up, Curse of the White Knight. If you (for some reason) had any concerns of a sophomore slump, fear not. It’s off to a fantastic start.

I don’t want to do a panel-by-panel breakdown (though that’d be fun), but I’ll give you a quick summary. The Joker has escaped from Arkham Asylum. While that isn’t anything new to us Bat-Fans, what is disconcerting is the fact that he’s found a centuries-old artifact that contains a shocking revelation of the Wayne family.

Meanwhile, Bruce is having a revelation of his own: he has failed and is questioning his secret identity. Gordon knows he wears the cowl, now should the rest of Gotham?

Finally, a military veteran receives life-shattering news and seems to fit in perfectly with The Clown Prince’s plans. That veteran’s name? Jean-Paul Valley.

During the course of White Knight, I constantly complimented Murphy’s pacing. It lacked the inner monologue and had excellent dialogue that kept the story exciting and dramatic, while also effortlessly moving us along. He doesn’t slow down here. He smoothly brings us right to where we left off in the last series, bringing authentic exchanges between most of our characters. He also opens the book with what seems like an “out there” scene, but we quickly realize how important it is to set the stage for the rest of the issue. Also, we get answers to that note Alfred left for Bruce, we have an update on the GTO, and Murphy gives us more Easter eggs (in the Batcave of course!).

Though it’s only the first issue, my biggest relief here is of Jean-Paul Valley. I’ve never cared for the character and admittedly wasn’t excited when Murphy mentioned he’d be using him for this series. BUT….he works here. We quickly empathize with this version, and he’s going to be a key figure moving forward.

Batman: Curse of the White Knight #1 is off to a thrilling start. A mystery, some action, some drama and a bit of a cliffhanger help take us right back to the last series that we all loved so much.

The table is set, and Sean Murphy is ready to fill our plates with the next Batman feast. So put on your sweatpants and make some room. – Ryan Lower