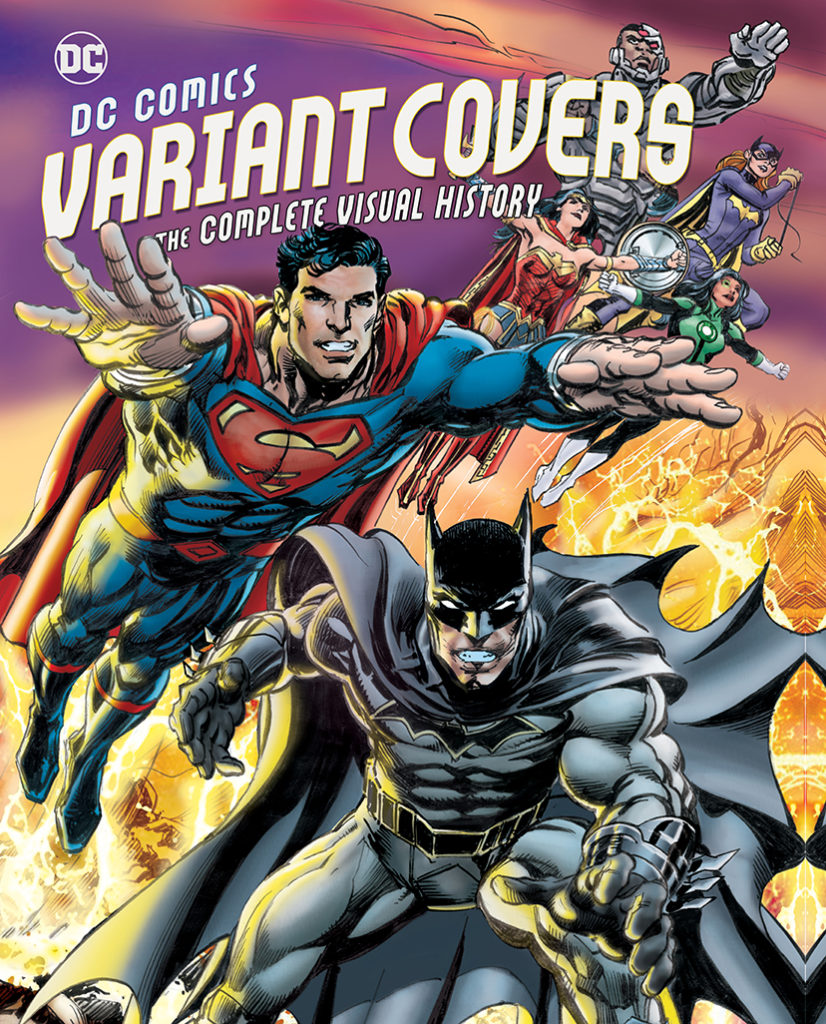 SYNOPSIS: For the first time ever, explore the complete visual history of DC Comics variant comic book covers in this amazing collection.

DC Comics cover art is some of the most celebrated in the world, from the first appearance of Superman in Action Comics #1 to the iconic covers that adorn classics such as Batman: The Killing Joke and Watchmen.

Fans of comic book cover art have also come to relish a phenomenon that began in 1986 with the first issue of The Man of Steel, which featured two different covers from artist John Byrne. The notion of so-called “variant covers” caught on and has now become a regular part of DC Comics’ diverse output, with a wildly creative set of alternate covers being created for many key issues. Now you can explore the world of these alternative works of art with DC Comics Variant Covers: The Complete Visual History, which showcases some of the finest and most famous variant covers ever produced, with insight into the design process from leading comic artists and industry experts. Featuring an astounding collection of covers featuring DC Comics’ remarkable characters, including Batman, Superman, Wonder Woman, Green Lantern, Aquaman, Cyborg, The Flash, and more, DC Comics Variant Covers: The Complete Visual History is the perfect gift for casual fans and comic book aficionados alike.

(EDITOR’S NOTE: BOF received this book from the publisher for reviewing purposes.)

I’ve been reading DC Comics (the Batman titles in particular) for nearly 50 years.  And while I knew that “variant covers” — alternate comic book covers — were a relatively new thing.  However, I did not know that DC Comics invented the idea and the first variant cover was for THE MAN OF STEEL #1 back in 1986.

Personally, I do not own many variant covers — that was on purpose because I didn’t want to spend the extra money securing two versions of the same issue.  However, I now own a good chunk of them — and you can too — thanks to DC COMICS VARIANT COVERS: THE COMPLETE HISTORY from Insight Editions.

I took my time going through each page of the book looking at all the beautiful artwork and reading the details provided by author Daniel Wallace.  Really, if I had another one of these books, I might cut out some of the pages, frame them, and hang them in my office!  Wallace was tasked with picking out “the best” of DC variants, which must have been hard to do.  Most of the images included are large and are sometimes double-page spreads.

Of course, the Batman stuff was what I searched for upon first opening the book and there’s some awesome Bat-stuff to see by the likes of friend of BOF Lee Bermejo, Frank Miller, the late Darwin Cooke, and many others.

Staying true to the book’s title and premise, it includes a variant by Neal Adams, while Frank Cho provides the actual cover on the front hardback cover.  (Apparently, there are two different versions of the book’s hardback cover, with one by Adams and the other by Cho.  The book I received featured the black-and-white Cho cover on the front cover, while Adams’ was found on its jacket.)

Heck, maybe I will get another via Amazon, cut out and frame some of those pics like I said I was temped to do! – Bill “Jett” Ramey