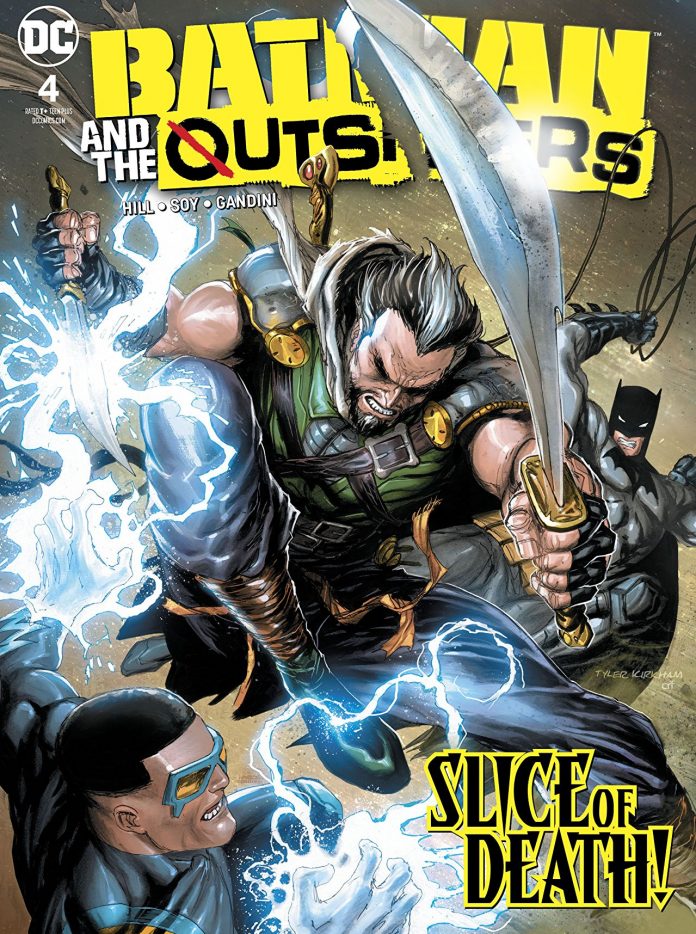 SYNOPSIS: At last—the Outsiders take off on their mission to rescue Sofia from none other than Ra’s al Ghul! But Ra’s has other ideas for the quartet, and with the aid of Lex Luthor’s mysterious gift, they are playing right into his hand.

The Outsiders have failed to rescue Sofia, and now she is in the hands of Ra’s Al Ghul. Still working through their growing pains, the team must try again to save her, but is she still willing to be saved?

Ra’s Al Ghul has been around Batman for years, but this story, and particularly this issue has shown him in a new light (at least to me).  Ra’s has always felt like a self-righteous megalomaniac with a ninja army, but what is the League of Assassins if not a cult?

The story beings with Ra’s preys on Sofia’s confusion and insecurities; all to get her to trust in him. He figuratively tears her down, by taking away her name, altering her appearance, and letting the league physically abuse her, all while telling her that only by following his directions does, she have a chance of stopping the abuse and taking her rightful place. He then gives her a new identity and purpose. That is standard cult leader fare. He is powerful and dangerous, but Ra’s is ultimately a con man who believes the lies he’s selling. It is a view of Ra’s I never thought of, but I hope the story continues to flesh out.

Every issue Black Lightning has questioned why Batman picked him to lead this team, never satisfied with the answer presented. Batman has said it is because BL is a teacher and that is what this team needs, but the story is slowing showing a better answer. Black Lightning is Batman. He is not broken or steeped in the use of fear as a tactic, but he is paranoid and untrusting, the two most Batman traits around. BL outright tells Kaliber he does not trust him and doesn’t see why Batman does. He has yet to trust Batman anytime they have had a conversation, even going so far as to call Batman “extra” (Bruce did show up on a yacht full of people he didn’t know to have a business meeting, that was a fair point). Batman could only trust a someone that would be skeptical of his every move, it’s his way of keeping himself honest. It’s the ultimate sign of respect for Black Lightning, whether he knows it or not.

The rest of the issue is more character moments. The book has slowly pieced the team together and has been generous with the action so far. Writer, Bryan Hill, has teased that the action is coming, and it is going to be all out. Right now, he is bringing it all into play. The slower moments are the building blocks for bringing all of the characters together and done in a way that progresses the story while not feeling like a huge speed bump. Feels like something good is just around the corner. – E. Chad Metz