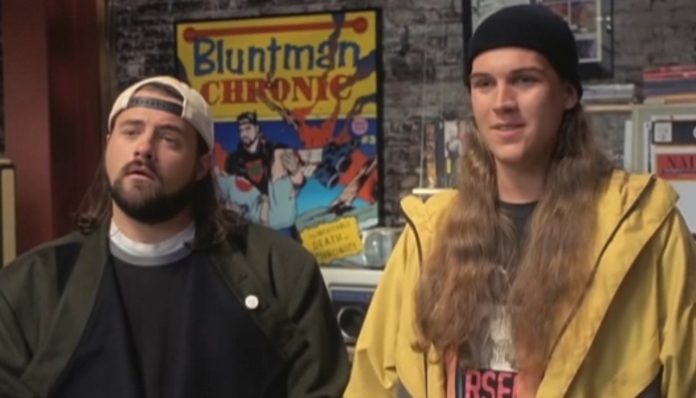 EDITOR’S NOTE: Opinions expressed by BATMAN ON FILM guest contributors are their own and do not necessarily reflect those of the site or the editor-in-chief.

In the wake of Marvel’s shared cinematic universe’s victory lap that is Avengers: Infinity War, let’s not forget the little corner of the indie film world that did it first: The View Askewniverse.

Whether or not you’ve seen or even enjoyed the work of filmmaker/podcaster Kevin Smith, you’ve got to give credit where credit is due: the comic-book loving writer from Leonardo, New Jersey was the first to cross-pollinate his characters and reference his other films even though they were not direct sequels to one another. This would come to be known as the “Marvel Formula.” and while they have perfected the technique and outnumber Smith’s in-universe films 19 to 6, it was the “Fat Man who loves Batman” himself that showed them how to do it long before Nick Fury showed up uninvited at Tony Stark’s Malibu mansion. 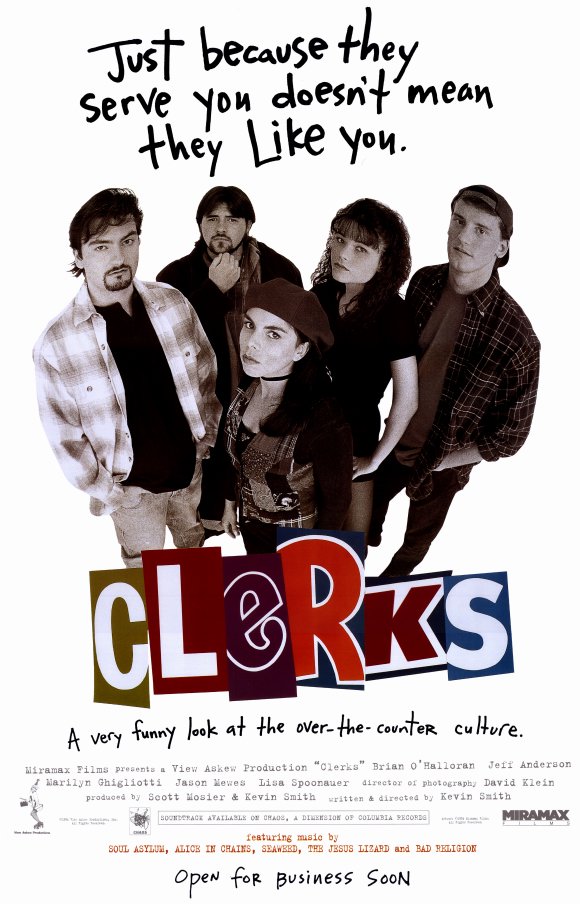 Busting onto the indie scene in 1994 with Clerks, Smith’s tale of 20-something malaise came at the end of the grunge era; with the theme of “shit or get off the pot” coupled with its low-budget, punk-rock mentality, it was the perfect movie for the perfect time. Smith’s dialogue was dense and packed with copious pop-culture references, something we take for granted today. While Quentin Tarantino’s dialogue references pop-culture on a broad spectrum, Smith wasn’t afraid to go deep cuts; even if it meant a wider audience wasn’t in on the joke. He was the first voice in movies that comic book fans could really look to and say, “That’s us!”

As much as Clerks felt like a part of the grunge world, its follow-up, Mallrats (1995), felt like when corporate America got its hands on it, repackaged it, and tried to sell it back. And just like corporate grunge, there was backlash as Smith was called a “sellout.” With studio backing, Mallrarts is glossier than Clerks, in color, and features actual name actors. But Mallrats also goes further into deep-cut nerd territory than Clerks ever dares. While Dante and Randall discuss the morality of Luke destroying the Death Star with possible unnamed independent contractors aboard, it’s T.S. and Brodie who discuss the limitations of Superman’s sex life the way only a hardcore weekly buyer of comics can: in graphic detail. 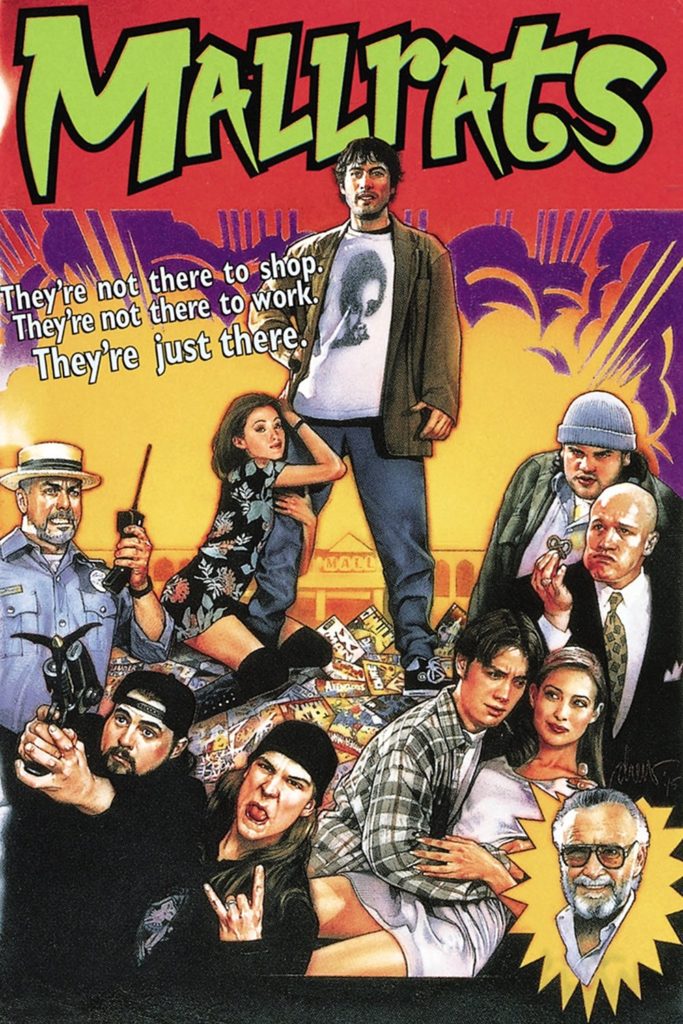 Not only that, but Mallrats also features a comic-themed opening titles sequence, an actual comic book store, a character named “Fanboy,” two loving homages to Batman ‘89, Jay’s pantomime of Wolverine’s beserker attack with his Adamantium claws, and the first cameo by the man who would come to define the very word, Stan Lee. This movie goes all in.

But Mallrats doesn’t just reference comic books via dialogue, it does so on the filmmaking and storytelling level as well. Jay and Silent Bob are the only two characters to carry over from Clerks, but their elevated side-character status across movies is reminiscent of the way Captain America pops up in Thor: The Dark World, or Tony Stark showing up to give Spider-Man advice in Homecoming.

Likewise, events that were established in Clerks play a role in Mallrats. Sure, Julie Dwyer dying of that embolism isn’t on the scale of “The Battle of New York,” but it’s established in-universe continuity that affects the characters all the same. Even minor references tie certain characters together across films, like how Brian O’Halloran plays different members of the Hicks family, or how Randall (Clerks) and Brodie (Mallrats) both recall disturbing stories about their shared cousin Walter. It’s all deep-cut storytelling that had only ever really been achieved in comics. And Smith was doing it — subtlety, mind you — in low-budget indie comedies. 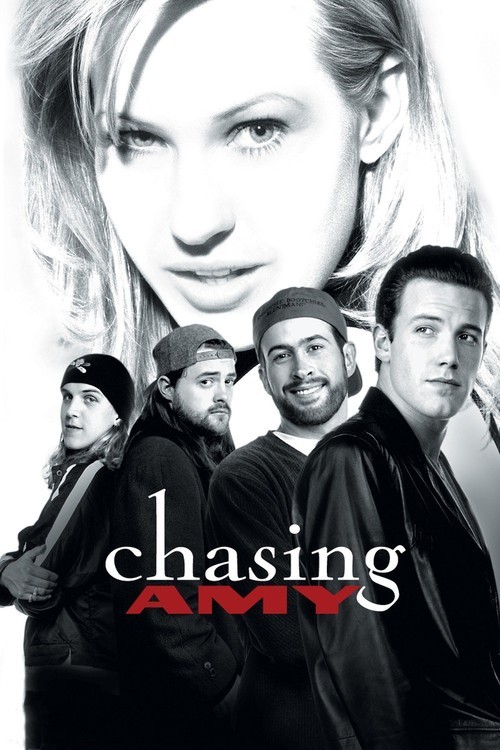 He’d continue to interconnect his films via references and comics (Chasing Amy centers around a comic book writer/artist played by future Batman on film Ben Affleck), but most importantly, Jay and Silent Bob. The characters appeared as side-men in Clerks, Mallrats, Chasing Amy (just one scene!), and Dogma.  But when Smith brought them together for their very own movie, he did what Joss Whedon would do 11 years later with The Avengers: He brought his characters from previous movies back for the first “payoff” film in a franchise.

Jay & Silent Bob Strikes Back is a dumb stoner comedy. It’s also an incredibly self-aware commentary on studio franchises (“Well it’s Miramax so they’ll probably just get Ben Affleck and Matt Damon”) and pop culture culture (“This is a site populated by militant movie buffs, sad, pathetic little bastards living in their parents’ basement, downloading what they think is insider information about movies and actors they claim to despise yet can’t stop discussing.”). The fact that Ben Affleck says these lines — while appearing to be himself one of those sad, pathetic bastards — adds another few rich layers to an already tightly coiled meta masterpiece. 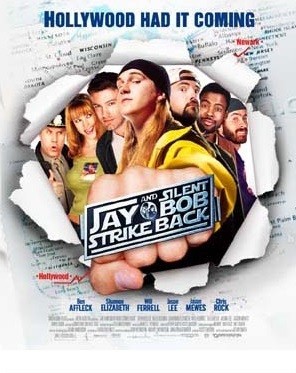 The references and in-jokes that populate J&SBSB are so dense that to catch them all requires multiple viewings. No pop culture stone is left un-turned as Smith takes jabs at everything from Scooby Doo to Dawson’s Creek; from Star Wars to E.T.; and from The Crying Game to She’s All That. Smith’s cameo game is as strong as ever, with Carrie Fisher and Mark Hamill both popping up in hilarious minor roles, but he also gives screen time to comic creators Paul Dini and Joe Quesada. The movie’s self-awareness — and almost cartoon-like tone — allow the references to feel organic, even when they’re coming two, three, sometimes four at a time.

Sure, the characters from Smith’s previous films don’t all share the screen at once in some sweeping heroic climax, but then again, they’re not heroes. They’re clerks and mallrats and comic book geeks and stoners and fallen angels.

And while Kevin Smith may not have told a “comic book story” over the course of the View Askewniverse, he used the same conventions and delivered an experience just as satisfying as any team-up flick out there. – Joey Perotti

Joey Perotti is a husband, screenwriter, podcaster, and all around Batman enthusiast.
You can follow Joey on Instagram via @TopFive5Pod.