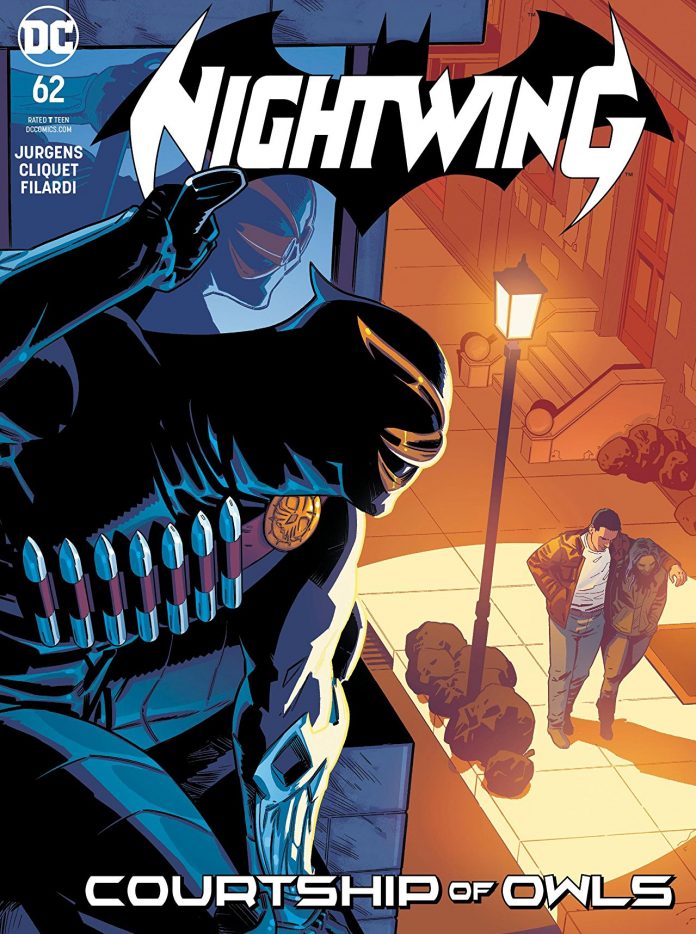 SYNOPSIS: After the epic conclusion to the Burnback saga, it’s clear that while he may have forgotten his past, Ric Grayson’s innate skills and instincts as a team leader elevate Team Nightwing to a new level. But what does that mean for the Blüdhaven PD, and what does that mean for a man who is looking to live a life without the baggage of his past to hold him down? Ric seeks comfort in Bea’s arms, but may find answers in another’s Talons as we dive headlong into the Year of the Villain!  Plus, Lex Luthor delivers the Court of Owls the means to own what they covet most: Ric Grayson.

NIGHTWING #62 was an issue after my own heart.

It was a combination of Scott Snyder’s COURT OF OWLS and Geoff Johns’ BATMAN: EARTH ONE (plus the hype for BATMAN v SUPERMAN) that made me a regular comic book reader.

So I went into this issue with higher expectations than normal due to the Court of Owls returning to Dick/Ric Grayson’s life.

We begin with Grayson jumping off rooftops, saving the day and donning a new Nightwing outfit. The new suit is a silver and black design (kinda reminded me of a cool Spider-Man: The Animated Series action figure from when I was a kid) that looks pretty slick. Luckily Grayson kept the oil face mask disguise, which I’ve liked from the start.

All the while a drone from the Court stalks Grayson and seeks to confirm his identity, surely for some nefarious reasons. Their timing couldn’t be worse, as Grayson takes one big step in his relationship with Bea (no, he’s not marrying her but he did a very comic-booky thing).

I was disappointed to spot a typo in one panel as Bea says “They news says” something instead of “the news says.” Hopefully, this was confined to the digital copy and was fixed before the issue went to print.

Dan Jurgens continues to be the lead writer and Ronan Cliquet was the artist for this issue. The art fit in well with recent issues (Bea and the Nightwing team looked outstanding) but there were some panels where Grayson’s face looked a little off. The best way I can describe it is that his head looked too stocky and his hairline too receded. Then again he was shot in the head a while ago so maybe there’s still some residual swelling…

All in all, this was a fair opening to a new storyline. As the cover suggests, NIGHTWING #62 does tie-in to DC’s “Year of the Villain” thing. I have mixed feelings about this because on one hand, we’re getting more Court of Owls, but on the other hand, there may be some crossover elements that could put them on the sidelines.

This brings me back to Nightwing’s initial Rebirth run when he and Raptor infiltrated the Parliament of Owls  only for that plot thread to take a brief break for the “Night of the Monster Men” crossover to occur (in fact, the only post-Rebirth Nightwing comics I don’t have are #5 and #6 when I tuned-out of the “Monster Men” story).