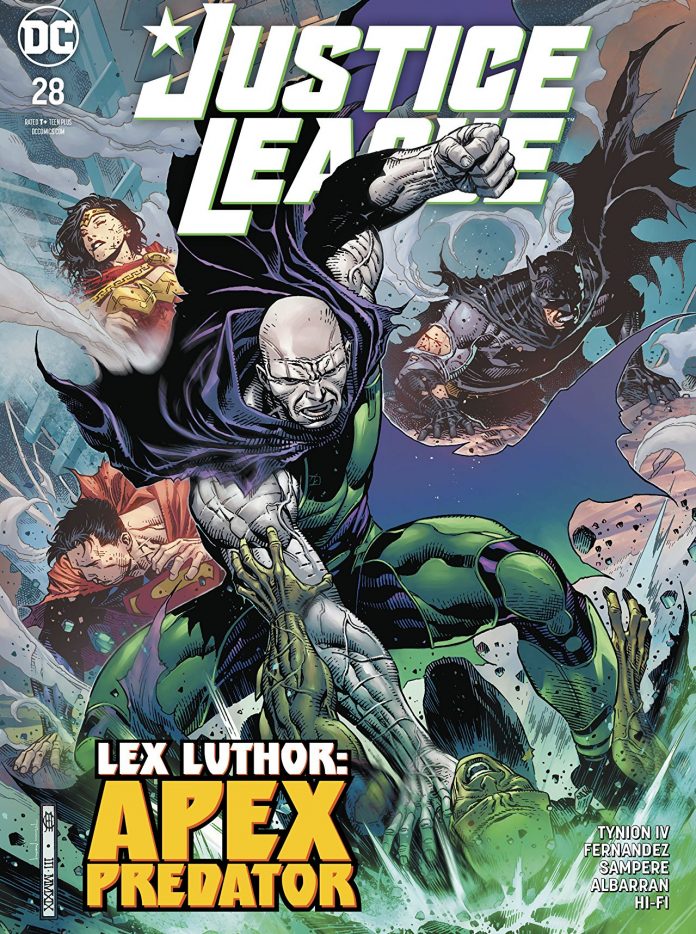 SYNOPSIS: The Apex Predator rises! Justice-Doom War is coming! This is the culmination of the Legion of Doom’s master plan, and they will take the Justice League to far-out places they may never return from…and do things the DC Universe may never recover from.

Justice League #28 serves as the finale to the Apex Predator arc that finds the League on the hunt!

Martian Manhunter and Hawkgirl are tracking down Lex Luthor. The core of the league is searching for the Anti-Monitor with the World Forger and Monitor. Shayne, Star Man, and Jarro are looking to connect with fragments of the Totality to discover what the future holds. Unfortunately, none of them are happy with what they find.

James Tynion IV again serves as the issue’s writer, delivering a satisfying story that ties together Lex and J’onn’s backstory as children, Perpetua’s original plan for weaponizing the multiverse, and the Legion of Doom’s war against the Justice League. Tynion seems to have hit his stride on this series. Luthor’s grand reveal allows him to chew into the wordy dialogue Tynion is so fond of without being a distraction or stick out from the plot. The seeds that have been planted around Lionel Luthor’s martian experiments and Perpetua’s desire to breed human and martian DNA flower nicely.

The side quest of the League in the anti-matter universe feel a little flat, however, and add little to the story besides a cameo from the LOD that has been a bit absent lately. The oddball trio of Shayne, Jarro, and Star Man plays well as three characters left out of the larger action but still dedicated to making an impact. In Shayne, the title has created a character that readers care about and it will be interesting to see how he’s handled as the child of Martian Manhunter and Hawkgirl from an alternate reality.

The artwork is handled between Javier Fernandez and Daniel Sampere/Juan Albarran, but unfortunately, it comes off a bit disconnected between the two teams. Fernandez’s work is solid, despite a couple of awkward page layout choices but the transitions to Sampere and Albarran are apparent and distracting enough to pull the reader out of the experience. Albarran’s inks don’t seem to flatter Sampere’s pencils in places, opting for a hatched scratchiness that minimizes detail and creates a fuzzy finished product. Where Fernandez is sharp and angular, Sampere takes a more rounded and “cartoony” approach. The work isn’t bad, but the combination is not the best.

The high point of the issue is in the confrontation between Lex and J’onn, revealing just what Luthor has turned himself into and how much this character has changed through his connection and devotion to Perpetual, who again is never seen on the page.

The issue does enough to keep me interested in the series and eager for the Justice-Doom War to come, but falls short of the heights achieved in prior issues. It’s well worth the read for anyone invested to this point and contains must-read information to continue on, but wouldn’t be a great issue to give to a new reader to get them hooked. – Garret Grev