SYNOPSIS: Batman versus Huntress! As the Dark Knight delves into the mystery of Sarah Worth’s murder, the only witness who truly knows what happened that fateful evening is Batman’s only hope to clear his name. But another hunter is stalking the mysterious killer plaguing the city-and Huntress has also set her sights on Bruce Wayne! The Violet Vengeance of Gotham unleashes holy hell on Batman as trouble brews above and below the city streets!  And the backup story, “Huntress and the Hunted,” zeroes in on Gotham’s own Violet Vengeance! In the previous chapter, her world was rocked by the gruesome murder of a dear friend…but there’s more to this sinister scene than meets the eye! 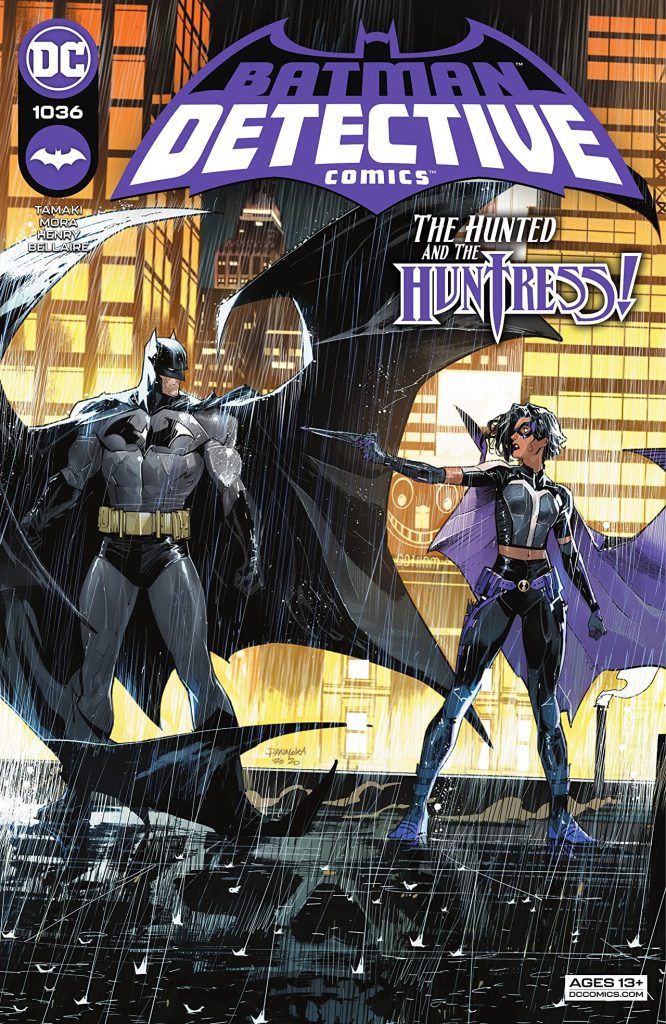 Detective Comics #1036 is the book of the week.  Tamaki nails both the primary and backup stories, again.  This issue will have you bobbing and weaving with ideas and theories of what can, did, and has yet to happen.  Mora’s Batman finally gets the glorious panel he so rightfully deserves. This issue is the reason you got into comics, it’s the reason you buy them every week, it’s a must for your pull list this week!

There is a lot to digest in DC1036 this month.   Tamaki lays out a bountiful spread, one murder, a rooftop confrontation, a mayor on the hot seat, and a crazy new drug on the street.  The murder of Sarah Worth has rattled Gotham to its core. Everyone from the Underground to city hall is feeling the aftershock.  Tamaki lays out this story as a who-done-it murder/mystery.  There are multiple instances of misdirection, and Tamaki pulls them off flawlessly.   The brownstone version of Bruce Wayne provides for many exciting moments and plot devices.

The big confrontation between Huntress and Batman is the highlight of the book.  Not only a big moment for the story but a real tone-setter for Huntress going forward. I appreciate how Tamaki writes Batman in this scene. He is not aggressive, yet sitting back observing the scenario, letting it react to him.  I thought the banter between the two was on par with some of the early moments of No Man’s Land.  You get a sense of these two characters and their stance on justice, and Tamaki nails it.

Well, Dan Mora is just a brilliant artist, genuinely brilliant.  This book does not feel like the previous ones.  I was impressed with Mora’s unique panel placement in past issues; DC1036 feels very classic in structure. An easy-to-follow path of squares and rectangles.   Mora’s skills are on full display for the rooftop scene.  Since Dark Detective, I have been craving a classic Mora Batman panel, and man, does he deliver the goods! Huntress does her best to steal Batman’s panel moment here, but the best panel of the book might be seeing the two of them glide into action.  The lock screen crowd will go crazy for this one.

Mora’s Lady Clayface is impressive and scary at times.  I like Mora’s range here and would love to see him get a horror book asap.  Mora does an incredible job with the “running mud” look for Lady Clayface; it is fantastic.

Let me be the first to say that Dan Mora’s Oswald is the most beautiful version of the character you will ever see.  That is damn near definitive right there.  Bravo!

As I was about halfway through the book, I said to myself, “this might be a modern Hush.”  That big mystery event, close to Bruce Wayne, an ensemble cast in only three issues.  Pair that up with some breathtaking artwork, and you start thinking, right? Just a fun thought.  I believe this is the book you need to be reading as a fan of the superhero comic book genre.  Tamaki gives the reader a classic, vintage story, and Mora provides stunning interiors.  It is everything you want in a Batman book.  Plus, the backup story is incredible, and I never say that.

BUY THIS BOOK, EVERYONE! – Peter Verra 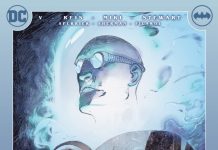