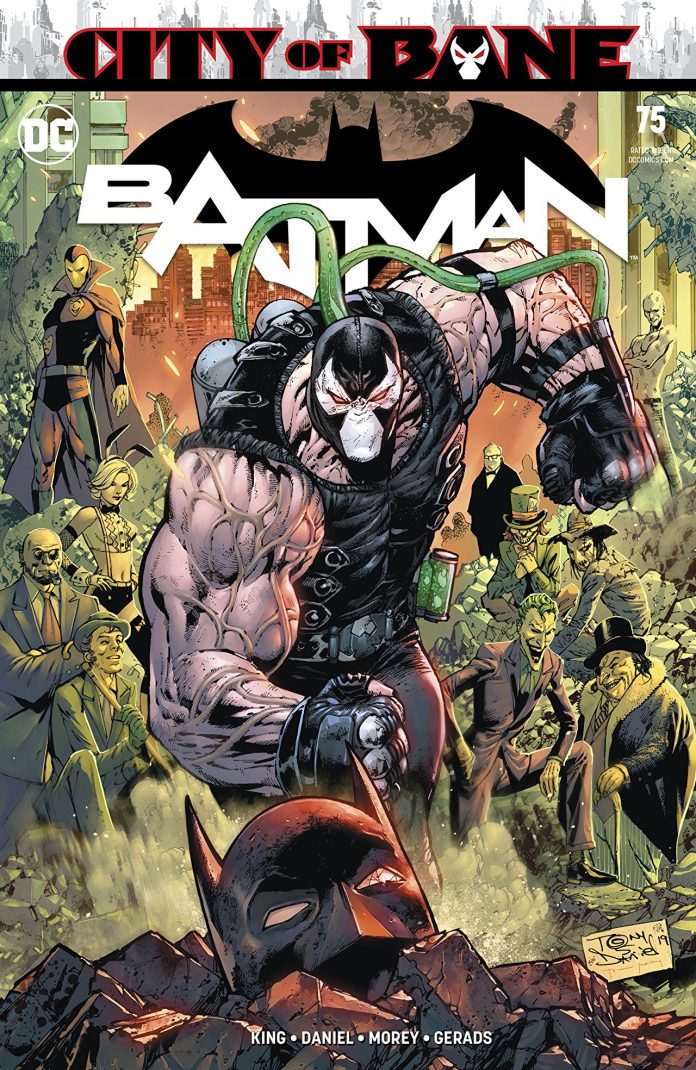 SYNOPSIS: “City of Bane” begins! Bane’s minions have moved into Gotham City, taken control and are ruling with an iron fist—including rounding up any villain who refuses to sign onto Bane’s program—and Batman is nowhere to be found. At least not the Batman anyone knows. It’s like someone has replaced the real Gotham City with a twisted funhouse-mirror version of it.

BATMAN #74 ended with a Batman’s hand reaching out of one of Ra’s al Ghul’s secret pits that had just hosted the end-all, be-all, barrel-chested-bare-knuckle Bat-Brawl between Thomas and Bruce Wayne.

“I’m still here.” But when is here? And where is there?

As much as I love what’s happening in the pages of Tom King’s BATMAN these days, I’m just as ashamed to admit that I don’t always know what’s going on, or when, or how.

Maybe when I read it all over again from the beginning, it’ll make sense.

“LATER,” promises the first of its 38 pages of story. Later, and certainly loonier. Gotham’s top two cops are a pair of cads who found themselves on opposite sides of a major conflict concocted by King in the earlier part of his run, and the commissioner they report to is decidedly not Jim Gordon. And if you think these guys are bad, just wait until you meet the other beat cops.

A Batman still answers the signal, but it’s not supposed to be this one. Not now… whatever or whenever “now” is. This Batman has a butler who can keep a straight face while he’s talking badly about his boss beneath his breath. He has a sidekick who hits harder than any Robin, and powerful punches are only the very least of what she can do. They hunt a criminal who’s been in the Dark Knight’s sights many times and will soon be willing to give anything, including his most prized possession, to have the other Batman back.

So if this is the wrong Batman, where’s the right one? And if he can’t save himself, who can? Whom would you like to save him? Now THAT is a question, isn’t it?

This book is bonkers, and King clearly relishes reveling in the insanity.

The unexpected unfolds across every page. Big questions are asked about Batman and Gotham City; the answers and the askers are even bigger.

We’ve got a broken Batman, last issue had a pit, this one has Bane controlling a Gotham City cut off from the rest of the United States, and then there’s that other important element that appears here. “City of Bane” is Tom King’s THE DARK KNIGHT RISES; it shares a few bullet points but capably and crazily does its own thing in every other way on epic levels all its own.

Tony S. Daniel and Mitch Gerads are the artists here; Gerads colors his own stuff, while Tomeu Morey applies his palette to Daniel’s. All of it’s incredible, but the final eight pages by Gerads are lit like the dirty dreaminess of BLADE RUNNER. I can’t stop looking at them.

There’s been a lot of back-and-forth on this book. Batman’s broken! Batman’s back! But he’s broken again! Now he’s winning! But he was really losing all along! Now he’s ready to take Gotham back! But not now! And maybe not even later!

It’s been a whirlwind for sure, but King’s ability to reframe Batman’s mythology by hitting it from impossible angles is keeping me totally interested and utterly invested. I don’t know what to expect from “City of Bane,” but in the words of Bruce Wayne, “I’m still here.” I hope you are, too. – John Bierly