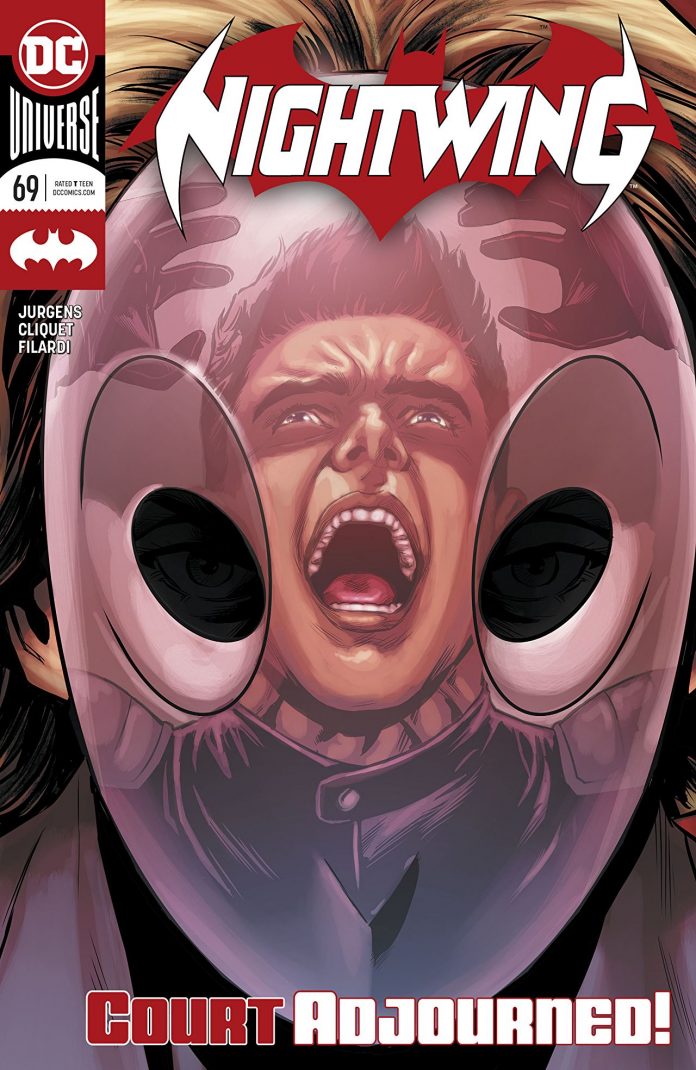 SYNOPSIS: Following the events of October’s Nightwing Annual #2, Ric Grayson is getting closer to the truth about what happened to him. Talon has been vanquished, but his interference has put Ric on the trail of other members of the Court of Owls. Have they been taking advantage of his injured state from the beginning? And what does that mean for the life he thought he lost?

NIGHTWING #69 fixes one important question I had about the Court of Owls’ attempt to turn Dick Grayson into a Talon but otherwise doesn’t stand out too much.

Grayson is suffering from massive headaches that occur up to five times a day. He’s still reeling from the Court implanting memories of a different life where he trained to kill for them and is not sure which life he led. Grayson and his girlfriend Bea hope to find his former brain psychologist Dr. Haas to help him recover. However, Haas has disappeared and they break-in to her office looking for any clue to her whereabouts.

The issue’s title “A very unfriendly owl” is a fun callback to a children’s book Grayson’s Court-allied relatives read to him one Thanksgiving. That said, it’s a tad corny that Bea would carry that book with them to ease Grayson’s headaches when they flare-up. But hey, it’s the little details that get people through life sometimes.

Grayson travels to Switzerland to find Haas and storms a castle wearing a new Nightwing suit. The suit has a little too much red for my taste and I hate to see his impromptu taxi driver oil-grease-mask-disguise go (#RIPtaxidriveroilgreasemask). On the positive side, his new mask has a Kato-vibe to it, which would be appropriate since Kato is a fellow kick-ass sidekick.

Hmm, that’s the second time in a week I’ve referenced Green Hornet (the shape of Battinson’s cowl, especially around the nose, looked very Green Hornet to me).

It’s implied that the Court didn’t plan Grayson’s mind-shattering bullet-to-the-head but merely took advantage of it as Grayson is told, “When KGBeast gunned you down, we had our chance.” I appreciate that clarification because Bane being behind that has more weight story-wise. Many thanks to Dan Jurgens for not retconning that.

Otherwise, this issue was uneventful for me. The art by Roland Cliquet continues to be impressive and there is a very colorful sequence toward the end that was trippy and wonderful to look at. But a sudden, ridiculous decision by a guard brings that scene to an abrupt end. This read like a filler episode in the on-going battle for Dick Grayson’s mind.

Finally, there’s a subplot that bookends the story that at first glance I’m not looking forward to. More on that next time. I have been wrong about my misgivings on occasion! – James Armstrong