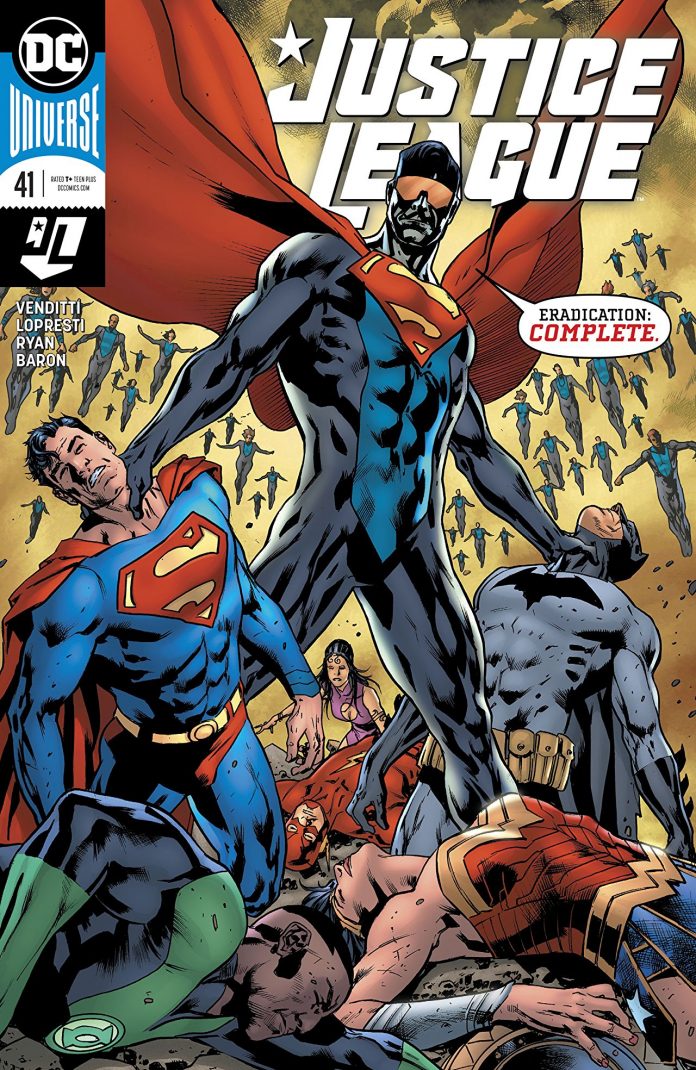 SYNOPSIS: Invasion of the Supermen! Eradicator and his strike team sweep across Earth with devastating consequences. The Justice League finds itself battered and overwhelmed by an enemy more powerful than even Superman. Batman and Green Lantern plan a counter-assault, but it can’t work without the Flash, whose connection to the Speed Force has become unpredictable-and possibly fatal. With the team at half-strength, will it be enough to hold their enemies at bay?

When the Eradicator first came into prominence in the 90’s he was one of four characters that were positioned to ask the reader to think about what would happen if multiple Supermen looked to take up the iconic S shield in the absence of the true Superman as Earth’s protector.

In Justice League #41 we see what would happen if Eradicator led a group of beings with all of Superman’s powers, none of his weaknesses, and with the goal of eradicating life on Earth in order to establish a new Kryptonian colony.

After I posted my review of the previous issue of JL, I noted on social media that an aspect of the issue that didn’t make it into what was published included my feelings that the storyline unfolding in the title bore some influences of the 2016 film Man of Steel in which a remnant group of Kryptonians looked to reform the Earth in the image of their home planet in order to preserve their race and culture. The current storyline, “The Invasion of the Supermen,” positions The Eradicator in the role that General Zod held in the film, but the army he brings to the Earth is much more threatening than the few troops Zod commanded. In fact, they seem to be invulnerable.

Justice League #41 is a little light on plot but it’s heavy on action, dedicating the majority of its pages to an all-out war between the League and the Daxamite (Kryptonian descendent) forces as their powers continue to grow under Earth’s yellow sun. The battle scenes show a League outmatched, as their individual and collected abilities fall to the brute strength crashing against them. Writer Robert Venditti and artist Aaron Lopresti craft a fast-paced battle with enough dialogue to keep the character voices present and enough visual spectacle to dazzle the reader. Outside of the fight scenes however, the story suffers a bit.

While the rest of the league is caught up in battle, Batman seeks the assistance of Madame Xanadu in London based on the theory that the Daxamites may still be susceptible to magic. Solid enough logic and it keeps our mortal Batman away from the carnage of the invading super-powered force, but that isn’t enough to save this section from some clunky dialogue regarding his role as a “knight” in order to gain Xanadu’s support.

Equally uninspiring is the conclusion of the issue where The Eradicator addresses every corner of the globe, broadcasting a message of doom in the native language of all the people watching.

Now, why does this seem so familiar…

While the section plays out just fine in the issue itself I have to believe a writer of Venditti’s caliber could do a bit more to disguise the influence of Man of Steel. I will say the surprise reveal at the end of the issue is effective enough to build anticipation for the next issue. I’m looking forward to reading it, and I believe this run is very promising, but I hope the originality can be increased and the plot goes a bit deeper than delivering fun exciting fight scenes after the promise of the superior previous issue. – Garret Grev