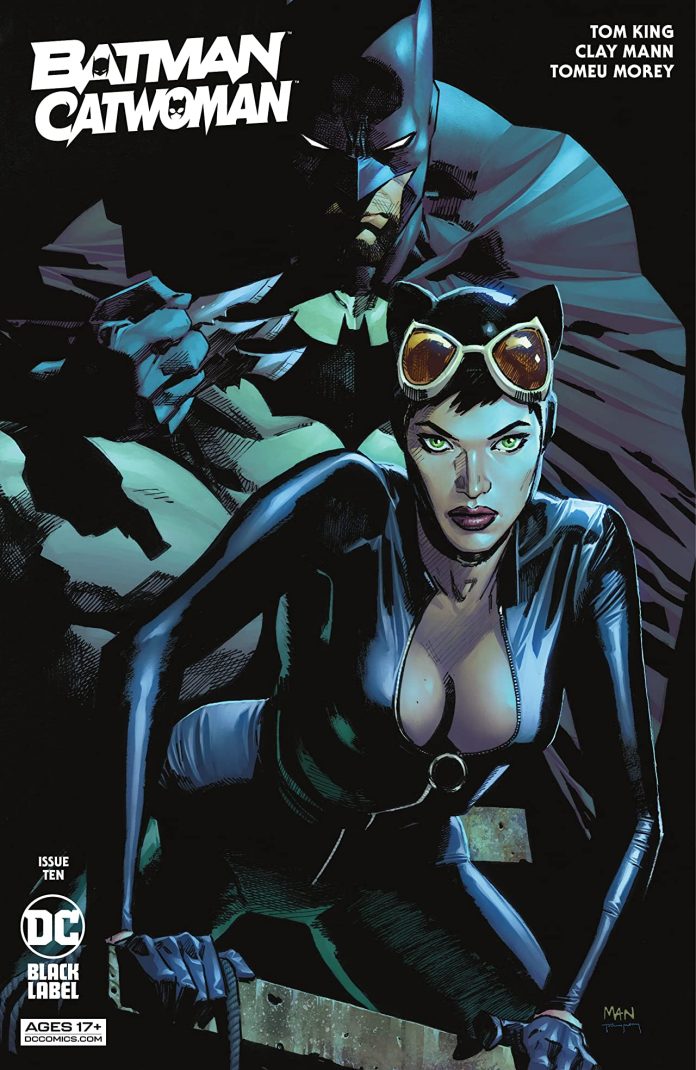 SYNOPSIS: Don’t mess with Catwoman! As our three storylines experience a rare moment of convergence, Selina fights for her life against The Joker and her own daughter, Batwoman. What secrets from her deadly friendship with the Clown Prince of Crime will cause this row between mother and child? Find out in an action-packed issue that proves this cat can fight!

Clay Mann is back!

For those who didn’t care for Liam Sharp’s more surrealist take, the crisp, clean linework of Mann makes this series feel back at home, at a point in the story where allegiances and ideologies are challenged in all three timelines!

The eras can change fast and furious as the story progresses, with each blow potentially transitioning us into one of three spaces. As Selina duels with the Joker in the past and present, shaping who she will be for decades, the result of those decisions struggles with her daughter in the future.

King makes the fight one of identity and revelations as much as it is punches and kicks. Joker is downright vile, trying to be as vulgar as possible to throw Catwoman off her game and get under her skin. It feels like King watched the Batman/Joker scene in Zack Snyder’s Justice League with a dash of Frank Miller thrown in. This Joker has no qualms when it comes to being offensive, be it words or deeds, so long as he gets a reaction.

Of course, Selina’s deep insight is that the Joker is sane. In proclaiming this, as she’s beating Joker to a pulp, no less, she adds that she, along with several of the more infamous of Batman’s Rogues Gallery, are indeed out of their minds. I don’t quite agree with this when it comes to Selina and Penguin, but I suppose that can be up for interpretation depending on what version you are discussing.

As for Joker, if he’s not insane, that makes his evil all the more terrifying. He exists solely to be the opposite force of The Batman, and as such, must lay claim to Selina as well. Caught between these two men, Selina is like the metaphorical cartoon character who has an angel on one shoulder, a devil on the other, and each is trying to sway her. We already know what happens when the angel goes away and this issue foreshadows that event in the past and present timelines.

The changeovers are done so well in this issue and while Mann’s storytelling is clear, it does require you to pay attention to the artistic clues. King sets a fast pace, making for a dizzying read as we hurtle back and forth between the three eras.

With two issues left, it’s safe to say this isn’t the Batman story we expected, as he once again takes a back seat in the narrative (he’s in two panels, one of which he’s unconscious in). Phantasm is also left out in the cold, fitting given the blizzard that has overtaken Wayne Manor in this issue’s intro title spread. A part of me should be disappointed by this, but I am just fully engrossed in Selina’s story. Furthermore, now I want to learn more about what Helena is so angry about!

After a long absence, (his last issue was Bat/Cat #6 back in August of 2021) Mann is in top form. His Joker is wicked, his Catwoman is strong and sleek, and I dig the Batman Beyond vibes that Batwoman’s suit gives off. Narratively, I do feel a bit of a disconnect after the change back in art styles, but the emotions and conflict in the story run high, making for another captivating read. – Javier E. Trujillo

Batman to be Older in BATMAN v SUPERMAN (Exclusive!)