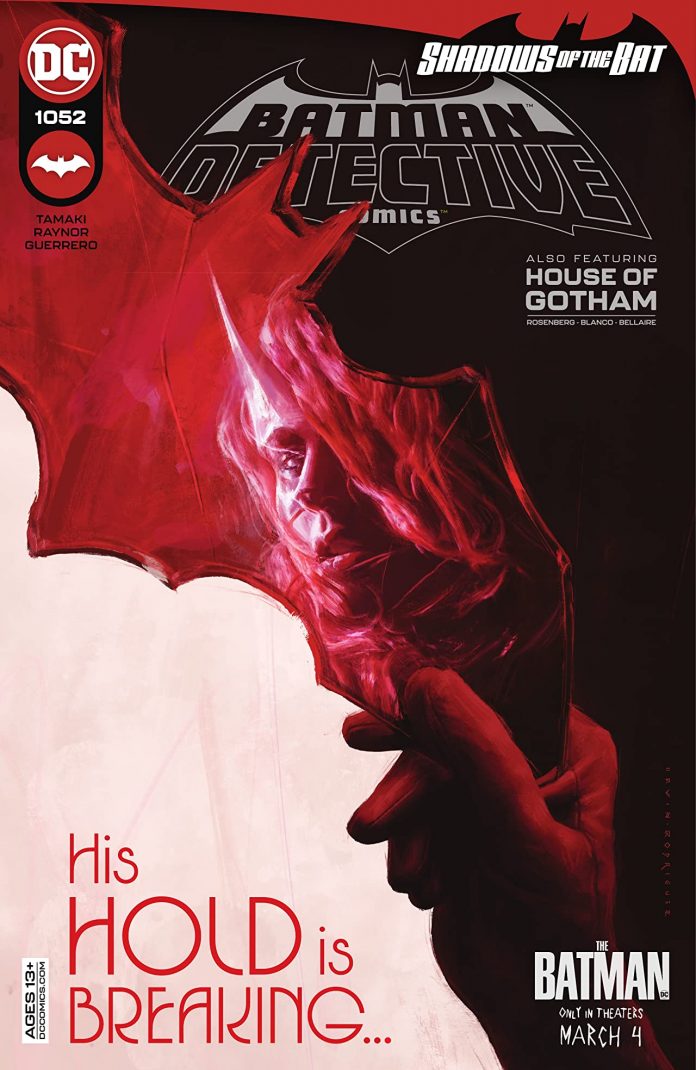 SYNOPSIS: “His hold is breaking!” That’s the message written in blood across the minds of Arkham Tower’s inhabitants, after a nightmare melee is unleashed! With Gotham’s deadliest criminals reverting to their former, murderous selves in one horrific night, Dr. Wear has a lot of explaining to do…and a lot of covering up to perform. Can Nightwing get to the bottom of this mystery before the people of Arkham Tower are put in peril again? Plus, Batman’s iron grip on Gotham is enough to drive the desperate to madness…and madness is on the mind of the Boy in part six of “House of Gotham.” When an average night at coat check at the Iceberg Lounge turns into a violent battle royal between the Dark Knight and the Penguin, lines are blurred, people are hurt, and the Boy’s descent into a life of crime deepens…

Last week we saw Psycho-Pirate lose control of everyone in Arkham Tower, leading to an all-out battle royal between employees and patients.  Detective Comics #1052 gives the reader an even deeper look into those events from various perspectives.  At the same time, Oracle and her team try and put all the pieces of Dr. Ware’s puzzle together.  Tamaki and Raynor are back at it in the primary story while Rosenberg and Blanco’s back up continue the adventures of Gotham’s most unfortunate red-headed youth.

This issue is one of Tamaki’s most balanced issues to date.  Tamaki gives the reader tons of detailed exposition through the eyes of Dr. Chase Meridian as she experiences her worst day of work ever.  Psycho-Pirate and Dr. Ware fight to regain control of Arkham Tower while trying their best to tie all loose ends.  This issue is the most we have seen Dr. Meridian since Shadows of the Bat began.  We know the mind control at the hands of Psycho-Pirate has taken a toll on Dr. Meridian and Huntress specifically.  The reader sees how Psycho-Pirate can affect someone personally by basically using Dr. Meridian as a puppet.  In contrast, it seems that Huntress may be the patient whose mind is strong enough to figure all this out from the inside, just as Nightwing thought issues back.

We got some backstory on the Psycho-Pirate/Ware relationship in the last issue.  After seeing the extent of Psycho Pirate’s powers in these previous two issues, it does make you wonder if there is more to it.  What else does Ware have on Psycho-Pirate?  We are halfway through the storyline, and we have as many questions as we do answers.  Tamaki keeps readers on the edge of their seats and in the dark, just as a great storyteller should.

Led by Oracle, Batwoman, and the Batgirls provide some very efficient detective work that would make Batman proud.  Seeing this group go about the planning process and following through with execution is short and sweet but ever so satisfying.  Tamaki is brilliant at crafting tactical dialogue.  Moments like this should make fans even more excited that ¾ of this team is in the new Batgirls book.

It took me two issues, but I finally realized who Max Raynor’s art reminds me of, Jorge Jiménez.  The light bulb didn’t go off until I saw Raynor’s, Barbara Gordon.  Then I could see all the similarities.  Raynor’s clean, stylized look is similar to Jiménez’s.  Raynor mixes squares and rectangles for a unique look while emphasizing the tense moments.  There are just a few times where it looks like Raynor forgot to draw the Bat logo on Cassandra Cain’s costume.  The fact that it happens more than once creates a distraction.

Mathew Rosenberg insists on going toe to toe with the primary story in a fashion that not many backup writers can do.  House of Gotham is a tale that showcases the life and times of a troubled youth trying to make his way in Gotham City.  Our red-headed friend is now under the care of Oswald Copplebpot.  This story, in a way, reminds me of old gangster films where one family associate has a bad case of loose lips.  Here one of the “two yutes” runs his mouth in front of Jason Todd, resulting in Batman doing what he does best.  While our red-headed friend is brilliant, he figures out a new Robin.  He does find himself in plenty of dumb situations, and if you listened to the latest BOF podcast, you know double-crossing the Penguin is never a good idea.

Fernando Blanco again joins Rosenberg as the artist of the story.  Blanco provides a wonderfully drawn book with easy to follow panel structure.   The moment where the unnamed boy turns on Penguin will remind readers of when Batman visits Lex Luthor in jail during BvS.  I love what Blanco and colorist Jordie Bellaire do with Jason in the ice cream parlor.  It’s straightforward but having Jason wear and pop up his “red hood” is just a cute moment that Bat-Fans will pick up on.  Blanco also draws a fantastic-looking pixie boot Robin in the few short panels we see the Boy Wonder.  My only gripe with Blanco this issue is there is one panel where Batman crashes through a window that makes me think of Denny Cowan on Batman Confidential.  Take that for what you will.

Detective Comics #1052 is yet another stellar issue and should be on your pull list for new DC Day.  Tamaki has reached the midway point and still has the reader guessing — it’s not the type of story where you can see the writing on the wall.  Fabulous storytelling with some great action along the way.  When Shadows of the Bat began, I thought it would need to pick up the pace and needed more eye candy.  I’m happy to see that both problems have been rectified.  The backup stories for Detective Comics have been above and beyond better than those in other DC books I have been reading.  Two quality writers at the top of their game are just what you need to sell a book slightly overpriced, even with the few artistic errors that should not sway you from picking up this book.  Sit back, enjoy and wonder what will happen next! – Peter Verra