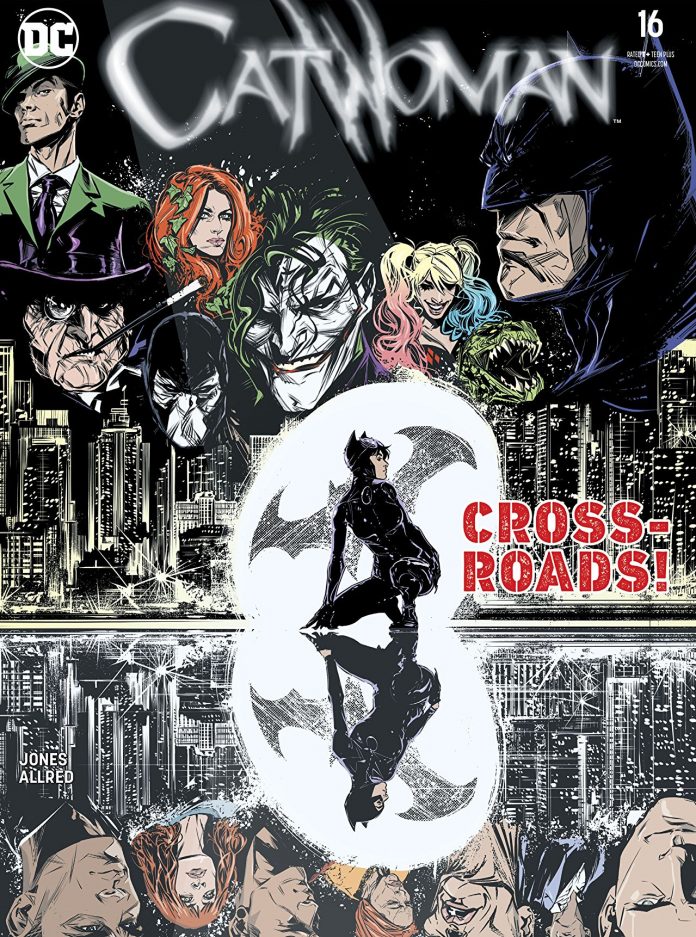 SYNOPSIS: Selina Kyle joins the Year of the Villain! Finally, Lex Luthor’s gift to Catwoman is revealed. While she wants to remain on the side of good, some habits are too hard to break, and some treasures too tempting. Plus, the gift puts Catwoman one step ahead of her top criminal rival in Villa Hermosa, the diabolical Raina Creel. In this big new story arc, Eisner-nominated writer/artist Joëlle Jones brings together the many plot threads she’s been building since the series’ launch, prepping Catwoman for her next grand adventure. But will she come out the other side as a hero…or villain?

Finally, finally, FINALLY, Joëlle Jones’ sublime artwork is back in the pages of Catwoman.  That alone marks this as a great day, my friends, but before we get into specifics about the art (which I could go on and on about), let’s chat about the story right quick.

Jones, in true Jones fashion, drops us into her story in the middle of the action, and not only that, but she also jumps back and forth through time in this issue.  It can be disorienting, even a bit confusing, but Jones has pulled us through these murky depths before.  Here’s how this one breaks down: at the outset, Catwoman lies beat up, crawling on her hands at knees at the edge of the Lazarus Pit, but flip the page and we’re in the future and Selina is shaking down baddies at a kid’s birthday party in order to discover the whereabouts of the one who initiated the beating by the Pit, Raina Creel.  Flip again, and we’re back to the events at the Lazarus Pit.  Jones alternates between past and present, the whole issue culminating with a beautifully ominous image set back at the Pit where Selina rises from the surface of the water decked out in a pretty spectacular, retro-looking Catwoman costume…

Yes, there is a lot going on in this issue, but Jones has been known to throw the reader into completely unknown territory with a promise of a future payoff.  A few times I wasn’t sure if I had missed a page, or if there was something going on that I simply wasn’t aware of, but in either case, I was invested and along for the ride, diving headlong into the unfolding mystery.

And this is why I love how Jones structures her narratives.  It keeps things fresh, it keeps you guessing, and it keeps you coming back to the well (or perhaps the Lazarus Pit?) for more each month.

Okay, let’s talk about the artwork.  It’s gorgeous, okay?  GORGEOUS.  Jones has a flawless style — Selina is so perfectly captured, textures are refined, architecture is superb… the whole issue is unequivocally breathtaking.  And the colors by Laura Allred take the book to dizzying heights.  Her powerful punctuations of color positively explode off the page.  The Jones/Allred duo reaches critical mass in the center of the issue when Selina’s epic whip beat down intercuts with a birthday boy whacking a piñata… I’m telling you, artwork in comics doesn’t get much better than this.

If everything up to this point wasn’t clear, I’ll put it plainly — grab Catwoman #16 this week.  And don’t worry if you aren’t totally up to speed on DC’s Year of the Villain arc, because I’m certainly not, and at the end of the day, that did not disrupt how much I loved this issue. – John Funderburg

Happy 25th Anniversary to BATMAN: MASK OF THE PHANTASM!