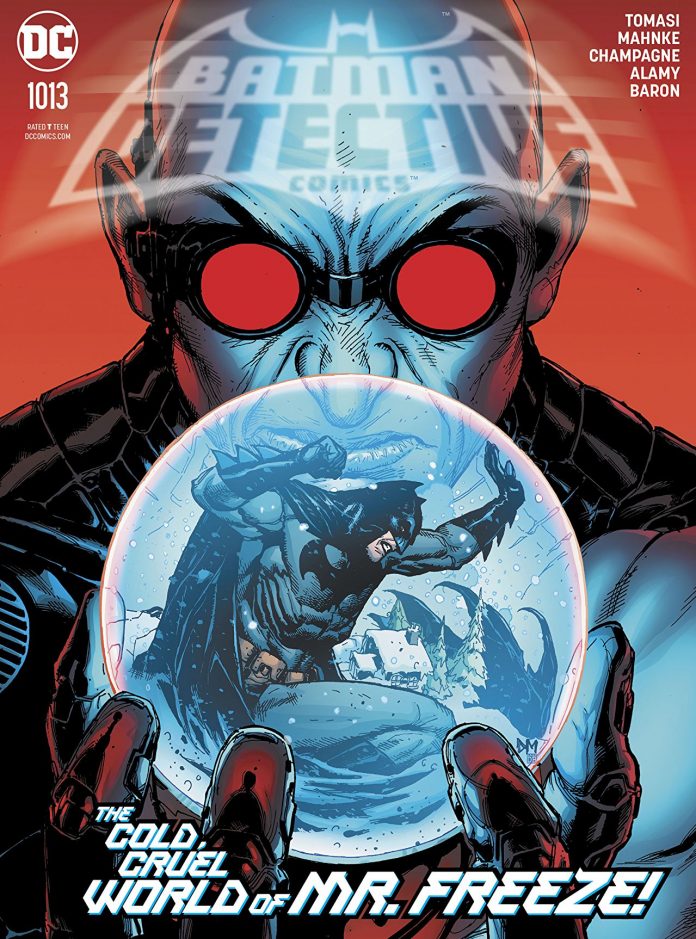 SYNOPSIS: Mr. Freeze is so close to reviving Nora but Batman can’t let it happen. Mr. Freeze has never been more vicious or more deadly. There’s nothing more dangerous than a desperate man with a cold gun and Gotham City is going to learn that firsthand!

Last we saw in Detective, Mr. Freeze was kidnapping and experimenting. Batman had his ear to the ground and Doug Mahnke was drawing some beautiful artwork.

Well, it just gets better and better with every issue. There’s a bit of Schumacher, shades of Batfleck and “ice zombies” all while simultaneously being an interesting story.   Tomasi continues to add his personal flair to our villain while honoring the character’s history and shocking the reader.

Detective Comics #1013 is truly wonderful at its heart. Tomasi has the motives for the characters in all the proper places. He just adds a little something to each villain recently from Arkham Knight, Joker and now Mr. Freeze. Tweaking them not rebooting, these are fresh takes that readers will enjoy.

This might have been the best Alfred and Batman moment I have ever read. Tomasi opens the books with a bang, just wait and see how he finishes it.  The opening scene is vintage Batman and could very well have been influenced by that Batman/Flass scene from Batman Begins. Just add Alfred into the mix Saw style and you won’t find a more definitive scene in a book this week.

My only real knock on the book is that I’ve recently praised Tomasi for writing a story about a Batman without tech/gadgets.  Well, here comes our Dark Knight looking more like Batman Beyond meets Heatwave.  I mean jeez, that was a bit much don’t you think? I don’t mind the function of the suit it’s more about the “fashion”. It’s just personal taste let me know in the comments section below if you agree/disagree.

Mahnke knocks another issue out of the park. It’s almost like Mahnke ripped out parts of Batman on film’s past for this book. His Batman is a Batflecking brute and intensely intimidating.  I wasn’t feeling the bare arm look the last issue but it’s grown on me. I’m really digging Freeze’s constant scowl throughout the issue, its almost like he is in constant disgust with those around him and their incompetence.  Colorist David Baron really makes this Freeze look great. This is a great shade of neon blue to the skin, the dark shadowing, and backdrops, the red of his goggles. They nailed this look perfectly. It’s hard for even this old school fanboy to admit but seeing Batman take out a hoard of “ice zombies” was a kick-ass experience.

Detective #1013 is honestly a book for all Batfans. It’s got a little bit of everything to please fans of all incarnations of Batman. From the dark and battle-tested rooftop brawler to the more over the top nature of a Schumacher film, Detective #1013 will be sure to tickle your fancy one way or another.  This is turning out to be one of the best Freeze stories in good long time.  Hitting close to home with this grounded rougher take to Mr. Freeze Tomasi is really on to something, taking a classic villain to new heights. This is one book that needs to be in your pull list this week!  Its old school comic book fun! – Peter Verra