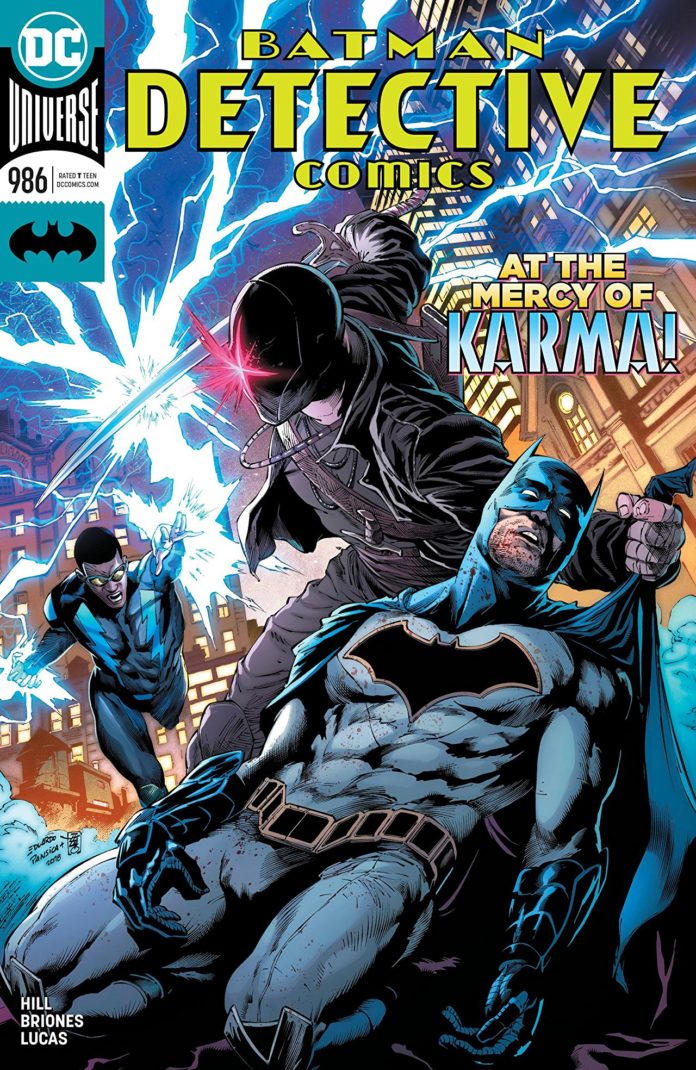 SYNOPSIS: Black Lightning, the Signal and Cassandra Cain are working very well together…but now they’re up against a foe who can tap directly into their worst emotions and play them like music! When you’ve seen the kinds of horrors these poor souls have, there’s plenty of trauma to work with…and with that, you can turn these heroes into deadly weapons! Meanwhile Batman’s “side project” has been revealed—what are the Brainiac Files, and what, exactly, does Batman plan to do with them?

I believe the smaller team in this Detective Comics run, works in favor of the title.  Bryan Hill allows the reader to focus on what is going on in the moment.  The reader won’t have to juggle the major subplots that the last arc really depended on.  This is a tale that cuts to the chase.   In this issue while there is a solid amount of action, the heart of the issue is Barbara Gordon.  Since Karma has arrived on the scene the Bat-family is under lock and key and tension is starting to rise.

Barbara Gordon is not happy to say the least. She doesn’t understand Jefferson’s role on the team and shows a huge lack of respect towards him.  Honesty though can you blame her?  Babs survived a near fatal gun shot by the Joker, fully recovered and has been protecting Burnside since the New 52. If anyone is capable of handling herself, it’s Babs. Well not according to Batman. In two separate scenes Babs let’s herself be heard, loud and clear.  They play out like scenes of a family drama such as Party of Five. Hill really shows off his television writing. (He is a writer for DC Universe’s upcoming TITANS) The older sibling/parental figure is trying to get through to the younger sibling but they are not seeing eye to eye. One can very well make a case for Babs in the story. As Jefferson seems to have been just appointed babysitting duty and not much else.

While Barbara is vocal about the current state of the Bat-Family, Hill delivers a fun search and rescue story.  Karma has killed a reporter on live TV and kid napped a school bus full of kids, the public is frantic and in panic.

Just like that Batman sends out his own signal, to reassure the public he is indeed on the case. Four issues deep and Karma still has the upper hand on Batman. Batman has picked up on a few things during these interactions with Karma but it’s not enough. With his back against the wall he has to reach out to a former Outsider for help. Which one? Come on now! You know I’m not spoiling that. Head to your local comic shop son!

Phillippe Briones is once again the interior artist on Detective.  I have really enjoyed Briones stay in Gotham.  The panel placement in the book really stands out, all sorts of rectangles, angles and edges.  Characters don’t always stay within their confined panel.  It gives the book a unique look almost a character within the story itself.

Briones really excels with brooding vigilantes standing stoic on rooftops. The moment Orphan arrives on the scene the artwork hits over drive.   Batman and Orphan standing on the rafters of a building is as good as it gets. Briones and Hill do a great job going back and forth between rescue mission and the fight between Batman and Karma.  Both are just as equally entertaining and beautiful to see on the page.  Karma is two steps a head, but Batman has his faithful utility belt full of gadgets.  One of the better action pieces is the teams exit from utmost certain danger.  Capes, grapnel guns and a motorcycle, just the tools you will need for a thrilling night in Gotham City.

Colorist Adriano Lucas name has come up often in these past couple reviews.   Lucas provides a colorful look to the book and Gotham.  There are oranges and blues used make me think of Michael Bay films.  I love what Lucas did with the backgrounds during the fight with Batman and Karma creating a sense of urgency, as Batman can’t get the upper hand of his new foe.

Detective #986 is a fun time in Gotham, Briones and Lucas show off their talents wonderfully in the art, while you can see the dramatic writing style by Hill on full display to Barbara Gordon’s dismay. The search and rescue mission is a real pleasure to see, while the Bat-Family might not be in the best overall state.  In the field Orphan, Black Lightning and Batman’s work does not suffer.

“Leave Karma to me. Save the children. Follow the light.”

My only knock on this run is I would like to see Jefferson Pierce be more hands on with the team, he is giving more pep-talks than leading training sessions. With one issue left on this arc; Hill must have an epic finale to his story.  Batman is on the ropes, calling for backup while keeping his team in lock down. Barbara Gordon is almost as disgruntled as Dick Grayson ever was.  Tensions are high and the public needed reassurance in the Dark Knight.  Will Batman be able to combat this new foe while playing things ever so close to the chest?  We won’t find out until the next issue drops 8/22/18 the suspense is going to drive me insane!