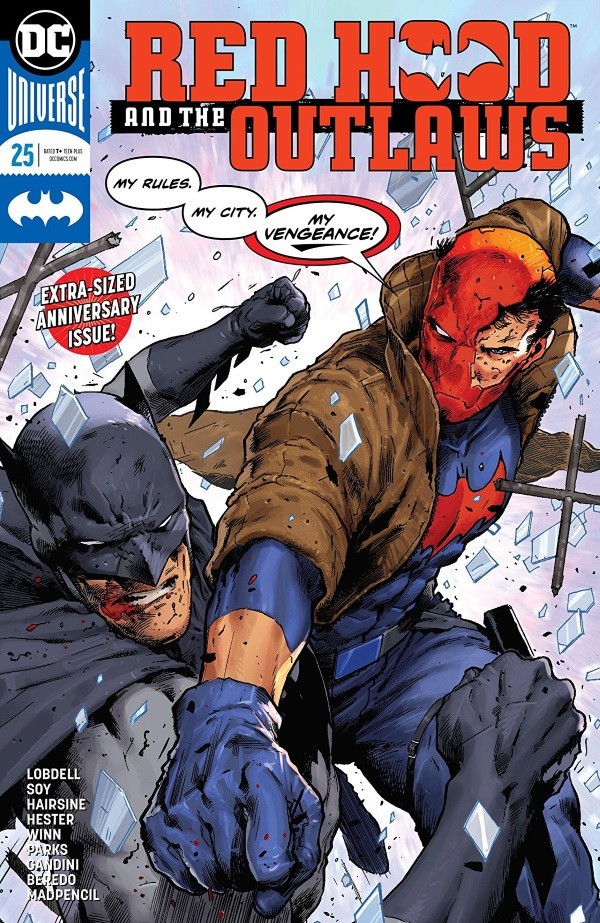 SYNOPSIS: Batman versus Red Hood for the right to fight in Gotham-grab your ringside seat for the battle 25 years in the making! Jason Todd broke a promise to his mentor, and must now confront an angry and betrayed Batman. That means a good time for readers, but probably not so much for Jason: it’s likely going to take more than the Outlaws’ help in order for the Red Hood to avoid wearing an orange jumper in prison.

Usually it’s ideal to avoid spoilers in a review. However, I can’t write about this issue without spoilers. Feel free to click off this page, pick up the issue, and come back to hear my thoughts. If you have read it or don’t care about spoilers, let’s dive in!

Last issue Jason shot The Penguin point blank in the face. You read that right. Not only did he shoot him, he shot him on live television. Naturally this peaked the interest of our favorite detective. Is Oswald Cobblepot dead? That’s not been shown or said. I can say I’m pretty excited to see what Scott Lobdell has up his sleeves.

The opening pages show us a flashback of Jason as Robin submerged underwater. What looks like Batmobile wreckage is beneath the water with him. Alfred is advising him via headset to swim to the surface before he runs out of air. Jason refuses. Swims to the wreckage and pulls Batman out. They reach the surface, but Batman isn’t breathing. Jason performs CPR and Bruce comes to. This turns into a really touching moment between Jason and Bruce.

That opening showcases what Scott Lobdell has been doing this entire run. It’s all about Jason’s character. He is stubborn and headstrong, but it usually comes from a good place. That makes it all the more tragic to see him go through the meat grinder known as Gotham City. Again.

This issue does one thing above all else really well; it works in an entire cast of characters, just to tear them down to see how they work. Bruce and Jason has the showdown we’ve been waiting for. Kinda. It’s not splash page after splash page. There may have been a total of five blows thrown combined. This conflict isn’t a totally physical one. It’s surprisingly emotional. If you’ve been following the Batman proper series, you know Bruce is in a bit of a rough patch. Jason breaking his promise did not help things at all. Luckily, Bizarro pulls Jason away at the perfect time.

This is the part of the boik where the tears will be shed folks.

The invisible airbase (which could really use a name), The Outlaws call home is slowly falling towards Gotham City. Bizarro programed a failsafe into the ship, causing it to self-destruct if he lost his genius level IQ. This serves as a great “ticking clock” to add tension to the moment. Artemis and Bizarro have ran through every option they have. Bizarro makes a decision that almost broke my heart. He opens the Quantam Door, grabs some electrical tubing, and flies into the wormhole. Artemis decides to go after Bizarro. She finally kisses Jason before throwing him onto a neighboring rooftop.

Jason can only watch as his new family and his home are taken by the wormhole. Naturally, this is when Batman strikes again. I wasn’t crazy about how Lobdell handled the caped crusader this time. The first fight was a well-deserved emotional payoff. All about how Jason thinks Bruce’s one rule is a joke. The second confrontation was unnecessary and was only there to show Bruce rip the Bat-symbol off his chest, to call back to the flashback from the start of the issue, and to show Roy Harper come back into play.

We close out the book with a very surprising series of revelations. Ma Gunn is visited by The Solitary. You know, the guy with the rapidly vibrating head. Sorta resembles Reverse Flash when he is going incognito. There it’s revealed that Ma Gunn is actually Jason’s Grandma. Which she knew the whole time? Also, it turns out The Solitary is actually Willis Todd. Jason’s Dad. So, Artemis didn’t kill him? Was this because of the scientific experiments he was a subject to? Man, Lobdell intrigued me and made me feel like I was watching Mystery Inc. unmask someone all at once.

Lobdell’s run has really culminated to this issue. While there have been quite a few moments of action and comic bookiness throughout this series; it’s always been about these characters. I’ve always been a fan of Jason Todd. This book shows how dynamic of a character not only Jason is, but Artemis and Bizarro. I mean, Bizarro!

Scott Lobdell has really stepped up his game with every issue. This book isn’t only his baby though. Dexter Soy has also really flexed his muscles throughout this series. His characters and cityscapes have really set a bar for incoming artist Pete Woods. I’m not only going to miss this incarnation of the Outlaws; I’m going to miss the team behind this book. – Justin Lee

Justin Lee is a lifelong Batman fan from Tennessee. He is married to the love of his life and is nervously preparing for his first child. Justin is also a huge Noir and Horror film fan. Some of his favorite Batman related things are; Scott Snyder’s Run on Batman, Gotham Central, and Batman: The Animated Series.