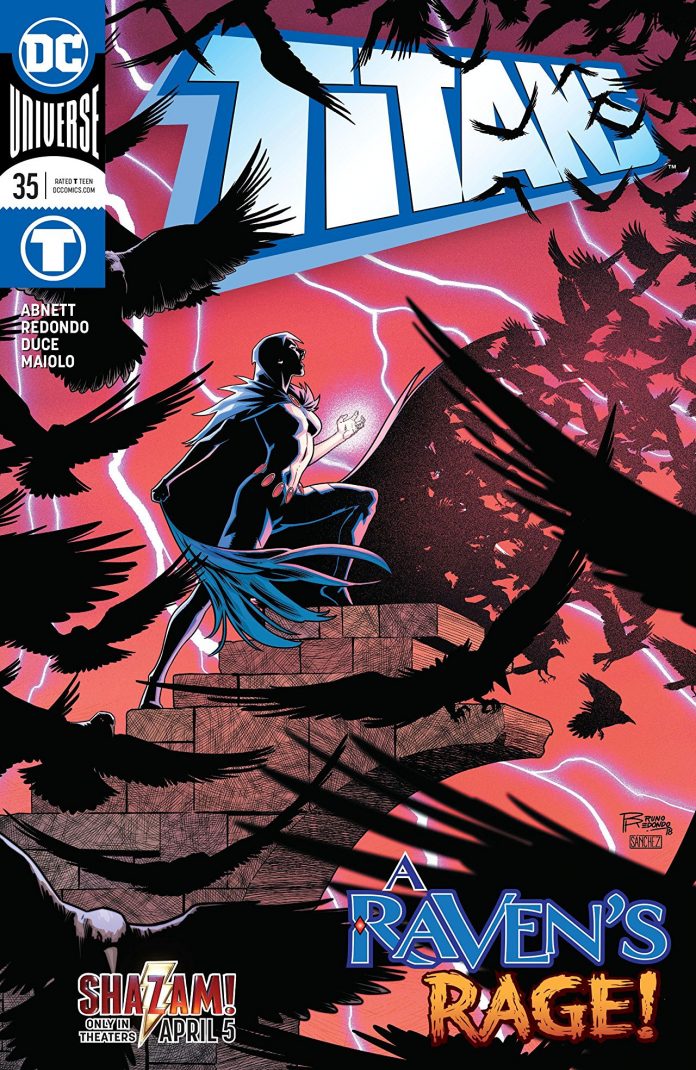 SYNOPSIS: “Into the Bleed” part three! Travesty and Mother Blood are holding all the cards as the Titans’ hopes for saving their friend and the world are dashed by a humiliating defeat. This may be their darkest hour, but hope comes in the form of Ernest Hinton, who birthed the lands of Unearth from his own psyche and is being used as a resource by Travesty and Mother Blood. The shocker reveal comes when we find out Raven’s soul-self is leading the charge against the team—can Raven ever be whole again?!

Part three of “Into the Bleed” story arc. Mother Blood has split the Titans apart to gain access to the multiverse using “the bleed.” Green Lantern and Steel are captured. Raven has been fractured into three beings, Miss Martian is severely injured, and Beast Boy has been taken over by the Blood Cult. Donna Troy is the only fully functioning Titan around to hold off the Unearth army.

Congratulations, you have just read the best part of Titans #35.

Titans is not a bad book, it is just a book that meanders. Meandering can be fine unless it is consistently meandering. At that point, it is just one in a hundred bland books that take up space. That is disappointing. Not only is this arc is supposed to be the culmination of the last year, but there is fantastic potential here.

First and foremost, Prince Travesty. He and his world, Unearth, were introduced in the second Titans arc He jumped over to the real world by stealing Raven’s soul self. Instead of running amok over there and have the Titans deal with the kidnapping of their teammate, he only appears again once we are back on Unearth. The last issue it appeared he killed his creator, but it was all a distraction so he could double-cross Mother Blood and free the Titans.

Next is Donna Troy, the leader of the Titans. She has been reluctant about leadership, only recently accepting that as her responsibility. Due to the events of this arc, she is the only Titan functioning near 100%. That seems like the type of plot point that is built up to have a payoff. Unfortunately, the moment is completely wasted by Raven effortlessly coming back together and dispatching the enemy forces.

Given the contemporary nature of her origin story, a member of the Latinx community almost taken advantage of due to the border situation, it is a shame that she devolved into a monologuing, throwback villain. She is just a big bag of blah in a red cloak.

The Titans are close to reuniting, so, mercifully, this story is almost over. It would be nice if there was a surprise, or if one of the new characters does something interesting in the next installment, but there is no reason to expect any different. Just more wasted potential from a by the numbers story. – E. Chad Metz