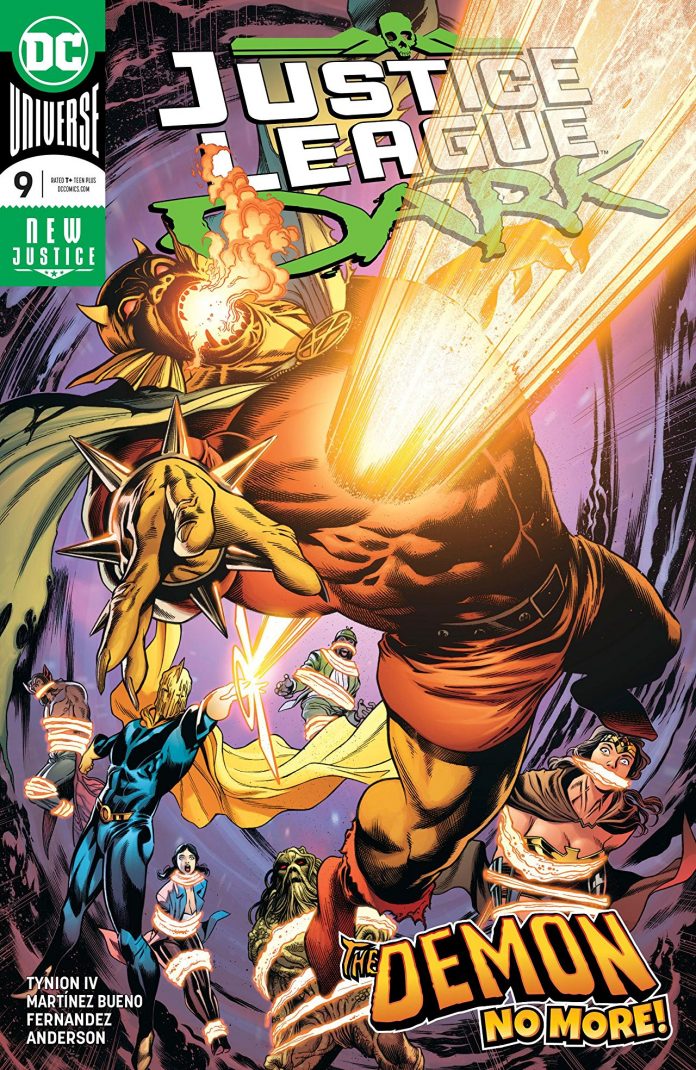 SYNOPSIS: Doctor Fate has assembled his Lords of Order, and it means certain destruction for the Justice League Dark! As Doctor Fate traps the magical community on Earth, the team fights against the Otherkind. The walls are closing in on them, and they’ll need to find a way to stop Fate if there’s any hope for magic’s survival!

It’s the end of the world… again.

Bobo must save Myrra from a hostile invasion… again.

Wonder Woman and Zatanna must travel to Aeaea in search of Circe’s help… again.

This sounds all too familiar.

Perhaps that’s because these events have already happened, and we’re only nine issues deep in James Tynion IV’s run of Justice League Dark.  Bobo already fended off an attack on Myrra in issues four and five, and Wonder Woman and Zatanna sought Circe’s help in the “Witching Hour” storyline.

Not only is Tynion’s JLD storyline crushingly soulless, but he’s also actually starting to repeat himself.  And it doesn’t have that trippy “hey, I think we’ve been here before” type of feeling that an author who actually knew where the story was going might be able to pull off; Tynion is repackaging the same rote storylines and trying to sell it as something new.

It’s the end of the world… again.  And because it’s the end of the world again, Tynion has taken any genuine feeling of risk and thrown it right out the window.  He can’t keep proposing a cataclysmic end of the world scenario every three issues and expect the reader to have an authentic sense of impending disaster.  It’s Chicken Little to the nth degree – if you keep telling me the sky is falling, I’m going to stop believing you.   Here we are, nine issues in (sorry to keep harping on this), and Tynion continues heralding the end of existence without taking any time to have strong character-building moments that are required for us to care about what is happening.

This issue, like most of the issues before it, is lifeless and aimless.  I don’t even know why Tynion is writing this book; it has no inspiration, no intrigue, and it is tedious to the point of exhaustion.  If it’s just a paycheck for him, I implore DC to find someone else who’s hungry to tell a proper JLD story.  Please, find a different writer with half a brain who actually cares about these characters and let’s move forward because this is really getting old.

Whenever I read this book each month, I feel like Steve Martin shacked up in a hotel room with John Candy in Planes, Trains, and Automobiles.  Tynion is a Chatty Cathy Doll; he keeps pulling his own string month after month, churning out inert yarns, and I keep telling him:

“You have to discriminate.  You choose things that are funny or mildly amusing or interesting.  You’re a MIRACLE!  Your stories have NONE of that.  They’re not even amusing ACCIDENTALLY.”

The book is bad.  And yet, in the recesses of my mind, I continually second guess my thoughts about Tynion’s JLD each time I review it.  Like the disciples gathered around the Last Supper table on the night before Christ was crucified, I’m looking at this comic and asking myself, “Is it I?”   Is there something that I am missing, something I’m not understanding, or is the comic really this bad?

I can only go with my gut, and my gut says it’s time to take this one behind the barn and shoot it.

I look forward to the day when I can recommend you swing by the comic book store to pick up this title.  It won’t be this month, unfortunately.  And it likely won’t be until Tynion moves on to something else. – John Funderburg