Via a press release sent to BOF from DC Comics, new details, and a few panels, from BATMAN: THREE JOKERS are below.  Check it! – Bill “Jett” Ramey 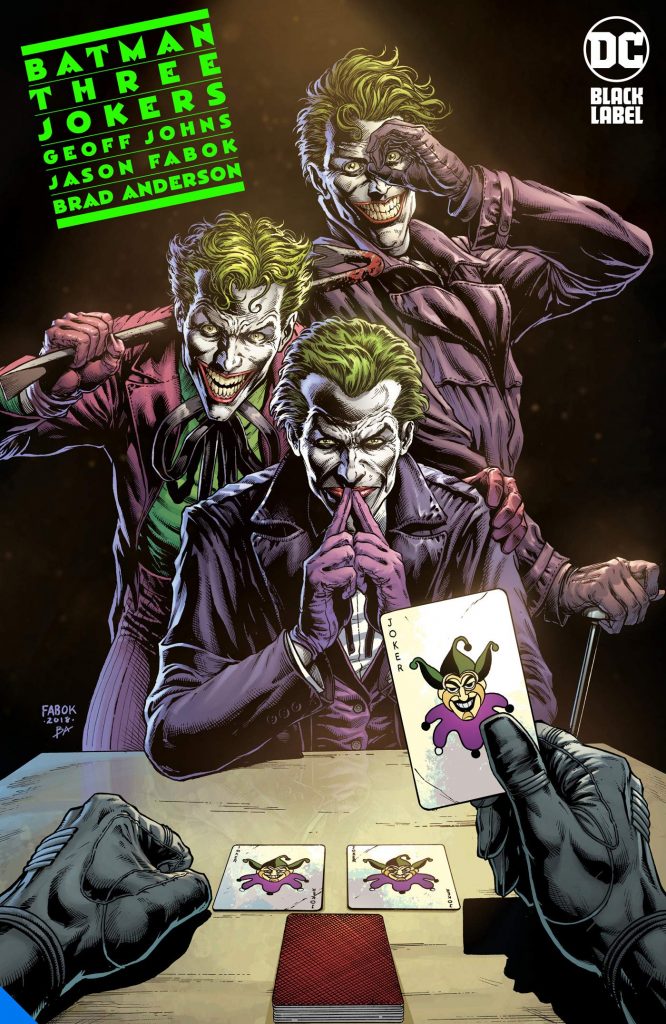 BATMAN: THREE JOKERS continues to be one of the most hotly anticipated series in comics. If this new artwork by Jason Fabok and Brad Anderson is any indication, that anticipation is well justified.

Now Scheduled to launch Tuesday, August 25, this three-issue monthly limited series spotlights Batman, Batgirl, and Red Hood, joining forces to solve a mystery unlike anything they’ve ever faced before, while dealing with the deep, lasting scars they have all suffered at the hands of The Joker.

“It goes back to the beginning when Batman first encountered the Joker, but it’s also The Killing Joke and A Death in the Family that speak to the book and that we’re building off emotionally,” Johns said in an EW.com interview. “Barbara and Jason have gone through so much, as has Bruce, and it’s really focused on healing, on scars and wounds and what that does to somebody. If you suffer some trauma, you don’t just get over with it and move on with your life, it changes who you are. Sometimes it changes you for the better, sometimes it changes you for the worse. You can heal right, and you can heal wrong. That’s really what the book’s about: Healing right, healing wrong, and surviving.”

THE THREE JOKERS Preview
1 of 4

Eisner award-winning artist Fabok and colorist Brad Anderson are at their absolute best as they team up with Johns to deliver their first-ever Batman/Joker story together, a powerful and emotional story that’s destined to be an instant classic.

“As more stores are finding ways to operate and service their customers, our release schedule is under constant review,” said SVP and Editor-In-Chief Bob Harras. “From placing orders to on sale, moving Batman: Three Jokers to August will enable more stores to order and sell this incredible story that Geoff and Jason have crafted.”

Yes, AQUAMAN is a Success, But it Doesn’t Validate the BvS-verse