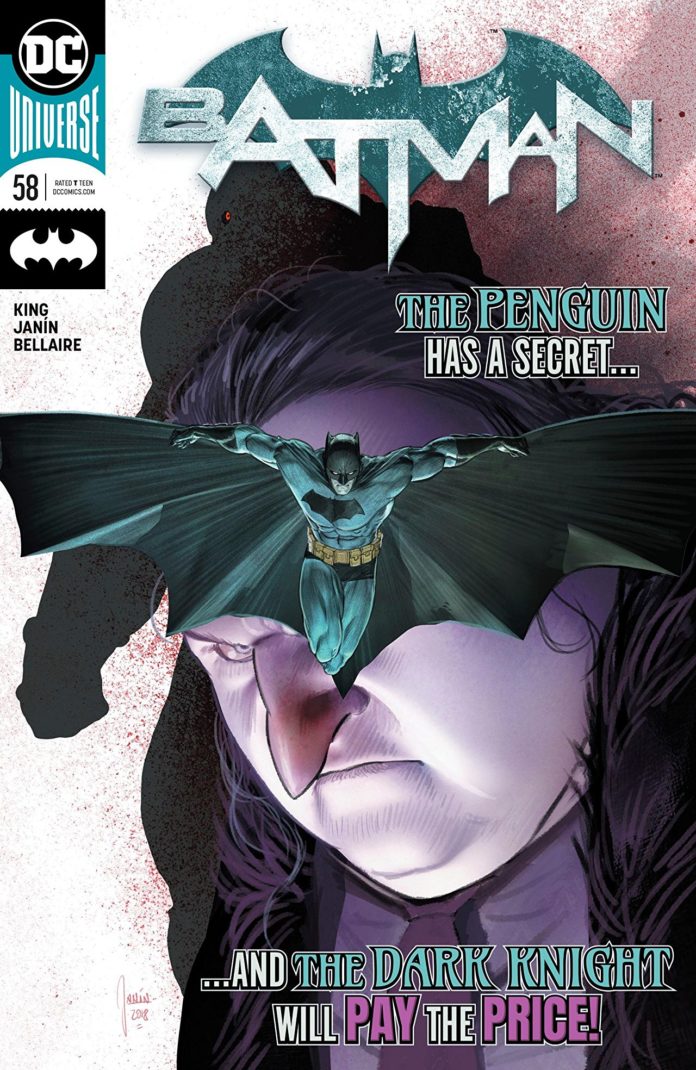 SYNOPSIS: The Dark Knight waddles into a turf war with The Penguin! Still reeling from the attacks on his Bat-Family and reputation, The Caped Crusader looks to track down the mysterious operator lurking behind the scenes in Gotham City. As the hunt rages on, Batman runs “a fowl” of Oswald Cobblepot. But The Penguin is on Batman’s side for once, and the crime boss sees dangerous things on the horizon. How can he convince The Caped Crusader he’s on the level?

The Bird meets The Bard as “The Tyrant Wing” begins.

But will Alfred Pennyworth meet Penny Cobblepot in the afterlife?

Oswald Cobblepot slings Shakespeare as he waddles in the wake of a devastating loss, Batman digs more deeply into the mystery of who’s dismantling his family and life, and perhaps these old adversaries will discover they have more in common than identities inspired by things with wings.

After his goon squad discovers his young bride dead on the Iceberg Lounge’s doorstep, Oswald knows it’s finally time to answer Bane’s invitation to his clandestine kingdom in the bowels of Arkham Asylum.

And how does he get there? By confronting The Batman, who later follows up with Gordon on leads related to the icy murders Bruce Wayne’s recent jury duty cleared Mr. Freeze of in “Cold Days” (in issues 51-53).

Bane springs Oswald from Arkham and tasks him with a mission that makes KGBeast’s shooting of Dick Grayson sound like an errand to pick up some dry cleaning; Batman’s curiosity about Cobblepot’s fishy freedom results in fisticuffs that give the Penguin’s assassins the time they need to obey Bane’s will. But the monocled miscreant has other ideas, and he clearly sees a role for The Batman in his plan.

Shakespeare’s poem “The Phoenix and the Turtle” serves as the story’s narrative and allegorical backbone, and the details in writer King’s words make the rest of it sing. Where Cobblepot wants Penny buried, and why. The bittersweet sincerity of his graveside eulogy for her, and how it makes us feel for her without our ever having known her.

I was frustrated by Batman’s inability to discuss Dick’s condition with Gordon, who asks not out of nosiness but legitimate concern, and I welcome the return of Alfred’s dry and deadly wit which King has commanded so capably since the beginning of his run.

Artist Mikel Janín has served alongside King in trenches of Gotham City (and beyond) for some of the biggest storylines we’ve seen in these pages, including “I Am Suicide,” “The War of Jokes and Riddles,” “Everyone Loves Ivy,” “The Best Man,” and the non-wedding “wedding” in issue #50.

Janín’s Penguin is misshapen but formidable, especially with the bald head he gets because of a lice outbreak at Arkham. (The bald head also speaks to renewal in the aftermath of the loss of his love. Janín makes it especially effective.) His action is as fluid and as easy to follow as always, and one really cool panel in The Batcave will take your breath away. Much of that panel’s power comes from the colors by Jordie Bellaire, who’s consistently been one of this book’s best assets.

I love how the cave’s secrets disappear into the infinite amber glow of technology that blooms below the gray-green hues of the cave’s natural structure. Bellaire is, as always, all the way on point. (The Penguin’s black monocle is a wicked compliment to his shiny bald head.)

Things are really getting interesting! Batman implies he knows more than we know he knows, and a Penguin with nothing left to lose could prove an unlikely ally against Bane’s vast and vile conspiracy to break The Bat yet again.

Good luck with that, Bane. You’re going to need it. – John Bierly