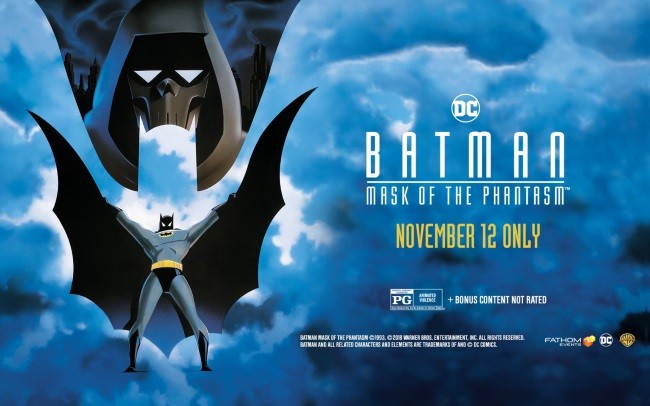 Lest we forget, FATHOM EVENTS is sponsoring a special, one day only screening of BATMAN: MASK OF THE PHANTASM on Monday, November 12, 2018.

CLICK HERE to see if a theater near you will be screening this film and to buy tickets.  I’m going, are you?

Since its first appearance in 1993, “Batman: Mask of the Phantasm” has become a favorite of fans and critics alike. “Batman: Mask of the Phantasm” will thrill fans 25 years after its initial release with its tale of the Dark Knight and his mission to clear his own name after vicious mob bosses are found murdered – with all fingers pointing toward Batman as the criminal.

Told in a bold, memorable animated style, “Batman: Mask of the Phantasm” stars the voices of Kevin Conroy as Batman, Stacy Keach as Phantasm, Efrem Zimbalist Jr. as Alfred, Dana Delaney as Andrea Beaumont, and Mark Hamill as The Joker.

“Batman: Mask of the Phantasm” – directed by Eric Radomski and Bruce W. Timm from a screenplay by Alan Burnett, Paul Dini, Martin Pasko, and Michael Reaves – will be presented with the hilarious 2010 Looney Tunes animated short “Rabid Rider,” starring Wile E. Coyote and the Road Runner.