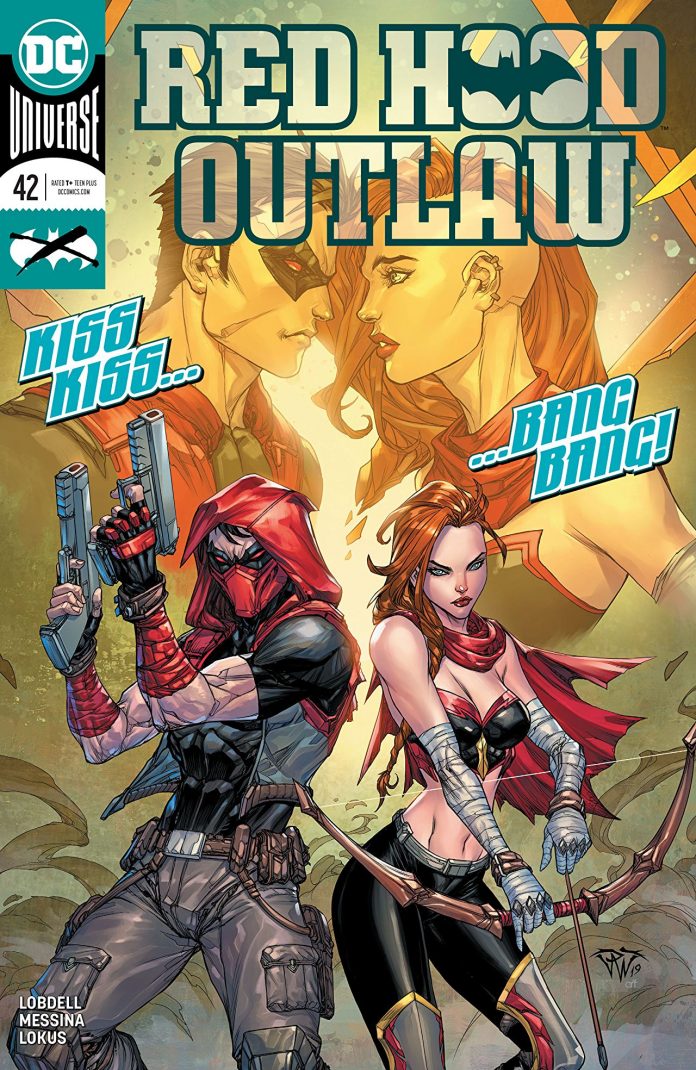 SYNOPSIS: No one was harmed in the making of this issue! Red Hood is thrilled Artemis and Bizarro are back…but so much has changed for the Outlaws. For the moment they’re mentors to the next generation of super-villains, and if you don’t think the kids are going to challenge their new teacher, Bizarro…then you don’t know Generation Outlaw! Plus, Jason and Artemis finally follow up on that kiss (you know the one!)…but their feelings surprise them both! In the meantime, an unspeakable darkness reveals itself…did the Outlaws finally come together just in time to watch helplessly as the world ends around them?

Well, here we are at the end of the “Generation Outlaw” arc and this issue serves as its epilogue and also a prologue for what’s to come, so much so that it’s actually the title. Because of this, don’t expect a lot of action as Lobdell focuses on character beats, something he’s excelled at in this series.

We see Doomed learning meditation from Bizarro, Ma Gunn coming clean to Jason, something going on with Suzie Su, but most of the spotlight focuses on Jason and Artemis as they stumble their way on where things should go next.

Jason’s never been much of one for tact, so it should come as no surprise how he factually mentions Roy’s death in Heroes in Crisis to an Artemis who’s missed out on all that. It initially feels like Lobdell is glossing over her feelings on the matter as she asks how Jason got his revenge. Instead, it becomes something much sweeter as these two people who have had trouble expressing vulnerability simply hold each other for a page worth of panels until they find some peace and release for their mutual sorrow. It may feel a little Good Will Hunting, but it makes sense for these two.

Their conversation moves on to Artemis’ troubles, namely the breaking of her bond to “Mistress” her six-foot battle-ax. It’s actually something very sacred to her, which says something about how few the relationships she has with actual people, underlying how meaningful her relationships with Jason and Bizarro are. Jason’s reassurance that the three of them will find Mistress together is a great way to emphasize not only their bond, but that their trio is reunited, hopefully for a long time to come.

The real crux then becomes the “will they/won’t they” aspect of their relationship and how they move forward from their kiss way back when. This of course means they need to try again and see if they feel anything. Lobdell has put himself into a trope trap here. Do they become “an item” and cut out the romantic tension, something that has doomed other narratives, or deny their true feelings and drag it out? I’ll let you read the issue and discover for yourself which path Lobdell takes.

Art-wise, Pantalena picks up the pencils here, despite the cover proclaiming it’s done by Messina. He brings a visual consistency to the title, aping the style of Rocafort, but still having a modicum of his own voice. On my first read-through I found the art derivative but appreciated it a lot more on the second go-round. Faces are highly stylized, but Artemis’ pain still comes through when she confides in Jason about her recent struggles.

While I appreciated all the focus on Artemis and Jason, I still feel like the title has glossed over the mechanics behind the return of Artemis, Bizarro, and Ma Gunn, as if it doesn’t matter. Imagine a Return of The Jedi where the movie went straight from the ending of The Empire Strikes Back to Han, Luke, & Leia already reunited and going on their mission to Endor simply because we like seeing this trio together with no care as to how we resolved their prior dilemma. Their struggle to return isn’t important apparently because the story simply wanted to focus on this new “evil” group of kids and it leaves me feeling unsatisfied with the ongoing narrative, taking this book down a notch or two.

I’m happy to have Artemis and Bizarro back, but their return feels undermined by the lack of “how”. Jason’s role of teacher takes a sideline this issue and I’m unclear what his true intentions are with these kids who don’t seem evil so much as just rebellious and attitudinal at best. Half of them are endearing so now that the cast has expanded it’ll be interesting to see how this title finds balance. It feels like several plots are brewing and none are getting the full attention they deserve. We’ll have to see what the next arc brings, but for now, my discontentment remains. – Javier E. Trujillo