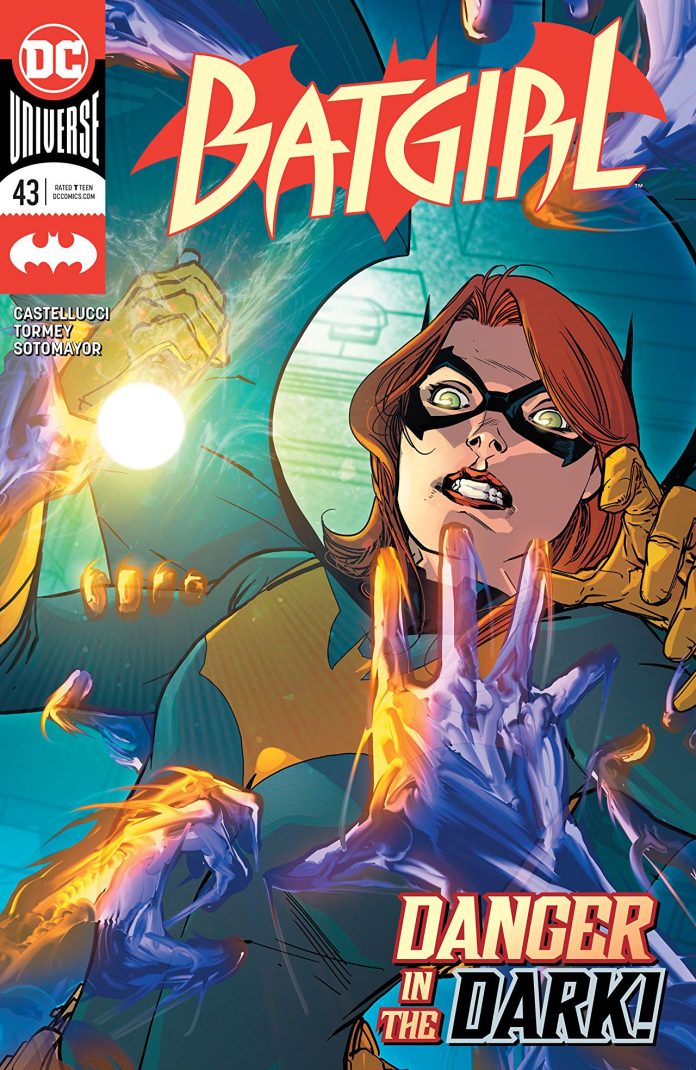 This issue picks up in medias res, which had me wondering at first if I had somehow missed the issue that preceded it. Page 1 shows Batgirl dropping in to assist an old woman who is being menaced by a pair of hulking beasts that bring to mind the demon dogs from Ghostbusters as well as the Seven Deadly Sins from last year’s Shazam! There’s also a mysterious duo observing the scene through some sort of magical portal. The monsters prove to be less of a threat than their appearances suggest, and Batgirl is able to fight them off with relative ease. As both the monsters and the old woman vanished from the scene, Batgirl is left with only a wallet and a library book as clues to what just happened.

As the story continues, we’re introduced to a George R.R. Martin-esque fantasy author who lives in the magical world of his creation, haunted by a lost love from the real world and unable to create a satisfactory facsimile in his fictional one. Batgirl also briefly gets pulled into this magical world with a sort-of dream sequence featuring Dick Grayson and Jason Bard fighting each other for her honor.

New artist Cian Tormey and colorist Chris Sotomayor keep the visuals simple, clean and bright while using dynamic angles and stark lighting for a dramatic effect where appropriate. The story winds up with elements of the fantasy world becoming realized in Gotham, as Batgirl and Jason Bard face down a living, breathing dragon.

So… this is a pretty weird turn into full-on fantasy; a sharp departure from the relatively grounded stories of recent Batgirl comics, despite coming from the same writer (Cecil Castellucci) as the previous story arc. It feels sort of like a Superman comic from the ’50s, with Batgirl getting swept up in someone else’s outlandish adventure. However, with the way it ramps up the romance and fantasy, I can see this as an attempt to pivot the storytelling to something aimed more at a young female audience, rather than just telling the same kind of action/crime stories you might find in Nightwing or Detective Comics.

So far, I don’t know if it’s really working for me, but I appreciate that they’re trying something different. – Rob Veatch III