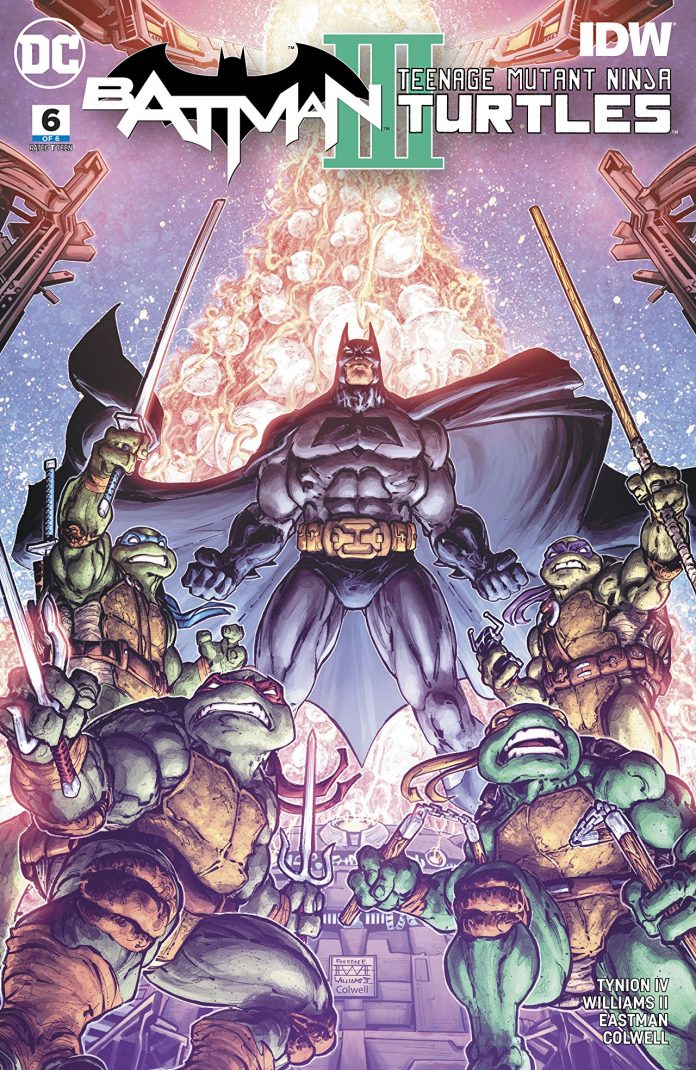 SYNOPSIS: Krang has steered his Ultra-technodrome into the skies above the new Earth he sought to conquer and rebuild in his own image. He thought the heroes of the worlds he’d conquered were down for the count, but now he faces two sets of Teenage Mutant Ninja Turtles, two Batmen and a whole host of angry heroes looking to save their worlds once and for all. If Krang can’t own the Multiverse, then he will destroy it!

So ends another Batman and Ninja Turtles crossover. And so begins my countdown until the next.

This week’s issue #6 continues the comic book madness we’ve seen in every issue thus far. There’s multiverse, multiturtles, multifights, and just multi-everything. I honestly just stopped reading a few times to absorb everything going on in the panels. It’s comic book insanity, cranked to an 11.

James Tynion has been weaving a heck of a story this time around. He’s blended characters from Batman’s world with the TMNT universe, creating a head-scratching debut issue that quickly explained itself. Month-after-month, we were anticipating everything coming to a head, and it sure did here. I appreciate the way Tynion told this story. Something really complex and original, yet he took his time and let everything breathe. In the end, nothing was left unresolved or confusing.

Artist Freddie Williams continues to be a madman for this series. It really feels like Tynion just let him off the leash and said “have a good time”. His turtles have never looked better. His Batmen have never looked better. His action-filled multiverse battle is oozing with fun. I had a blast analyzing every panel in this issue especially, and you should take some extra time to look it over.

The latest crossover series has ended on such a high note, I can’t be sad it’s over. Way back when I first learned how the series was kicking off, I was a little hesitant. But after that first issue, my concerns quickly disappeared. This was a blast of a comic book series that every fan should pick up. And then you can join me in counting down for one more. – Ryan Lower