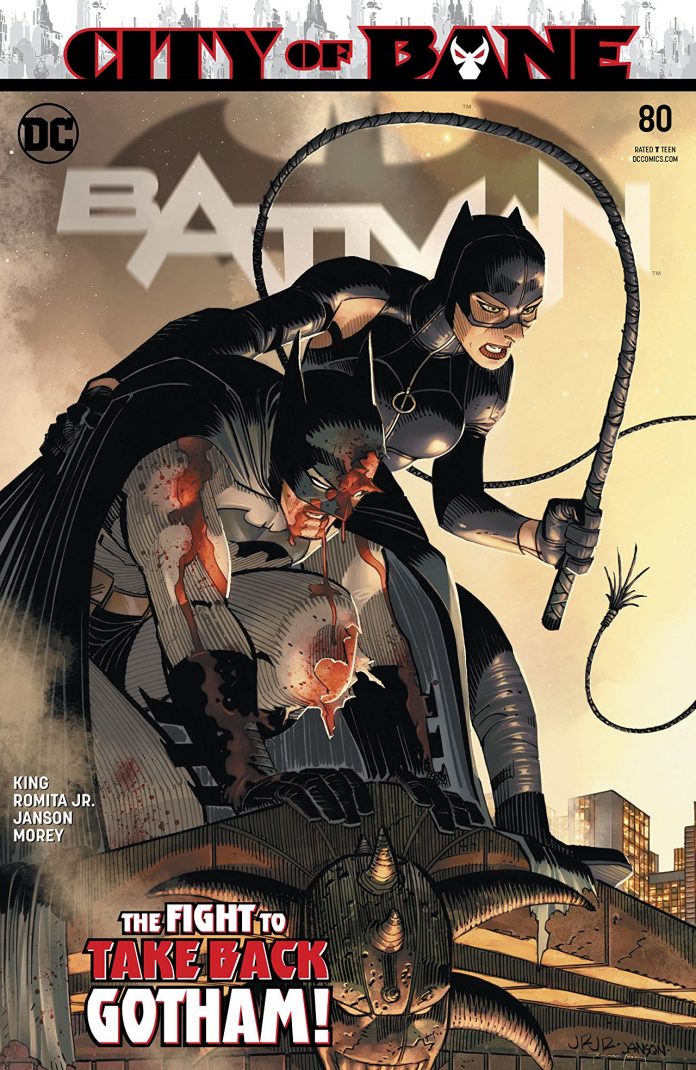 SYNOPSIS: The bad guys thought they had it made with Bane in control, but with Batman back in Gotham they’ll be reminded what justice feels like…and how it hurts when it hits you in the face. With Catwoman at his side, the Caped Crusader is looking to take down Bane’s army and reclaim his city. But what happens when old allies like Gotham Girl also stand in his way? The legendary art team of John Romita Jr. and Klaus Janson join BATMAN for two action-packed issues that will rock Gotham City to its foundation.

“Wow,” I thought, when I saw the awesome cover for BATMAN #80. “This looks like it was drawn by John Romita, Jr.”

Because it was! Romita’s artwork is the star here, and it’s fun to see the living legend tackling Batman again. The rest of the book’s fun factor will depend on how frazzled you are by the glacial pacing of Tom King’s run these days. I’ve been one of King’s biggest supporters and defenders. But when I hear from readers who say they’re losing their patience, it’s getting harder and harder to argue, and this issue won’t make those folks any happier.

On page one, deputized delinquents Professor Pyg and Two-Face harass a curfew-taunting, trench-coated man who just happens to be wearing Matches Malone’s mustache. (While I’m at it, would Two-Face really be a beat cop for Bane? I can see how Bane would want to put the legal/illegal eagle in his place, but would Harvey go along with it so easily? Regardless, Romita joins the ranks of other recent artists who’ve apparently collectively decided that the role of Harvey Dent is now being played in the comics by Tom Cruise. I dig it.) “Do you know whose city this is?” Dent demands. You can probably guess what the mustachioed man’s answer is; Romita revitalizes a scene we’ve seen a thousand times with original imagery and exciting energy.

As Bat and Cat reveal themselves in variously painful ways to Bane’s police force, the Devil of Santa Prisca himself continues to remain in the shadows. Gotham Girl is dying fast from using her powers to search for Bat and Cat; Bane doesn’t care, but Thomas Wayne does. And that’s going to get interesting, I think.

But it doesn’t get interesting in this issue, which still doesn’t acknowledge that seemingly terrible thing Bane did at the end of issue #77. And the longer we go without acknowledging it, the more I become convinced of what I’ve thought all along, which is that Damian’s punishment was just one of any of the various illusions or hallucinogens or shape-shifters on Bane’s payroll. (Well, I don’t think Bane’s actually paying anyone. “Do what I say and maybe I won’t crack your back in half” is probably the currency among Gotham City’s not-finest these days.) Bruce is aware of Damian’s likely fate, but he doesn’t even mention the other party involved in Damian’s big lesson, which means he’s either going to be surprised by or it already knows it never even happened. I’m betting on the latter, but these days one never knows.

This is yet another installment that I think will read better in a collected edition than as a single issue. I thought Batman would come out swinging after “Knightmares,” and I admire King’s guts for giving us anything but that, but has he heaped on too much misery? I’m not even sure I get the depth of Bruce’s pain. Everyone spouts about how he’s irrevocably broken (including another classic Rogue in these very pages), but I’ve never really felt it. He was sad, he got smacked around, he slept on a couch for way too many days, had some healing (including the Marvin Gaye kind) in Hawaii, and now he’s back in Gotham knocking down fools like a boss. Again, I’m glad King took us down an unexpected path. And I still like it. But I also see where those of you scratching your heads and tapping your feet are coming from. “City of Bane” came out of the gate like a thousand Kentucky derbies before getting all deliberate again.

Romita’s name on the cover was a big surprise for me, and it’s a gift that keeps on giving on the inside. Klaus Janson (yes, that Klaus Janson) does the inks, with colors by Tomeu Morey, whose capable contributions to recent issues have been incredible and utterly indispensable, just as they are here. So many hues. We all know what these guys can do. They do it.

As Batman said several issues ago when I thought he’d finally scored a win but was made a fool of by Tom King yet again, “I’m still here.” I know some of you are not, and I truly believe these chapters will read better in a collected edition. Instantly classic moments abound, but collectively they lack narrative energy. I’ll still give it an “A,” because again, “I’m still here,” but if you’re on the fence or have already fallen off of it, maybe wait for the trade. – John Bierly