The Dark Knight has been around for a decade. In honor of my favorite movie of all time, I wanted to celebrate the big anniversary on July 18 by putting together a “best of” list. Now, limiting anything from The Dark Knight to just 10 is nearly impossible. The film has many outstanding lines, moments and images, how could I create a “Top 10” list? I asked myself: “What moments in the film had the biggest impact on me upon my first viewing, and still to this day?” Not my favorite, or coolest, but the most impactful.

After a lot of debating, and shifting my order, I have created a list that will only satisfy me until tomorrow. I believe the following 10 (and 1 honorable mention) impacted me the most upon viewing The Dark Knight.

What’s happening: What was “all part of the plan” didn’t go as-planned, as the citizens of Gotham had faith and didn’t blow each other up. There were no fireworks. The Joker falls from a tall building, and Batman catches him with the grappling gun, pulling him up by his leg.

Why the impact: This is another brilliant face-to-face discussion between the adversaries. While it may not be the most visual, it struck me in my chest as soon as the Joker said “I think you and I are destined to do this forever”. Obviously, I knew this was the end and they wouldn’t meet again. The moment was bittersweet and still gives me the feels to this day. 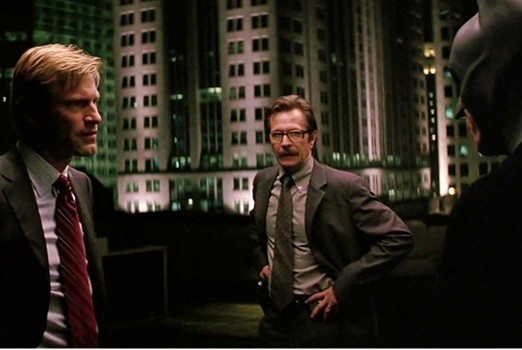 What’s happening: Harvey Dent has lit the Batsignal, assembling a meeting on the roof of the GCPD between him, Batman and Gordon to discuss how to take down the mob.

Why the impact: This is purely for nerd reasons. Ever since reading The Long Halloween, I have longed for a live-action shot featuring these three allies coming together. Christopher Nolan gave us this shot, and it was worth the wait.

What’s happening: In a race to get Harvey Dent, the Joker and his goons are in a violent and speedy race through the streets of Gotham. Enter the Batman (on his new ride the Batpod), who races toward the semi, only to “miss”…but actually twisting cables around the rig, flipping it end-over-end.

Why the impact: This shot just oozes summer blockbuster. Though many of us had already seen it in the trailer, actually watching the huge rig flip (practically) was a huge rush of “hell yeah!” in theaters. It’s still the most visually impressive shot in the movie (for me).

8) The Joker at Loeb’s Funeral

What’s happening: As the mayor is giving a speech at Commissioner Loeb’s memorial service, the Joker and his goons have hi-jacked some GCPD uniforms and turn their guns toward the mayor.

Why the impact: The buildup to this payoff is awesome. We start to sense that something isn’t right when Bruce walks into an empty apartment where Gotham officers are tied up. Not only that, but Hans Zimmer’s Joker theme is also building up, creating unsettling tension that we as the audience know isn’t going to end well. Though I had stumbled across this screenshot before the movie was released (purely accidental), this still made a great impression on me in the context of the story. Pure Joker, pure badass. 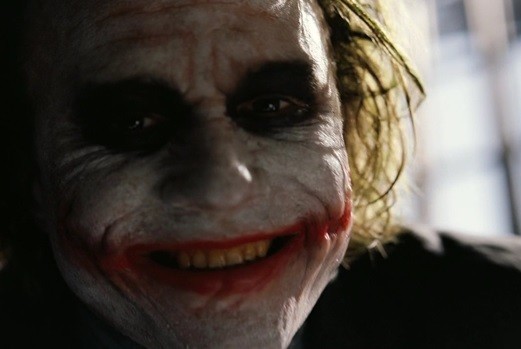 What’s happening: An organized bank robbery at a Gotham bank. As the goons start taking each other out, one of the worker’s at the bank pulls a gun and starts to fire back. He gets shot, and one of these goons approaches him and removes his mask.

Why the impact: This was the reveal of this world’s Joker. While many of us Batfans knew it was Heath all along (thanks to the prologue being released 8 months earlier), I can only imagine how some of the general audience reacted to this moment, unaware who was really behind the mask. Heath looked GREAT here: menacing, horrifying, and engaging. A perfect way to start this movie. 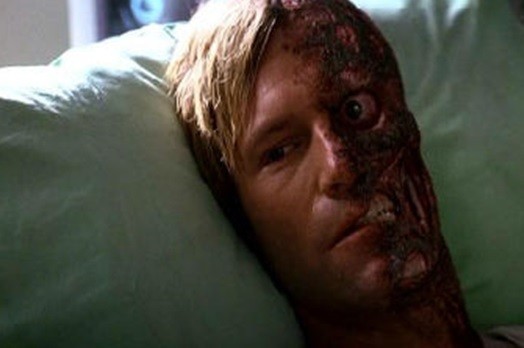 What’s happening: As Harvey is recovering from his warehouse blast, Gordon is questioning him to find out which of his crew were the traitors. After making Gordon reveal an old nickname (Harvey Two-Face), Dent turns to Gordon to give us a glimpse of the irreparable emotional, and physical, damage done.

Why the impact: It’s our first look at Two-Face, and it’s unsettling. Accurate, but disturbing. Fortunately, I didn’t come across any spoilers on how this would look, so this was a gut punch upon my first viewing. This is also the first moment where we can believe Gotham’s White Knight is gone.

So there you have it, numbers 10 through 6 (including the honorable mention) of my 10 most impactful shots from The Dark Knight. CLICK HERE for Part 2 where I reveal my Top 5! – Ryan Lower