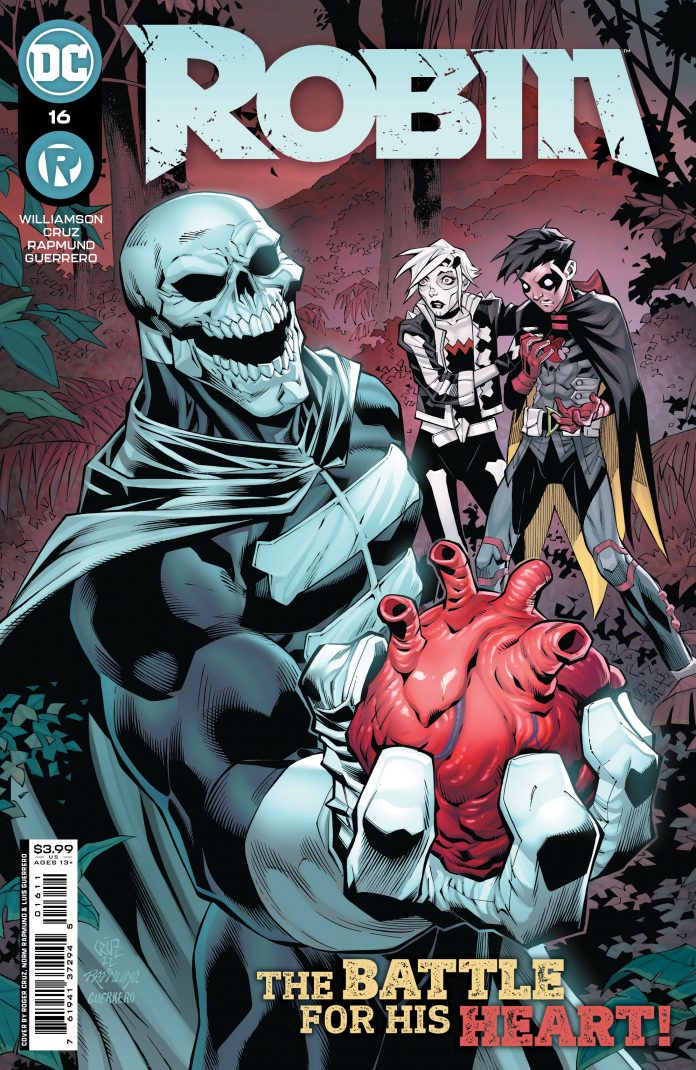 SYNOPSIS: Robin’s investigation into Lazarus Island is put on hold as Lord Death Man strikes. Damian and Hawke are called to Tokyo by Flatline to help her deal with her crazed mentor. Which means…killer-bros road trip!

The latest issue of Robin opens strong with an accusatory string of panels condemning Damian, but as it’s from his point of view, the reader is the one feeling all the guilt. As Respawn deteriorates before our eyes, I know that this kind of storytelling would have made me squirm at five years old. Thankfully, adult me can handle it and I found it a very effective way to draw the audience in!

Lord Death Man’s wails can be heard all across the island, waking Damian from his fitful slumber and prompting a very unconventional interrogation scene. It really feels like Williamson is having fun here. Damian and Connor are wise to Lord Death Man’s tricks and easily smell a trap. It’s not even in question. We know it, they know it, and Williamson pushes the narrative onward, shifting focus to what the island is quickly becoming now that Robin and Hawke are in charge of things.

Damian has really been through a lot of change since the death of Alfred and his growth is evident as he welcomes more people to his new refuge. He and Connor don’t even seem to be at odds anymore, giving him another friend to relate to besides Jon, who is currently busy being Superman.

One of my favorite bits in the book is when our heroes arrive in Tokyo to figure out what is going on with Flatline and why she has allegedly terrified Lord Death Man so. They encounter Hiro, the Batman of Japan, and once again, Williamson does away with any contrived notions of what typically happens next. What really made it stand out for me was Hiro’s status as a member of Batman, Inc., which Damian refers to as Ghost Maker, Inc., even going so far as to call him a pretender and voicing his disdain at his father’s choice to lead that team. Buddy, you’re not the only one who’s not liking that choice.

Williamson again subverts expectations as the trio investigates one of Lord Death Man’s hideouts. This leads to some humorous reveals and a conclusion that I most definitely did not see coming!

I really love Roger Cruz’s pencils in this issue. Aided by the inks of Norm Rapmund, images leap off the page! Sequential storytelling is also top-notch. While I can’t say the layouts break any new ground, the imagery is strong, with bold characters and strong angles depicting the action. Luis Guerrera’s colors perfectly compliment the art, with Tokyo being a standout. Make sure you spot the Godzilla cameo!

Williamson once again crafts a well-told tale. There isn’t as much angst this time around and there didn’t need to be. Sometimes, comics just need to be fun, and this certainly was. It could’ve been very hackneyed, but Williamson knows the tropes and how to get around falling into certain traps. Everyone is firing on all cylinders this month and it shows! – Javier E. Trujillo

Review – RED HOOD AND THE OUTLAWS #25 by Justin Lee