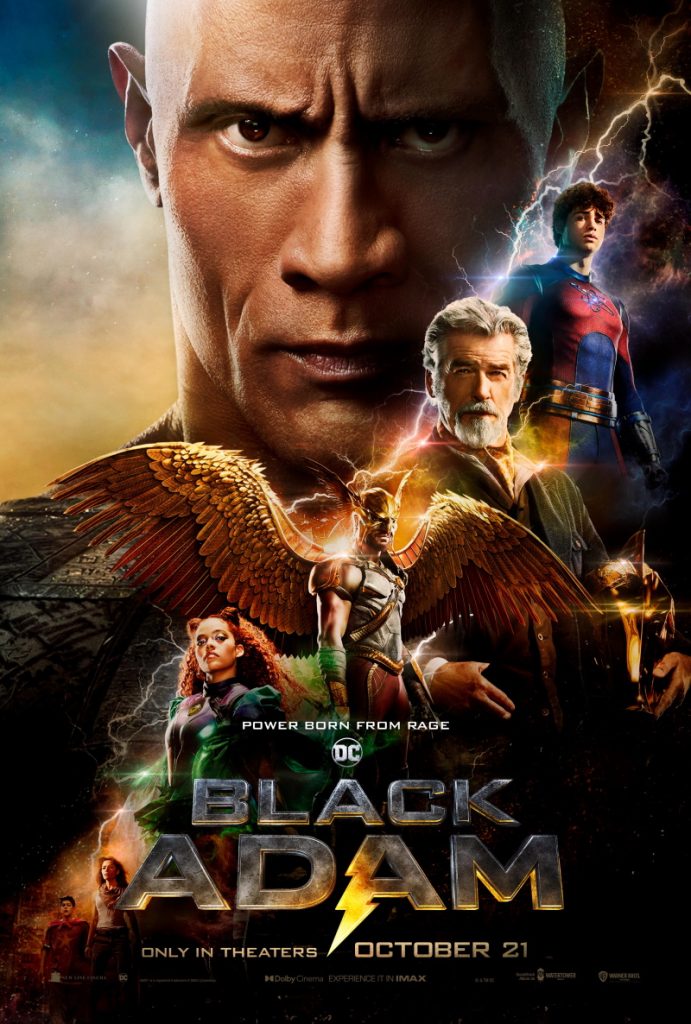 So, by the time Black Adam screened here last Tuesday, it had already premiered and reviews were up. I never read reviews before I see a film, but headlines are hard to ignore. I went in knowing that reactions were definitely mixed, mainly leaning toward the negative, but I have a somewhat gentler point of view. While it’s true that director Jaume Collet-Sera has given us a mishmash of plot lines and character interpretations, he’s also given us something audiences, who aren’t critics, like…

There are a few too many stories going on here. There’s the narrative of how Black Adam came into being which is necessary. There’re the conflicts within the self-proclaimed Justice Society, which could have been much more limited. Then, also necessary, there are the differing attitudes between The Justice Society and the archaeologist who awakened Black Adam after 5,000 years. Again, this could have been done in far less screen time. Exposition can be overdone leaving the audience wanting to just get on with it already.

Dwayne Johnson, the popular scenery-chewer, dominates the screen with his enormous presence. Usually the good guy, he’s the first to say he’s not a hero. Of course, we don’t believe him, but watching his unexpected transformation from villain to anti-hero is great fun.

He’s supported by a strong cast, many of whom are saddled with too many silly lines. Pierce Brosnan, always reliable, plays Dr. Fate whose ability to see the future provides a bit of poignancy to the action. Fate’s best bud, Hawkman (Aldis Hodge) delivers a strong performance as the hero with a terrible temper. His fight scenes are too many and too repetitive, and despite his appeal, this slows the film’s pace.

Two young newcomers to The Justice Society bring humor and a break from the older guys’ cynicism. Quintessa Swindle is a delightful addition as Cyclone. She makes her character radiate from the screen in a way that makes us believe she could really be doing all the fantastical stuff we came to see in the first place. She and the other teenage character, Atom Smasher (Noah Centineo) play well off each other with her confidence contrasting effectively with his aw-shucks awkwardness.

The ordinary humans in the story do a wonderful job communicating their love for their country, the obviously fictional Kahndaq, and their desire for freedom from its current oppressors.  Sarah Shahi portrays archaeologist Adrianna who is able to read the ancient language on artifacts from the era of Kahndaq’s greatness 5,000 years prior. Stealing every scene he’s in is Bodhi Sabongui who plays her son Amon.  Mohamed Amer provides comic relief as her brother Karim.

The actual villain, Shabbac, played by Marwan Kenzari, is appropriately menacing and bloodthirsty as he seeks to seize the Crown of Sabbac with its unlimited powers, from Adrianna.

Seeking to control all this madness, Amanda Waller (Viola Davis), who, with the little screen she’s given, is made so unsympathetic that you can’t possibly root for her. She just doesn’t get it.

My main takeaways from Black Adam are that mythology can be overdone and that above all, people desire freedom. This may not be the best DC film you’ll see, but it’s certainly not the worst. – JoAnne Hyde