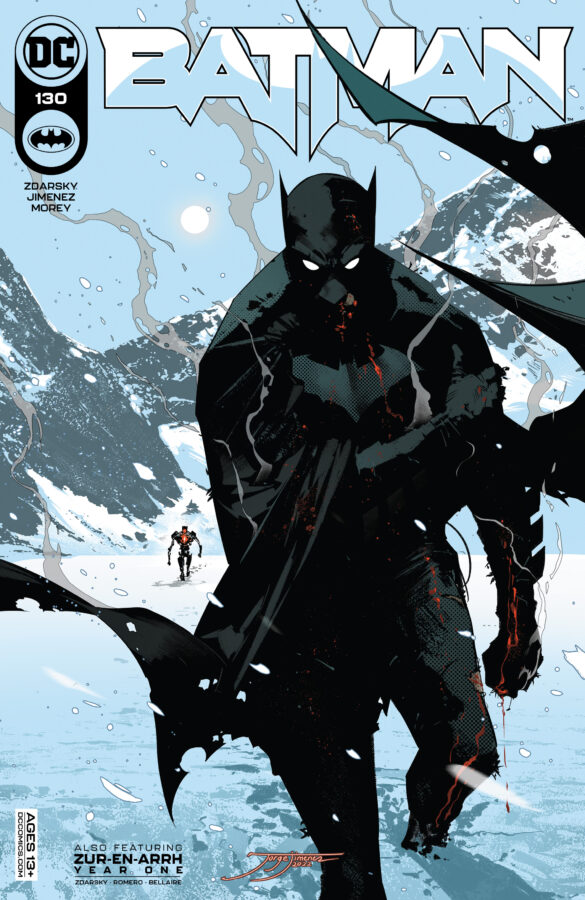 Chip Zdarsky and Jorge Jimenez’s “Failsafe” story comes to a conclusion in this week’s BATMAN #130, and in a dramatic, interesting fashion.

We left off last month on a cliffhanger, with Batman falling from the moon (true story). This issue immediately picks up there, and I have to say I was a bit hooked on the fallout. With Failsafe in hot pursuit, this arc comes full circle, as we get a Dynamic Duo team up to take down the machine. The outcome had me scratching my head and chin.

This arc hasn’t completely sold me, and at times I’ve been a little critical of how (I feel) it caves in on itself. But, Zdarsky and Jimenez have kept my attention and provided the equivalent of a big summer blockbuster. There’s tons of action without many lulls. Each issue did move and had some good fighting. The ties to a beloved Justice League story, TOWER OF BABEL, at times felt too reliant and imitative, but then would branch out and do its own thing. Was this a satisfying conclusion? It’ll totally depend on how you’ve enjoyed these six issues.

I’ve been consistently praising Jimenez’s art on this title, and there’s no change here. He delivers the goods in what should be top-notch action. Batman falling from space should be ridiculous, but the artist kept it captivating and thrilling. The settings look excellent and clear. The fighting is clear and impactful. Jimenez has done another great job here.

The backup story has been my favorite part of the BATMAN title. Zdarsky has crafted a great “Year One” for the Batman of Zur-En-Arrh, that provides insight into Batman’s backup system (which admittedly, I’m not a massive fan of). It was interesting, interpretive, and gorgeous looking with the Golden Age style of artist Leonardo Romero. For how twisted the story has gotten, mixed with such a happy era look, I was hooked on each part.

Overall, “Failsafe” may not have been my favorite Batman story, but it kept my attention. This conclusion will have ramifications in the coming months, and I’m interested to see how those play out. Add in great art and a terrific backup, I say check it out. – Ryan Lower

THE BATMAN Returns to Liverpool