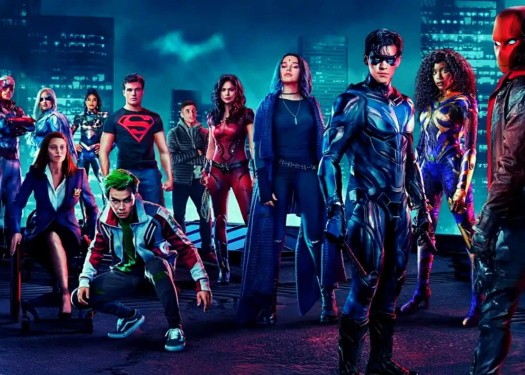 Titans season 4 has been the most bizarre season of the show to date.  “Inside Man” is another episode where the Titans are trying to keep Mother Mayhem from nabbing Sebastian Sanger in order to fulfill the prophecy.  There are some really strong character moments here, but overall, the show is lacking deeper plot development in order to set up the next character arc.

When we last left the team, Conner had been injured in the battle with the zombie Deathstroke, but the rest of the Titans are unaware and don’t recognize the danger lurking in their own house.  They must continue to protect Sebastian while at the same time trying to save one of their own from the clutches of the cult.

The problem is none of the action is aiding the overall plot.  We do get some strong character moments for Gar Logan and Tim Drake, but for the most part, it feels like everyone is just sitting and waiting for something to happen.

However, we do see some of the better acting performances of this season by Joshua Orpin and Anna Diop.  Diop has been pretty good all season, but Orpin really shines here as he weaves in and out of good and evil Superboy.  Diop once again brings the audience in with her handling of Kory’s tragic destiny, how it’s tied to Sebastian, and her devotion to being one of the strongest heroes of the team.

It feels like “Inside Man” is the proverbial “throwaway episode” that every show seems to have every season.  The potential of showing an evil Superboy is wasted by focusing on minor character details that don’t really bring the narrative forward.  Also, for a show that usually delivers on the action front, there is really none to speak of here.  But, it does conclude in a strong fashion, bringing back the paranormal elements and raising the stakes for what is sure to be an exciting ride for the rest of the season. – Eric Holzmann

The Titans are in scramble mode after surrendering Sebastian Sanger to Mother Mayhem and the Church of Blood.  While it was mostly his choice, this sets in motion a chain of events that will alter their team dynamic and put the universe in jeopardy.  The team decides to be proactive in trying to thwart Sebastian’s destiny, but things don’t go as planned, which has dire consequences for everyone involved.

Kory and Rachel return to S.T.A.R. Labs with the news about Sebastian’s decision to go with Mother Mayhem to save them.  His decision brings him to the Church of Blood, where Mayhem reminds him of his unhappy childhood and how all of those events occurred to bring him to this point.

Meanwhile, Conner is still dealing with the after-effects of his possession and starts to embrace his Lex Luthor side (he even shaves his head with his heat vision).  Dick is concerned about this, but Conner actually succeeds in his mission to prevent the Church of Blood’s ritual by disguising the blood moon.  When he realizes this is temporary, he finds out where the Church of Blood is located and decides to go and end this all himself.

Jinx has been a welcome addition to the group but to this point, she has only been used sparingly.  She gets a real chance to show her stuff in “Brother Blood”, trying to help Rachel re-discover her powers and coming up with the plan to prevent the blood ritual from happening.  She has some fantastic moments here which highlight just how important she is to the team.

It’s been an odd season, but arguably the odd thing about it has been Dick Grayson’s part in all of this.  For the first time, he is taking a back seat to the other characters, and it might not be to the show’s benefit.  He does have a nice exchange with Kory, but for the most part, he is once again just a part of the proceedings and not an actual driving force behind them.

“Brother Blood” functions as almost a mid-season finale.  It finally gives us the payoff of Sebastian’s destiny while solidifying the plot for the second half of the season.  Kory finds out she’s not as in control as she appears and Gar continues to have his dark visions of impending doom.  Rachel’s powers have returned, but Conner appears to be struggling with his duality.  The Titans must now move forward with very little idea of how to deal with this new enemy and do so as a defeated bunch.  It’s going to be an interesting final 6 episodes! – Eric Holzmann

“The New Batman” is Revealed