Previous: “I’ve Got Batman In My Basement“ 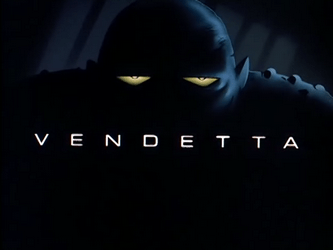 One of the best things about Batman: The Animated Series is its uncanny ability to maintain a consistent, pitch perfect tone that never betrays the core of its characters — all while applying different storytelling genres when necessary. For example, It’s Never Too Late takes its cues from noir crime drama while “On Leather Wings“ plays more like a shocking 1940s monster movie. And “Vendetta” — the series’ introduction to the villain Killer Croc — presents a tale with an even combination of the two.

The episode starts out “normal” enough — it follows the perspective of a small time hood, Spider Conway, who’s worried that someone will interfere in his prison transfer where he’s set to get an early parole for testifying against mob boss Rupert Thorne. It turns out (of course) that he’s right; the transfer goes haywire as their boat explodes, with Conway going missing in the process. What fascinates me most about this opening scene is its depiction of Batman—he’s a silent observer, watching apart from the police on the sidelines until he’s needed. It’s an approach that doesn’t get used enough in the series, but I never get tired of seeing it in other episodes like “It’s Never Too Late” or “P.O.V.”

The episode then picks up with Batman following two threads of clues by investigating both Harvey Bullock and Rupert Thorne’s suspected involvement in the incident. Batman rules out Thorne pretty quickly — but I never get tired of seeing him in the series. Thorne has been in a few episodes by this point, and it’s always a delight to hear John Vernon give a smarmy, gruff performance as the slimy recurring mob boss.

With Thorne out of the way, Batman sets his sights on investigating Bullock. In my opinion, Harvey Bullock is one of the most underrated characters in the entire series; his bullish “anti-vigilante” cop with a chip on his shoulder and a bag full of donuts always provides an entertaining foil that keeps both Batman and the rest of the GCPD in check. After some additional disappearances under Bullock’s watch, however, Batman realizes there’s more going on than he anticipated—he discovers the true culprit is a half-man, half-crocodile living in a cave in Gotham Harbor — Killer Croc!

I’ve always been a fan of Croc, although his interpretation varies wildly between forms of media. In the early comics, he was more of a 50/50 human/croc hybrid; his goal was to use his intellect to rise to the top ranks of the Gotham underworld and defeat Batman. Later comics would have him devolve into a genetically-altered crocodile monster, assuming a more animalistic body with an altered mental state. Video games and movies have taken their own approaches in recent years — it does tend to just change depending on the aim of the project. While this does make it hard to pinpoint a clear favorite or definitive version of the character, the way he’s presented in BTAS (a freak show wrestler turned to crime) does provide a good springboard for the other interpretations that followed over the years. 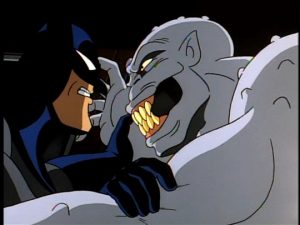 Animation wise, some interesting choices were made with the depiction of Croc; sometimes the design gets a bit muddled in certain shots, but others (like any shot with a side profile) make the character seem like a truly creepy and imposing adversary for Batman. It’s also worth paying attention to the details in the animation; having Croc run and move on his feet with an alternating hand on the ground only adds to the unsettling creepiness of the character.

After an extraordinarily animated climax in the Gotham Sewers, Batman manages to capture Croc and clear Bullock’s name — giving the two characters a better understanding of one another (at least, until the next episode). Overall, a less-than-definitive interpretation of Croc and some detective work that’s a bit too coincidental keep Vendetta from reaching my top tier of BTAS  episodes, but the character interactions and having an animated Croc at all make the episode more than worth your time. – Ryan Hoss