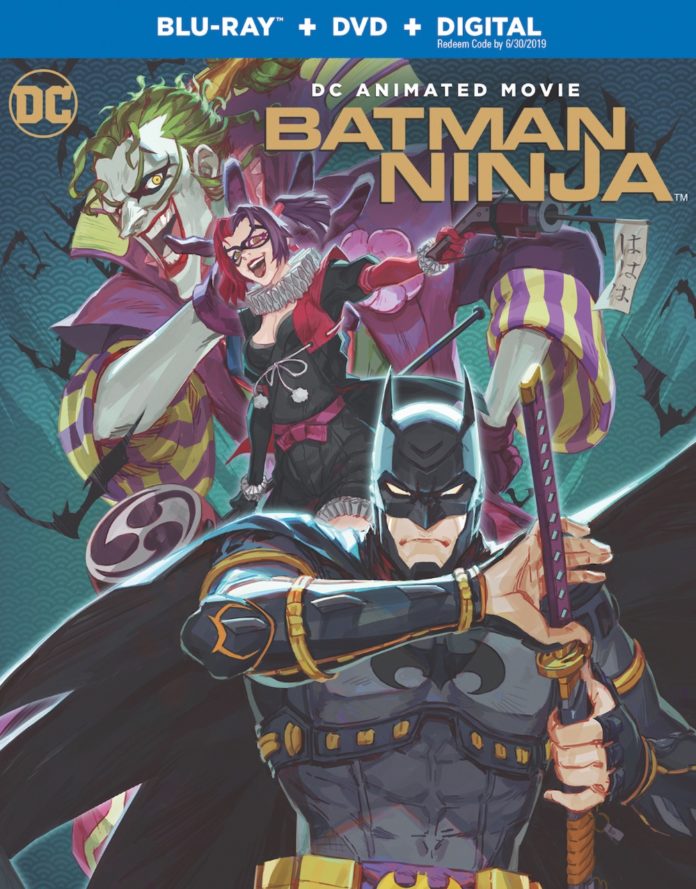 SNYOPSIS: Batman Ninja takes a journey across the ages as Gorilla Grodd’s time displacement machine transports many of Batman’s worst enemies to feudal Japan – along with the Dark Knight and a few of his allies. The villains take over the forms of the feudal lords that rule the divided land, with the Joker taking the lead among the warring factions. As his traditional high-tech weaponry is exhausted almost immediately, Batman must rely on his intellect and his allies – including Catwoman and the extended Bat-family – to restore order to the land, and return to present-day Gotham City.  CLICK HERE to purchase BATMAN NINJA on Blu-ray.

When I first heard of Batman Ninja, I dismissed the film; automatically thinking this wasn’t for me. I was never into manga and anime; I didn’t watch Dragon Ball.  I am a fan of foreign films, kung-fu movies, kaju and the Japanese Spider-Man TV series from the late 1970’s.  The closest I got to anime was Batman: Gotham Knight in 2008. I always knew there was that middle ground that I was going to find. Well I’m here to say Batman Ninja is a game changer.  Without a doubt it is the most beautiful animated Batman film I have ever watched. I have never seen anything like it. Batman Ninja is an intense story that goes full-throttle out of the gate, with a good sense of humor, while Re-imagining our favorite characters.

Do not go into this thinking it is going to be similar to Gotham Knight in terms of story. That one was so grounded as it tried to tie in to what Christopher Nolan was doing around that time with THE DARK KNIGHT. Batman Ninja is a full on anime explosion from the get-go. 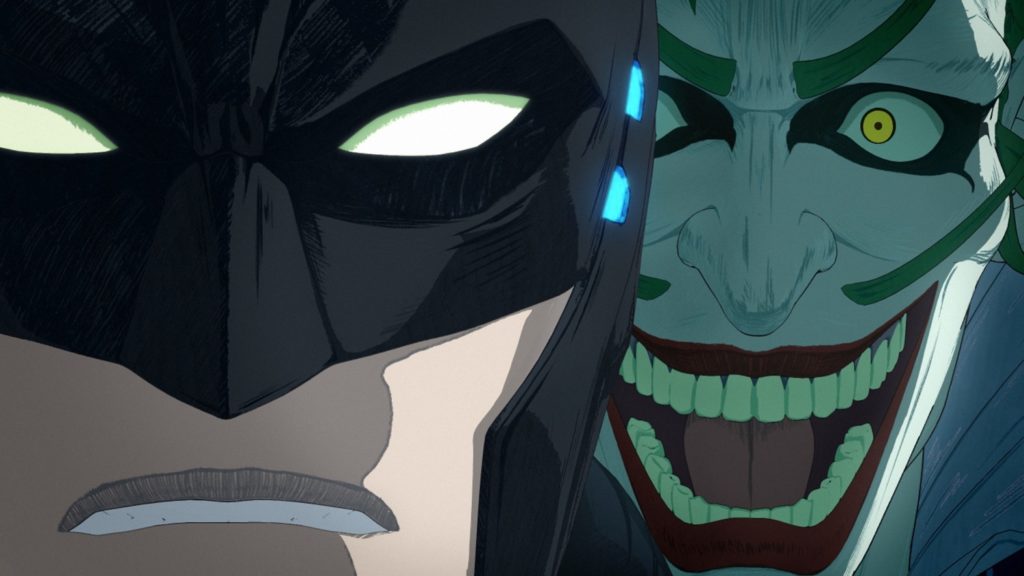 Grodd has gathered the Gotham underworld together for his latest and greatest scheme.  Before the Bat-Family can stop him, he time warps everyone to ancient Japan. From there on, The Joker and Harley run a muck and it is up to Batman and company to keep the time line, serve justice, and return home.  The film really nails Batman as they break him down and make him prove it is the man not the gadgets that make the Batman.  The filmmakers prove they understand each character perfectly throughout the film.  Re-imagine Damien Wayne in a completely uplifting way and making Harley and The Joker equal partners in their mischief. Motives, actions and the spirit of each character have been perfectly translated.

As the film progresses you can’t help but get mesmerized by the gorgeous artwork and action sequences. The fight scenes are extreme roller coaster rides. Seeing Batman move in a new unique way was visually energizing.  The final Batman/Joker fight is nothing short of incredible samurai fun. The detail that went into every character and background are stunning. I’ve seen the film already three times and there are tons of things you notice with every re-watch. 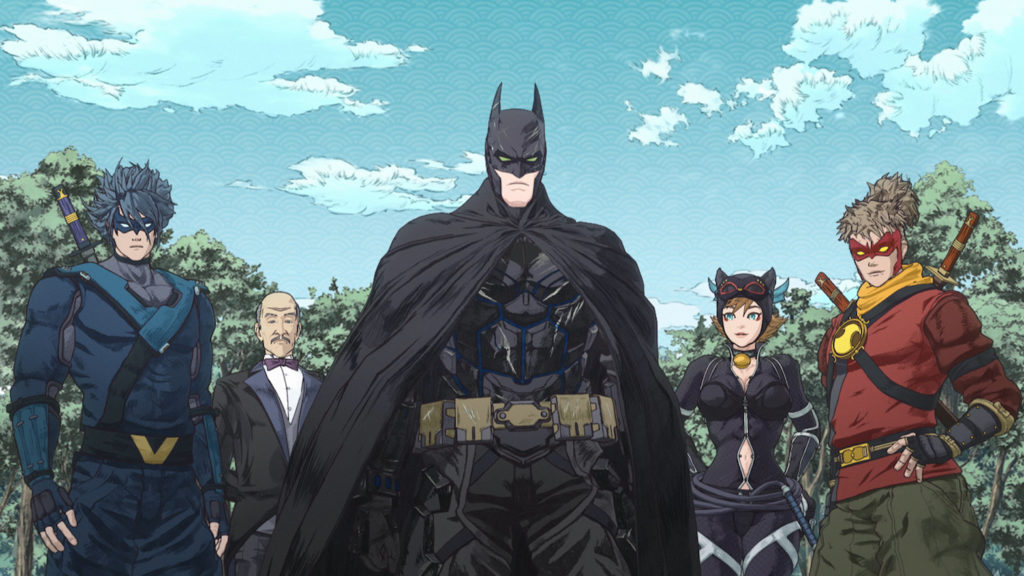 The character designs were a major concern going into the film from the clips and promo stills that were released; i.e. mostly Robin’s interesting haircut and the Joker’s mustache. After seeing this film from start to finish, I can’t think of one issue I had with how anyone looked.  The character designs of Nightwing, Bane, the Red Hood, the Joker, Penguin, Two-Face and Batman really stand out. Each character looked phenomenal. I can’t short change how gorgeous this film is.  For those of you who like myself are not anime fans but Batman fans, just embrace how unique this film is.

When you have the voice talent of Grey Griffin, Tara Strong, Roger Craig Smith and Tony Hale returning to these characters it’s not hard to buy them in this stunning medium. As soon as I heard Smith’s deep, gritty Marlboro Man voice I was drawn in. Hale’s laugh as the Joker is creepy and maniacal; he nails the tone and pitch. Griffin’s seductive, low and slow tone hypnotizes you as Catwoman.  Tara Strong is the definitive Harley and the perfect counterpart to Hale’s Joker. 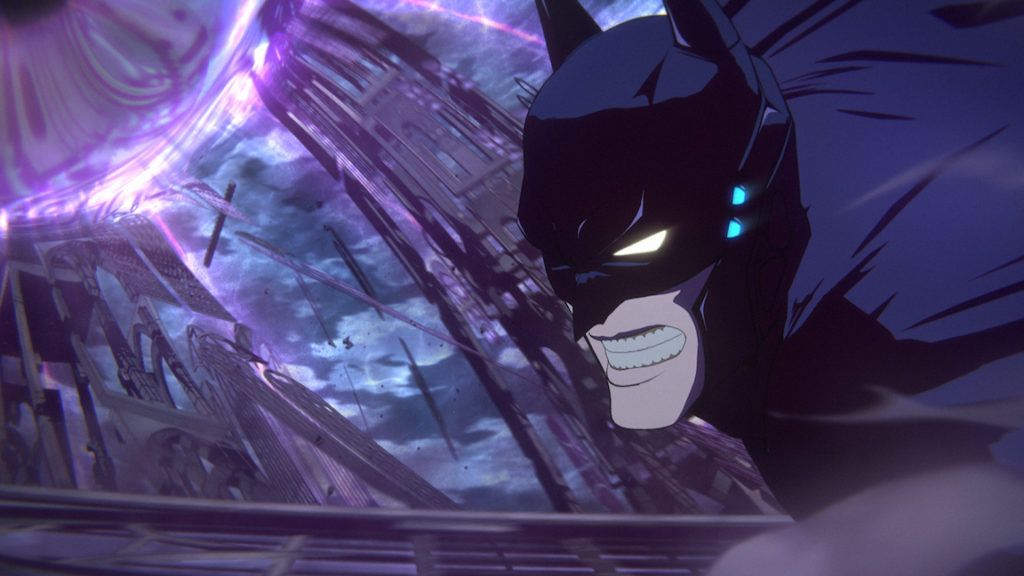 This is a true anime film, no doubt about that. At times, the film goes hardcore anime and the American audience might get taken back – so just keep an open mind. You have never seen a Batman film like this.  The familiar voices really provide the perfect transition and are the icing on the cake.  Anime fans are going to truly love Batman Ninja and I believe most Batman fans will as well.  I enjoyed the film so much I’ve even watched parts of the Japanese language version that is included in the digital and Blu-ray release.  Adding this to your DC Animated collection is a must. – Pete Verra Ben Affleck’s THE BATMAN: It’s a Moot Point (And Has Been)