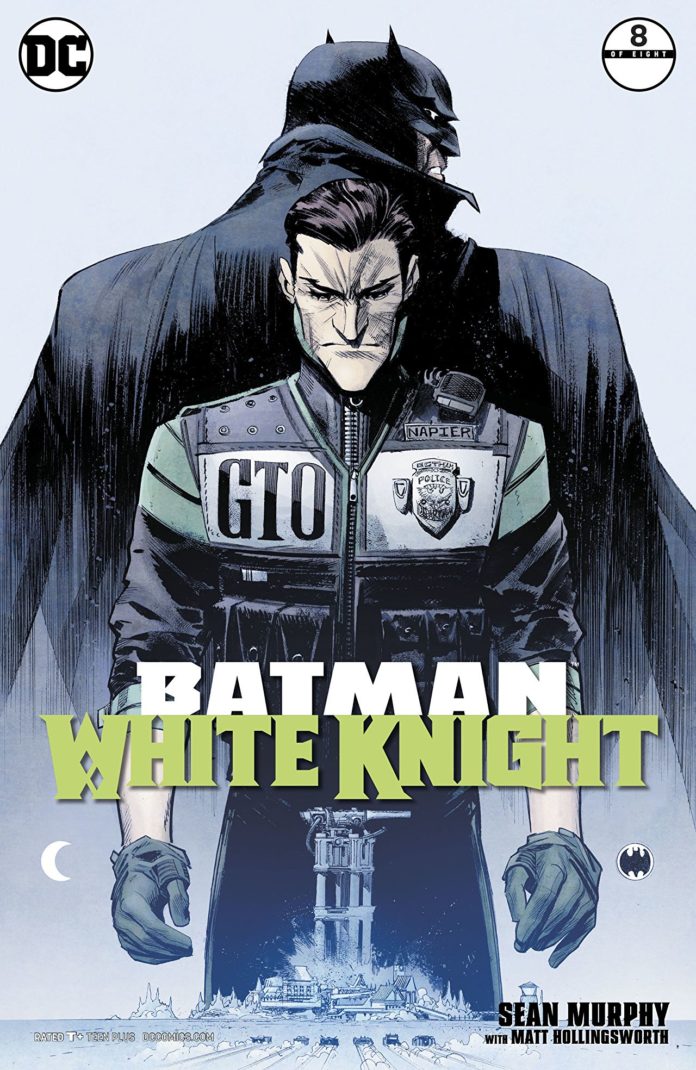 SYNOPSIS: In the extra-sized finale of Sean Murphy’s top-selling miniseries, Jack Napier’s suspicious seduction of Gotham City comes to its twisted conclusion! With the city on the verge of becoming an icy tomb for the GTO, Batgirl makes a crucial assist and Gordon is forced to reevaluate his judgment of Batman to secure the greater good. As the true Joker’s return becomes imminent, Harley seeks vengeance and reckons with the bleak future that looms for her loved ones.

After an amazing beginning, middle and end, where does Batman go from here?

Let’s back it up.

For anyone worried (for some ridiculous reason) that Murphy wasn’t going to stick the landing to his 8-issue story, fear not. The final chapter is amazing.

The GTO and Batman (with Joker riding shotgun) are gunning it toward Neo Joker, who has frozen Gotham City. Jack Napier is having trouble keeping the Clown Prince of Crime tucked away, but it works because that’s who Neo wants to come out and play. A fight ensues, characters have moments, and we’re left with an ending that can stand on its own, but also flow right into a sequel (which Murphy has been toying with for some time now).

I loved this issue. I’ve been repetitive on batman-on-film concerning this series, but there’s no other way to put it. Murphy created a great premise, with great characters, facing extreme situations that have repercussions. He wasn’t shying away from drama, and all of it seemed reasonable and true to the famous characters that inhabit Gotham City.

The Joker has always been the star of this series. The writer/artist even said he wanted Joker in the title, but DC pushed for Batman instead. This was about Napier’s struggle to keep the clown down, and prove that there was always more to him than an evil jester. It’s a premise that’s been touched on over the years, but never given the time to play out. It was a story I never knew I wanted, and it worked so well.

He says he’s Gotham’s White Knight….but as this issue shows, he may not be.

As always, the art is stellar. Every panel, setting, Batmobile and character are drawn to perfection. Nobody gets the short end of the stick here. The designs are distinct and original, yet recognizable and true to their history. This is a Murphyverse all right, and I hope we get to play in it again. I’ll sit it up there with Batman: The Animated Series and the Arkhamverse as putting a stamp on the Dark Knight’s near 80-year history. It’s that influential, affective and gorgeous.

I could write a novel on this entire series, and maybe there’ll be a retrospective on BOF later about the whole run. But I’d like to highlight my favorite moments from just this issue:

After a Batman story comes crashing in and dominates Gotham for 8-months, where does the Dark Knight go next? Sure, we have the bi-weekly Batman, and Detective Comics. Though fans are loving what those books deliver each week, they just haven’t made the impact that White Knight has. I’ve spent time thinking when was the last Batman series that was on this level, that delivered consistently from beginning to end? I honestly don’t know. I hope this has inspired writers and artists to up their game and deliver us more of this high-bar fiction, because what Sean Murphy did was unpredictable, remarkable and rewarding.

Batman: White Knight is the comic book series that we deserved, and needed right now. I hope he’s hard at work on a volume 2. – Ryan Lower