SYNOPSIS: The origin of Batman and his never-ending fight against crime in Gotham City is modern mythology, but what of the story in between? How did an angry, damaged young man grow into the most accomplished detective and crime-fighter the world has ever known? How did the Dark Knight…begin? Superstar writer Chip Zdarsky (Daredevil) and acclaimed artist Carmine Di Giandomenico (The Flash) will take Bruce Wayne on a fraught journey, making allies and enemies, on his training to become Batman in this definitive new series! 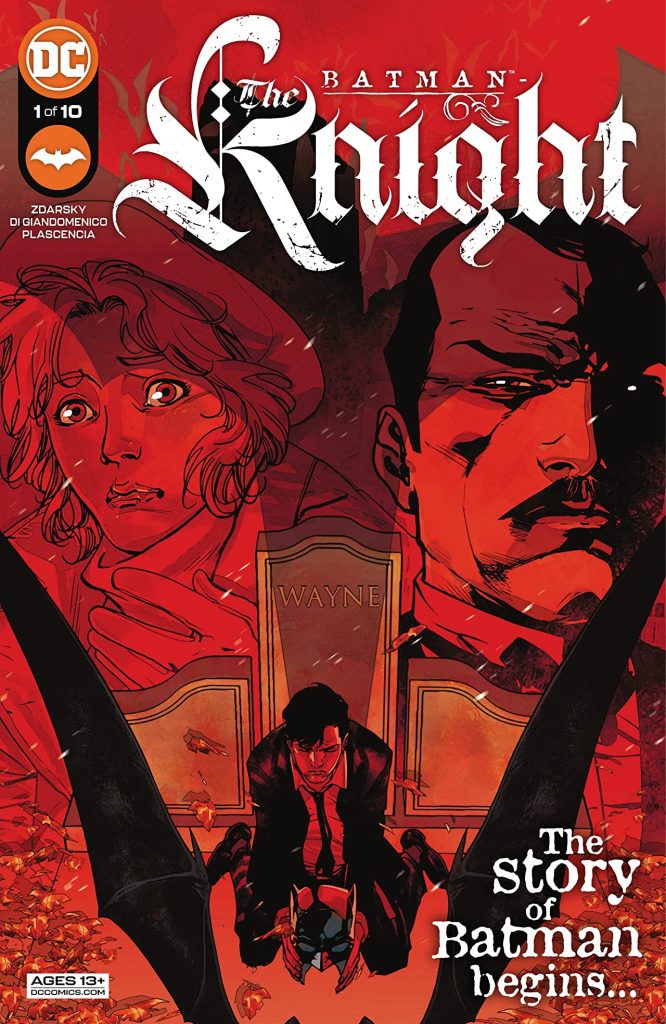 The Man Who Falls.

All are classics that have given us insight into the formative years of Bruce Wayne as he molded himself into The Dark Knight Detective. Now Chip Zdarsky, fresh off his hot streaks on Spider-Man: Life Story, Daredevil, and Batman: Urban Legends, is taking his bite at the apple, launching a new mini-series that has the potential to stand shoulder to shoulder with the aforementioned legends!

Zdarsky quickly opens on the night the Waynes were murdered. Alfred whisks away his young charge from the police station amidst a torrential downpour and already the art and coloring let you know this feels different. Di Giandomenico makes the opening page feel like storyboards from a movie, directing your eye to exactly where the focus needs to be. Ivan Plascencia does a magnificent job on colors, diffusing the glow of the streetlights as if it were actually raining “in camera. It adds to the cinematic feel of the opening.

The story transitions to an older Bruce Wayne, visiting his psychiatrist, Dr. Hugo Strange. The not-so-good doctor has been around almost as long as The Batman himself, debuting all the way back in Detective Comics #36, cover-dated February of1940. It’s fitting that Zdarsky includes him in this retelling of Bruce’s beginnings, especially given how the villain insinuates himself amongst Batman’s secrets in the future. Having him here strengthens those ties to the classic stories yet to come.

Zdarsky then seesaws the reader back and forth in the timeline, depicting Bruce’s early school days and contrasting them with what serves as the present-day for young Master Wayne. Bruce’s anger is prevalent and won’t be abated. While defending a fellow classmate, Bruce becomes a bully himself, studying in his library ways he can use to torment the perpetrator into leaving the academy altogether. He’s already starting to walk a fine line between hero and villain, long before the iconic moment that inspires him to become a bat.

Alfred is so strong in this. As always, it is clear that he loves Bruce as he would his own son, and seeing him become a spoiled brat causes no end of grief for the faithful butler. In fact, he gets downright angry when he picks up a now older Bruce once again at the police station in the pouring rain, creating a nice parallel to the issue’s opening. I could hear Michael Caine’s voice in my head as Alfred ashamedly mutters, “I’ve failed you.”

Thematically, Zdarsky has Bruce learn an important lesson, one highlighted in Batman #437, “We’ve got to think with our heads, not with our fists.” Alfred imparts the idea of this in the library scene when Bruce is still a boy. It’s a seed that has grown by the time Bruce is a young man and it becomes crucial in how he aids his longtime friend, Dana Dunlop.

If Dana reminds you of Rachel Dawes from The Dark Knight Trilogy, you’re not alone. Coming from a wealthy family, too, Bruce feels he can trust her and she is seemingly his only other confidant. Because of the longevity of their relationship, Dana sees things in Bruce that others don’t and can call him out on it, too. She’s a valuable character to the story, especially given whom she puts in Bruce’s path. Given that she’s a new character that we have yet to see in current Gotham, she may not be long for Batman’s world…

Di Giandomenico has a distinct, bold style that gets more perfect with every new work. I fell in love with his art on The Flash and was so excited when it was announced he was tackling the world of Batman next. His line is very striking and immediately identifiable. There’s a wonderful thing he does where a young Bruce’s shadow is cast upon Mr. Macintyre and Bruce’s hair is curled, almost hornlike, and off to the side, resembling something like prototypical bat ears beginning to rise. I thought maybe I was reading too much into the imagery, but Di Giandomenico repeats it during the conclusion, only this time the shadow is across Bruce’s face and the bat silhouette is more apparent. Obviously, knight imagery plays a factor as well, haunting Bruce’s imagination and hinting at the outfit to come.

Zdarsky skillfully tours us through Bruce’s inner pain and the dark self-destructive paths it takes him on. Joining underground fight clubs doesn’t come as a surprise, nor does his wealth and status in getting him out of trouble when need be. The dichotomy of the character is clearly present, focusing on a man who knows great privilege, but who also knows the harsh reality of life. Education becomes very important to Bruce throughout the issue, and we see him take it in whatever form he can get it. Bruce’s drive and cunning is clearly on display as well, demonstrated in how he handles Mitch and resolves Dana’s problem.

It’s an incredible time to be a Batman fan right now. We are about to have three different versions of The Dark Knight grace the Silver Screen and have an abundance of fantastic comics on the stands. I had assumed this story to be part of the Black Label line, but it doesn’t seem to be the case, indicating that this may be the definitive origin for the Dark Knight Detective in this post-Infinite Frontier world. Based on the strength of this first issue, I am all for it. This is a top-tier debut, with stunning art and coloring, enhanced by a riveting, character-driven story that pulls you in. This is not one to miss, Batfans! – Javier E. Trujillo