SYNOPSIS: When Huntress elected to go undercover in Arkham Tower, it was to investigate a place of healing that seemed too good to be true. But what happens when Helena Bertinelli really does need some healing? With Nightwing and Batwoman also on the inside, what began as an undercover mission has turned into a rescue operation as the mysteries of Dr. Wear’s Arkham Tower begin to unravel! Then, in “House of Gotham” part three, the young boy rescued by Batman has begun his course of treatment at Arkham, so why are the only people showing him kindness those whom the law asserts are criminals? It’s a cycle of violence the Dark Knight has no answer for as Gotham’s most vulnerable struggle to keep their heads above water! 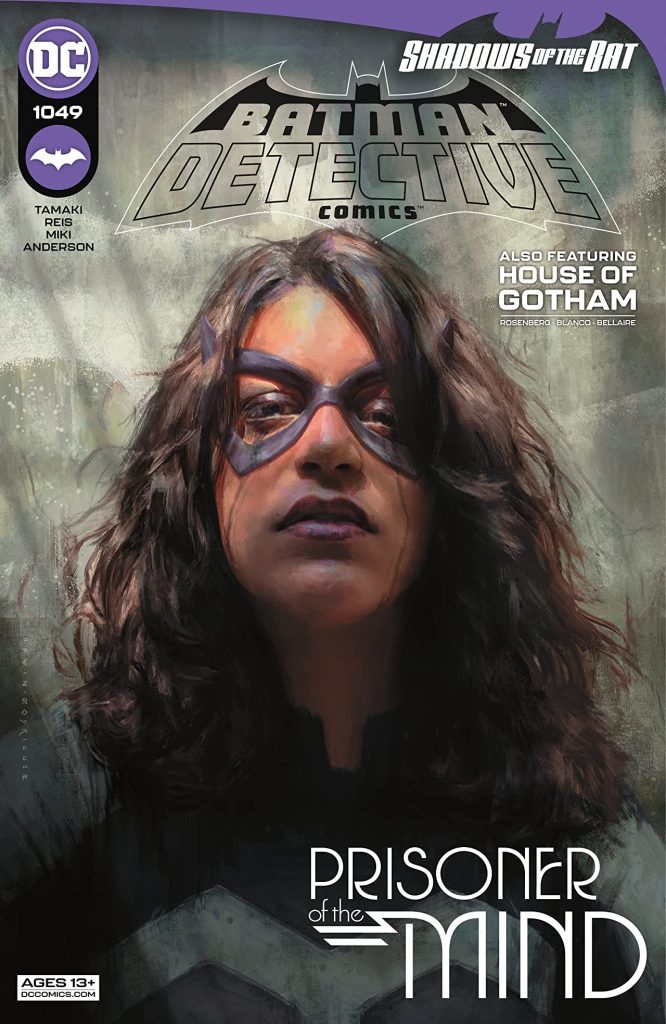 What makes this story special?  There is no Batman in Gotham City, but there seems to be less crime on the streets.  The new Arkham Tower is the latest attraction in Gotham for the crazies and the vigilantes.  What makes this new Arkham so interesting?  This issue sounds like another extraordinary evening in DC’s most dangerous city.  Let’s break it down!

What the hell is going on?  Like no, seriously, I am beyond confused.  I get that we are three issues in, but this is the most thrown-together thing I have read in a while, the way characters pop in and out for no reason.  What is happening?  There is no flow or structure to this issue.  I have no clue what happened to Tamaki, but this is not her best work.   What is the point, and why should I care?  The one thing holding my interest is Helena Bertinelli.  Tamaki, what are you doing with Huntress?  Why/how was she kidnapped?  Why wouldn’t she escape?  That is keeping me invested; that is what I am feeding off.  I can enjoy a search and rescue mission like any reader.  I need to know the stakes, who, why, and how.  We are not getting that in this book.    I’ve been reading Tamaki for a while now, since Wonder Woman.  Tamaki is all about details and trails of breadcrumbs.  We are not getting that here; we are just thrown into the middle of everything.   Weekly is brutal, and I get it.  The best part is, she can rebound next week, and I keep telling myself that.  For now.

Ivan Reis, on the other hand, you had yourself a day!  Reis crushed this issue, some of the best pencils you will get in a comic.  DC #1049 will be one of the better-drawn issues of the year.   Batwoman looking at the city gives you McFarlane vibes; Batwoman and Nightwing made me think of Adams.  Reis captures some excellent panels; at times, his Batgirl is a spectacular character representation.  Cassandra looks so powerful and stoic.  There was some action, unlike the last issue, and Ries does a great job juggling capes, gunfire, and explosions.  Unlike the previous issue, Ries was able to add some adrenaline to this story and three issues into this tale.  The lack of action pieces is one of my more significant complaints.  With too much talking and not enough action, this story needs to pick up the pace and up the ante.

Rosenberg’s House of Gotham part three continues to be one of the more bizarre tales out there.  Dr. Johnathan Crane has entered the festivities and has something extraordinary for Bruce Wayne.  Our red-headed star can’t help but find himself in the middle of all the action of Gotham city.   While it sucks to see this kid live this horrid Gotham City life, as the reader, I am having a blast with this insane tale.

The book is overpriced, Tamaki is not at the top of her game, and the backup is the best thing about DC #1049.  We will see what the next issue brings to the table, but this seems like a load too heavy for one writer.  I can’t follow what is going on because nothing is going on.  It feels like something is missing here.  Did I miss a chapter?  The artwork and the backup keep this week’s issue of Detective from falling a letter grade.  Shadow of the Bat is a shadow of a good comic book. – Peter Verra

BATMAN: THE DEFINITIVE HISTORY OF THE DARK KNIGHT Trailer Released