SYNOPSIS: The blue stripes are back! Nightwing gets an updated suit starting this issue! Meanwhile, after the distressing events of rescuing Haley from getting dognapped by bad guys, Nightwing discovers there are way more hits on Dick Grayson than he realized, thanks to going public about his fortune, and he needs to find a clever way to be Dick Grayson and Nightwing at the same time. Meanwhile, Heartless tries to buy power away from Blockbuster in order to take control of Blüdhaven, and both of these big bads have Nightwing in their crosshairs. 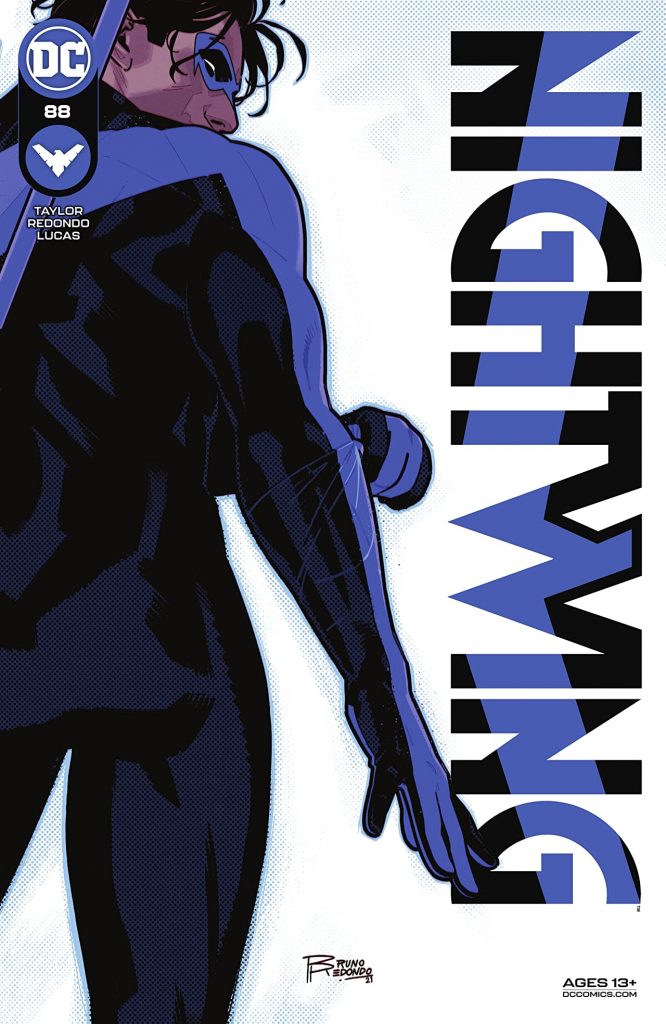 The game that began in NIGHTWING #87 is not over as Dick Grayson again finds himself in the crosshairs.

Aside from some basic superhero narration, NIGHTWING #88 hits the ground running. The opening pages give a wonderful contrast between Blockbuster’s skyscraper headquarters and Nightwing’s lowly apartment while the stakes are set up for us.

Unlike last time, when a captured puppy kicked the plot into gear, it’s a very public speech Grayson delivers on a new housing initiative. The powers-that-be don’t take kindly to what Grayson has been doing and he still has a bounty on his head.

NIGHTWING #88 is very much a team-up issue. There are loads of cameos that I won’t give away plus we get the usual Grayson and Barbara Gordon action that has been a staple of this run. It goes without saying that they make a fine Dynamic Duo. In addition, there’s a variant cover of them that is just … lovely.

That said, as someone who has wanted Grayson’s previous flames to get more respect, it would have been appropriate for Bea Bennett to get a shout-out in this issue. The character had a terrible send-off and her backstory advocating for Bludhaven homeless shelters should have at least earned her a background cameo during Grayson’s speech on housing.

What cameos we do get are handled well enough, though they do straddle that line between being cool and feeling a bit like an ex machina for one particular plotline.

After much hype, this issue also unveils Nightwing’s new suit in a scene reminiscent of Lucius Fox briefing Bruce Wayne on the lighter, faster, more agile suit in THE DARK KNIGHT (complete with discussion about vulnerability to knives).

Finally, I’m pleased to report that the credits still have the CHEERS/NEWHART font that debuted in the last issue. Long may they reign.

NIGHTWING #88 is a swell follow-up to the previous issue and teases the next one just right. – James Armstrong

Preview of BATMAN: THE DEFINITIVE HISTORY OF THE DARK KNIGHT!