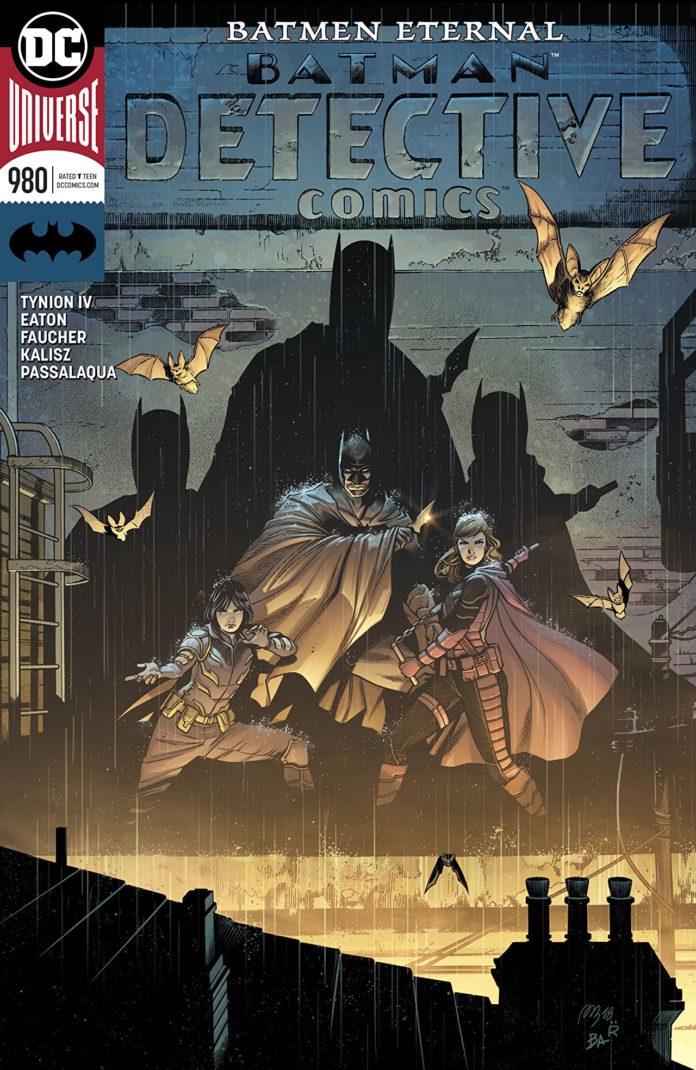 SYNOPSIS: “BATMEN ETERNAL” part five! The worst possible future for Gotham City has been locked into place, and there’s nothing Batman can do to stop it…until Stephanie Brown and Cassandra Cain catch a glimpse of something they never would have thought possible!

Detective Comics under Tynion has been a story driven by character. With two issues left you know Tynion is pulling out all the stops and in this issue he does this, almost, to his disadvantage. The story at times feels a bit crowed and rushed with almost too much going on. With that said Tynion does deliver a fantastic conclusion with Spoiler front and center.

The book opens wonderfully with Montoya and Bullock, a quick two panels of banter.  These little moments are what Detective has been built on with Tynion at the helm.   He starts to lose me when the OMACs show up at GCPD.   Tynion built up the Red Robin/Batwoman drama for so long.  To see it play out as Red Robin turned into a Batman OMAC with Ulysses controlling him seems like a bit of a let down.

Spoiler has been re-imagined in this run wonderfully and this issue will not disappoint.  This run has reintroduced us to a Spoiler who no longer wants to live in the shadow of the Batman and is ready to give up playing capes and tights.  Ulysses knows Spoilers DCU past and tires to use it against her, only to fuel her motivation.  It is really incredible to see it played out before you.  You will have to give those panels a re-read with out a doubt.  The 90’s Stephanie Brown fans will literally go head over heels.

Scot Eaton is the artist that provides the interiors of the issue.   Anytime I see Bullock in a book he brings a smile to my face, the sloppier the better.  Ketchup stains, half un-tucked shirt, loose tie typical Bullock.  Eaton draws some impressive Batman poses and the action panels do not disappoint.  My only gripe is there is one panel where Batwoman’s cowl looks really funky. The highlights of the book were the flash back cameos of Stephanie Brown and Cassandra Cain from previous DCU’s. Warms my heart to see them on the page and a magnificent way to end the book on a high note.

While this isn’t the best story in run it does have its moments.  Seeing Spoiler rebuilt through out this run has been tremendous.  She is strong, bold and determined unlike any Spoiler we have seen before.  Turning what was supposed to be her weakness in to her strength and motivation is genius, bravo Mr. Tynion.  We still have one more to go BOF’ers! May 23rd is the conclusion to the Tynion run I’m pumped for it! – Pete Verra