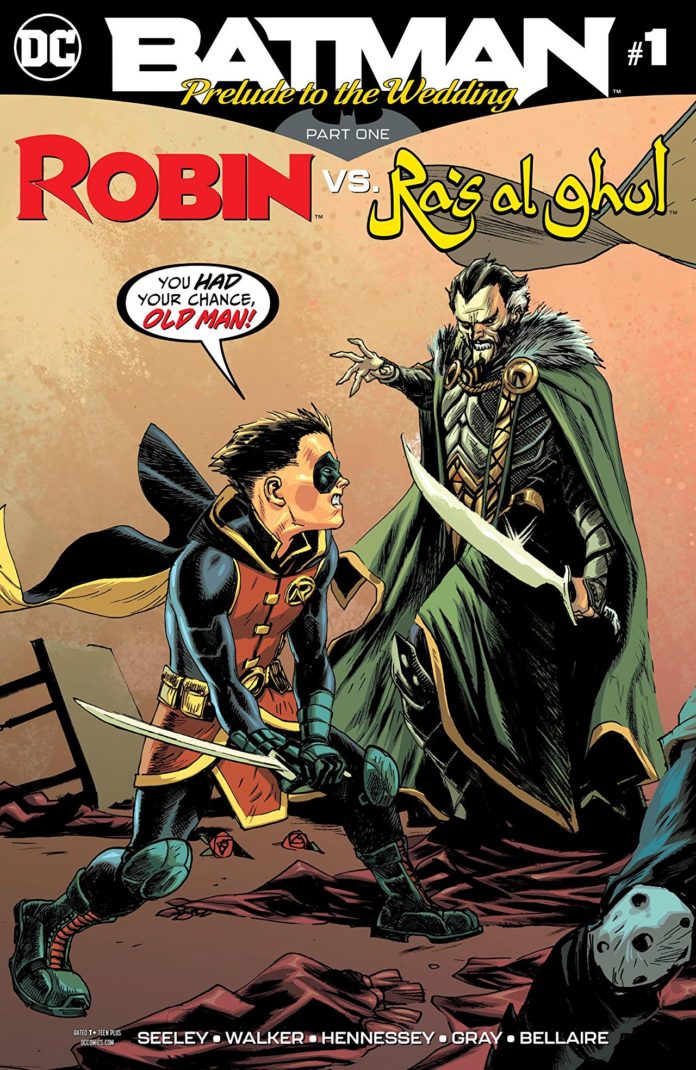 SYNOPSIS: Ra’s al Ghul returns to have a heart-to-heart with his grandson, Damian. Once upon a time, Ra’s thought Bruce Wayne would be the heir apparent to his criminal empire, but now that Batman has turned his back on Talia for good, Ra’s wants to know if Damian Wayne will honor his mother by stepping into the family business at last.

I have been a huge fan of the story Tom King has been setting up in the solo Batman title. I know for some it can be quite poetic or repetitive in the King’s style, but I can see the endgame.  So as we head to the wedding in  50th issue of Batman, DC is capitalizing on this event with a series of one shots to set up the Batman Family of characters and their different side stories.

I like that he is headed toward a new status quo with Batman. There have only been a few huge shake ups that stick in Batman’s history that I think hold any weight. There was Dick leaving and becoming Nightwing, the death of Jason Todd, Barbara getting shot and Damian Wayne.

I love Damian Wayne, there are people that dislike the character. To some he is  an annoying punk. To others he has stolen the moniker of Robin from Tim Drake. To me, he is a bold story choice in Bruce Wayne’s usually unchanging story. Having Batman have an biological sons adds a fun wrinkle in the Dark Knights history. Especially considering his mothers lineage. Which brings us to ROBIN VS. RA’S AL GHUL.

The story starts with a good moment between Damian and Selina Kyle, as we are in the final moments before the wedding. Damian taking pride in standing beside his father while at the same time letting Selina know he will not 100% honor her position in the family. In this moment Time Seeley and artists Brad Walker do a great job recapping Damian’s origin in just a few panels.

There is a new character that I have never seen before. There name is Aion. I absolutely loved the idea about them. How they come about and all of their backstory is on you to pick up. I will not spoil that info about them, but it was the more interesting engagement in this issue. I really liked them as a foil for Robin and the design fell right inline with the Bat-family of characters. I hope to see more of them, ifthat is even possible.

So to get to the title bout of this book. Robin Vs. Ra’s Al Ghul…

So the confrontation between Robin and Al Ghul is pretty sloppy. I didn’t completely buy the interactions between grandson and grandfather. I would have went with a more mental battle of wits than the overtly physical clash presented here. A sword fight is always welcome with R’as, but it should never be immediate and it should have more to do with honor and ritual than sudden attack. I do like the seeds of doubt R’as placed with in Damien, I hope they grow into something or else this whole one shot is for not.

The end was a nice payoff to the opening, with Damian and Selina forming a great alliance inside the Wayne home. I do wonder if Seeley was aware of BATMAN #37 because DDamian asks Selina how his grandfather is aware of the upcoming wedding. I am pretty sure Talia is aware, which makes R’as aware…am I missing something? – Justin Kowalski