FEBRUARY: The Ventriloquist and Scarface make “their” debut in DETECTIVE COMICS #583. 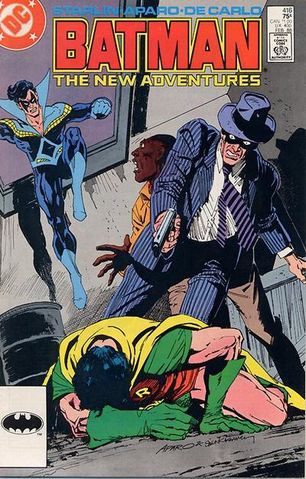 MARCH: The graphic novel THE KILLING JOKE – written by Alan Moore with art by Brian Bolland – is released providing a new possible take (depending how The Joker remembers it) on the origin of The Joker. The Joker also shoots and paralyzes Barbara Gordon. TKJ is considered by many to be one of the best Joker stories and graphic novels of all time.

THE KILLING JOKE influenced how The Joker was portrayed in Christopher Nolan’s live-action film, THE DARK KNIGHT (2008). The Joker’s multiple and conflicting stories of how his face was scarred resulting in a Glasgow smile (“Wanna know how I got these scars?”), was a direct nod to The Joker saying his true origin was “multiple choice” in TKJ.

THE KILLING JOKE has been adapted as an R-rated animated film and was released in July of 2016.

MARCH: The story arc “Ten Nights of the Beast” begins in BATMAN #417 and the KGBeast makes his debut.

SPRING: Jack Nicholson and Michael Keaton are cast as The Joker and Batman, respectively, to star in director Tim Burton’s live-action film, BATMAN. Warner Bros. would receive over 50,000 letters from angry fans protesting the casting of “Mr. Mom” – Michael Keaton – as Batman/Bruce Wayne.

AUGUST: Deacon Blackfire debuts in the 4-part story, “The Cult.” Collected, BATMAN: THE CULT would later be released as a graphic novel.

JETT REMEMBERS
By 1988, my Batman fandom was starting to ramp back up…significantly.

I contribute this to one thing and one thing only (besides the fact that I’ve always loved Batman): The upcoming live-action Batman film.

My most vivid memory of Batman in 1988 was the hoopla over the casting of Michael Keaton as Batman. How did I find out? Well, I was back at the mall bookstore I’ve been telling y’all about, reading books, comics, and magazines. Speaking of magazines, I’m not sure if it was in COMICS SCENE or STARLOG, but there was a small blurb in one of them reporting that Jack Nicholson would play The Joker and Michael Keaton would portray Batman in a upcoming live-action Batman film.

”Michael Keaton is playing Batman?! WHAT THE F**K?!”

My very first thought was that this new live-action Batman movie was going to be a remake of the 60s Adam West TV series. Why else would you cast Mr. Mom and Bill Blazejowski (NIGHT SHIFT might just be my favorite MK movie!) – a comedian nonetheless – to play Batman?! While I didn’t write a letter of protest to Warner Bros. and thousands of fans did, I was puzzled and outraged. I’d eventually come around, but that’s a story for the 1989 installment of this timeline series.

As far as the other “big thing” in the world of Batman in 1988, I did read THE KILLING JOKE when it came out (again, off the rack at my local mall bookstore), but did not buy it until the following year after BATMAN ’89 was released. – Bill “Jett” Ramey