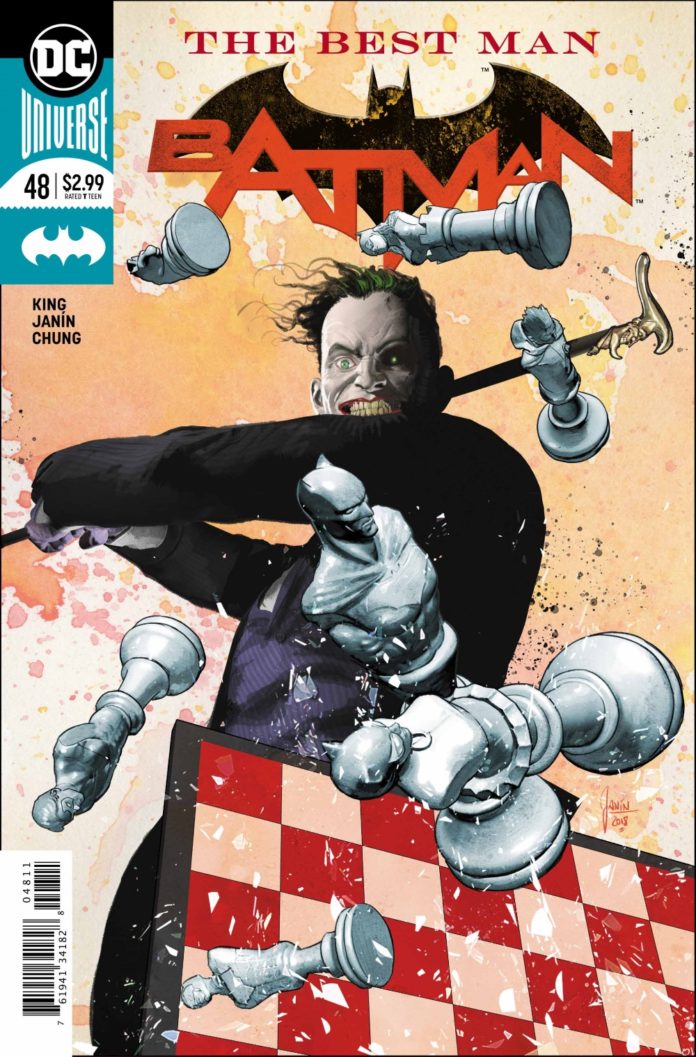 SYNOPSIS: “THE BEST MAN” part one! Batman and Catwoman decide it might be better to elope rather than go through some big, stodgy wedding ceremony, but no sooner do they put their marriage on the fast track than The Joker appears! And when The Joker kidnaps the Caped Crusader, will he give his old foe a piece of his mind or bash in his brains?

BATMAN #48 delivers a Joker at his most dangerous and despicable.

The opening pages by writer Tom King and artist Mikel Janin skip the jugular and aim straight for the soul, evoking recent headlines about school and church shootings that make the horror here feel all too real — as if King’s Joker prologue in DC NATION #0 didn’t scare us enough.

Deep inside one of Gotham City’s most beautiful cathedrals, The Joker cruelly kicks a young couple’s wedding into a sickening spiral of slaughter. He knows his disgusting deed will bring The Batman, and it’s one of the nastiest and grandest plans The Clown Prince of Crime has ever perpetrated. Because, you see, he’s well aware of Batman’s impending nuptials… and he’s jealous that he wasn’t invited. Unleashing such carnage at a wedding, when Batman clearly has his own vows on his mind, is a stroke of vile genius, because maybe, just maybe, the very venue will throw Batman off his game just enough.

The escalation is unrelenting, culminating in Batman joining The Joker in a sacrament that makes their shared laugh in THE KILLING JOKE seem like child’s play. And through it all — including an inspired choice of hostage — The Joker keeps talking, and talking, and talking, as King entrusts letterer Clayton Cowles with dialogue that’s dastardly in tone and diabolical in tenor. King understands everything that makes this monster awful, and the uneasiness builds with neither mercy nor predictability.

Meanwhile, Selina waits outside, just as Bruce asked her to. Because it’s The Joker. Because he knows how much worse it would be than if any of his other rogues got their hands on her. What is The Joker’s grand plan? Will it succeed? And how long can Selina — who’s no big fan of being told what to do by any man, let alone the one she loves and knows is in danger — wait around on a rooftop when she’s just as afraid for Bruce’s life as he is for hers?

Throughout THE WAR OF JOKES AND RIDDLES, Janin worked miracles with the facial expressions of a petulant, pouting Joker who never smiled. In these pages, the Joker’s eyes and mouth get a wicked workout, stretching from rage to glee and everything in between. The scale of this tale is effectively small, with June Chung ably imbuing the church’s interior with a palette that’s equally intimate and imposing. She continues to be an MVP of King’s stupendous run.

Looking ahead, how can this wedding possibly happen? Does Bat say, “I’m sorry, Cat, but it’s too dangerous for you if I love you, so I have to go away?” Does Cat say, “I’m sorry, Bat, but I’m afraid our marriage will only get you killed, so leaving you is the only way I can truly love you?” Such sentiments are among the oldest cliches on the block; at this point, the biggest twist ending would be that they actually do tie the knot. It would certainly be more interesting than the typical partings we’ve all seen a million times in stories such as these.

Before those questions can be answered or even asked in BATMAN #50, we’ve got to get through #49, which #48 sets up to be quite the firecracker. I still can’t rid my brain of Booster Gold’s unintentionally ominous words to Bruce last issue…

“You were happy, and the world wasn’t.”

Christopher Nolan found a way to give these star-crossed kids a happily ever after. But as much as King clearly loves their pairing, I’m still not certain how or if he’ll actually follow through. The suspense is incredible as BATMAN just keeps getting better. — John Bierly