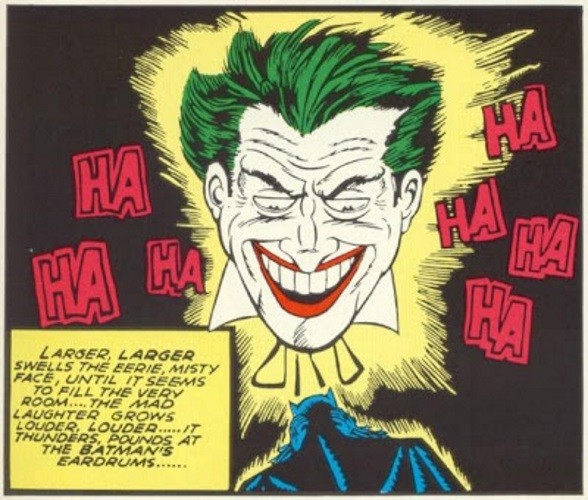 One of the touchstones of The Joker’s interpretation in comics is the first dozen stories featuring the Joker that follow his introduction as a cold blooded killer and his transformation into a clever prankster that would bedevil Batman over the years without falling prey to the morality police. There are a dozen stories that make up this initial introduction, so 8 parts to go after this.

The Return: The Joker is plucked out of the ocean by a passing yacht who apparently don’t realize who they picked up.

The Plot: The Joker is running a circus that plays in the private homes of the rich, and later the gang returns to rob the place after scouting it out.

Other Mayhem: Batman and Robin tangle with acrobatic and strong burglars, and later the same acrobats and strong man who are working for the Joker, Robin is grabbed and Joker attempts to throw him down a trapdoor with a deep shaft, Joker traps Batman in a room with poison gas, and Joker and Batman fight.

The Outthink: Batman uses an explosive from his utility belt to escape from Joker’s deathtrap

The Comeuppance: Batman throws the Joker down the trapdoor pit that the Joker intended to throw Robin down.

Continuing The Joker’s transition from merely a death dealer/gem stealer this is a story that highlights both sides of The Joker, clown and ghoul. The Joker is still a work in progress here as Finger, Kane, and Robinson try to make him work as a continuing foe, but there are still some memorable bits.

The Joker vs. The Batman in “The Case of the Joker’s Crime Circus,”
BATMAN #4 (Winter, 1940)
There are two parts to the story, once the setup of the Joker escaping death is accomplished. The first concerns the goings on of the Crime Circus. And that’s typical early Golden Age Batman and Robin stuff. A mystery: who is robbing these houses, an early encounter of Batman and Robin versus acrobats and a strong man with a momentary setback, a solution (you don’t need to be Sherlock Holmes to figure out that acrobatic burglars might be related to the private circus that played at the houses earlier), and a sprung trap by Batman and Robin are efficiently told. There’s nothing wrong with that portion of the story, but there’s very little that rises above the generic either. And anonymous, non-flashy crimes simply aren’t the Joker’s style.

This may be the earliest example of Batman and Robin versus circus performers and it will be repeated over the years. Acrobats are a natural challenge to Batman and Robin instead of more ordinary criminals and allows for some fun in the fight scenes. And, of course, Batman versus a a monster of a man is something you see to this day. Ubu and Bane are examples of that. The Red Triangle Strong Man of BATMAN RETURNS is also obviously descended from this root.

The Joker doesn’t really have much to do in this portion of the story, although it does suggest he can choose to get along with other criminals, provided he’s in charge. There’s one memorable moment where The Joker removes his circus clown makeup to reveal the unchangeable clown underneath that’s still memorable. The Joker even remarks along the lines that this is his true face. This is the first definitive time that The Joker really himself to be a clown.

The Joker sheds his disguise in “The Case of the Joker’s Crime Circus,”
BATMAN #4 (Winter, 1940)
The second portion of the story concerns Batman and Robin trailing The Joker to his hideout, a “haunted house”, and dodging various attacks and traps. Robed figures, sliding panels for the Joker to strike from, and ghostly projections all add to the effect. This is iconic material and it certainly appears to have been an influence on the climax of Englehart’s and Rogers’s DARK DETECTIVE mini-series. The undead imagery has been a part of the Joker in the earliest stories and it perhaps reaches its zenith here. Unfortunately, it will soon vanish from Joker stories in favor of the clown.

The final fight where Batman saves Robin from being thrown down a trapdoor to unknown depths is brief, but it does show some evolution on the characterization of The Joker. It’s clear that without outside circumstances intervening that he may be a handful, but the Batman is the more accomplished fighter. Made especially clear by how Batman dispatches The Joker down the trapdoor that he intended to throw Robin down. The visual imagery of the Joker’s defeat bears some resemblance to the climax of the bell tower fight between Batman and the Joker’s henchmen in Tim Burton’s BATMAN and can be considered a potential influence.

In many ways this story feels like two stories shoved together. A burglary story with circus criminals, but lacking a memorable throw down, and a Joker climax lacking a plot to lead into it. It really wouldn’t surprise me if that was exactly the case. In any event, despite some good ideas, the story is lacking the extra level of complication that sets Golden Age Joker stories apart. – Robert Reineke

NEXT: “The Riddle of the Missing Card”