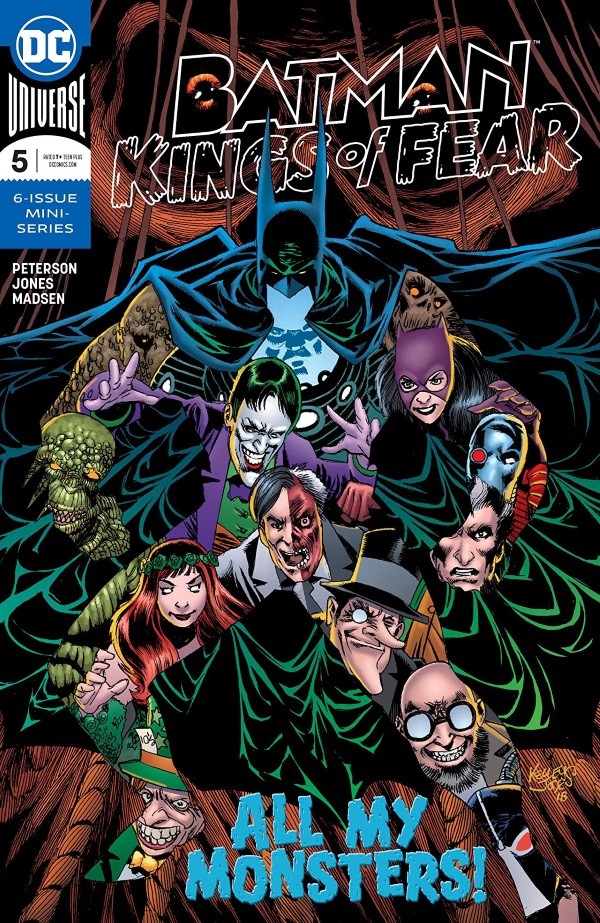 SYNOPSIS: Scarecrow’s endgame is in sight! He has created a world without Batman for the Caped Crusader to be tortured by. It’s a world controlled by crime, where fear always wins!

Batman: Kings of Fear #5 takes us into the deepest depths of the Dark Knight’s psyche, as Scarecrow takes Batman on a tour through Gotham; though it’s not the dark and gritty Gotham that Batman prowls the streets of each night.

No, this is a Gotham that is and free of any colorful rogues or caped crime fighters. And consequently, it is pristine, clean, has a low crime rate, and the polar opposite of the Gotham we know.

For the first few panels I thought Scarecrow had transported the Dark Knight to Metropolis, but as it turns out, Dr. Crane has decided to torture Batman by showing him what Gotham would have become had Batman never existed. By showing Batman that his rogues are fueled by their engagement with Batman, the evil doctor plans to break Batman’s body and mind with fear toxin and to crush his soul by proving that Batman has caused much more strife than he has ever prevented.

The moment Batman acknowledges this is the moment he seems to truly break; that is until he pulls one final trump card that we will see play out in next month’s final issue.

My initial fear (heh heh heh) when beginning this series was that the plot would either be too simple or would be a retread of themes previously done justice in other Batman stories or mediums. After all, Scott Peterson and Kelley Jones haven’t been in the Batcave since the 1990s.

While the last two issues had alleviated my concerns, I was a bit uneasy with the rehashing of the “your villains exist because of you” plot thread. We know this has been done countless times (it seems like themes from the BTAS episode “Trial” is invoked a lot in this series, no?) in both simple one-off stories, and as an ongoing theme that Batman is constantly wrestling with.

While I still feel that Peterson put a fresh take on this concept, I am hopeful that he wraps it up with a nice twist or resolution that we haven’t yet seen.

I absolutely loved Peterson’s writing when it came to what the villains did in this alternate timeline when Batman never donned the cowl. Their occupations were clever, creative, and funny (I’m looking at you Oswald).

And what more can I say about Kelley Jones’ art? I will be spending all the dollars on the biggest hardcover edition of this when it is released, as the psychedelic imagery is big, bold, and beautiful. These issues are easily worth the art alone.

Overall, I love this series but feel like this issue was a slight re-tread. However, it is darkest before the dawn, and I believe the dawn will come in the final issue. Go pick this series up if you haven’t! – Mance Fine