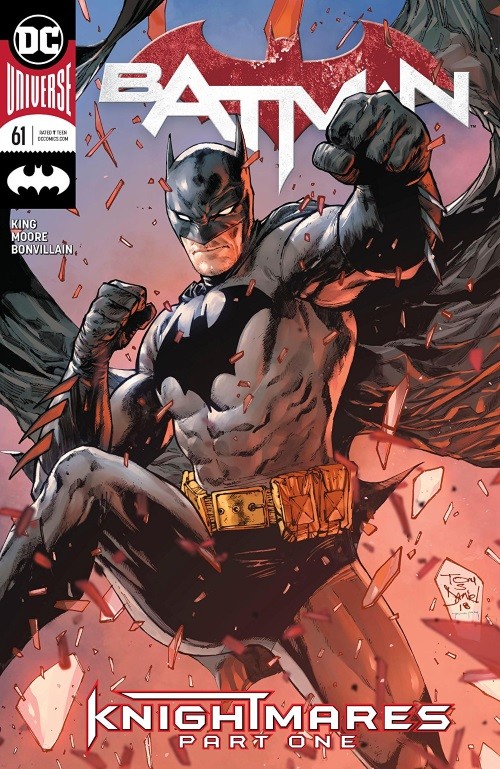 SYNOPSIS: Thomas and Martha Wayne have been murdered and The Batman is on the case.

It’s fitting that Tony Daniel’s cover to BATMAN #61 is somewhat generic (albeit dynamic), because what image could possibly begin to describe the madness that awaits inside? (Francesco Mattina’s stunning variant is similarly mum.) This issue is indicative of what we’ve been getting from writer Tom King over the course of the last several issues: unpleasant and unrelenting, but original and exciting in all the right ways.

Back in issue #58, The Penguin ratted out (or quacked out?) Bane to Batman, who raided Arkham Asylum in issue #59 to rip Santa Prisca’s Patron Saint of Back-Breaking from the secret throne from which he’s been ruining Bruce Wayne’s life.

This did not go well.

Issue #60 ended with Cobblepot missing from his protective custody in the Batcave as Batman tended to an injured Alfred, who’d been knocked to the ground by Bane’s chief lieutenant, who looks an awfully lot like Flashpoint Thomas Wayne Batman, whose very presence here means we can’t trust time or space, which means we can’t even trust that this shadowy sentinel truly is, in fact, Flashpoint Thomas Wayne Batman, even though he probably is, or possibly isn’t.

Add this latest cowled conundrum to the temporal and spatial shenanigans that happened when Booster Gold got Bruce Wayne an ill-advised wedding present in issues #45-47, and how can we possibly know what to expect in these pages?

Tom King knows this, and he uses issue #61 to play this city like a harp from hell.

Page 1! The Wayne Murders! Young Bruce Wayne stands over his fallen parents in an alley as a gun-toting assailant runs away. And in the ensuing panels, Jim Gordon seeks help in finding the Wayne’s’ killer from, um, a Batman, who looks like our Batman, who visits young Bruce to urge the boy to tap into his inner detective to help solve the case.

None of it makes much sense, but it’s one of the most handsomely crafted issues yet of a book that’s looked nothing short of spectacular since King’s run began. Travis Moore (from various FABLES projects) pencils and inks some of the most expressive faces I’ve ever seen in a comic, and his Batman is an instant classic: coiled for action even when he isn’t moving, ever calculating every angle around him. A sequence involving a commuter train is as big on momentum as courtroom scenes and emotional panels are emotional and moving. This is fabulous stuff.

And what really makes it all come together are the colors by Tamra Bonvillain, who’s currently doing superstar work on Dark Horse’s adaptation of William Gibson’s unproduced ALIEN 3 script. Her utility belt is the best one I’ve ever seen, with blue pouches trimmed in the same yellow as the buckle. Her palette impressively makes the rounds, from drab browns and cool greens in police interrogation rooms and prison cells to shades of every blue imaginable on and around Batman as he’s on the prowl, to angry reds and oranges that accompany sudden, savage violence. And those are just the highlights. The synergy between Moore’s pencils and inks and Bonvillain’s hues is out of this world.

This is the first issue of a six-part dive into mystery and mayhem called “Knightmares,” and it lives up to its title. King takes a big gamble by casually passing off anachronistic times and places, and he almost tips his hand a time or two when a particular character speaks in a tone that’s just not quite right. When he finally pays it off at the end, you’re so shaken and disturbed that you’ll immediately need to read it again to make sense of it all, and it’s that second read that will really make you appreciate how twisted this story really is.

If there’s anything downside to this one, it’s that it won’t make as much sense if you haven’t been reading King’s run. But for those who’ve been around for a while, the ending will satisfy even as it shakes you to your core. If the remaining five issues of “Knightmares” are even half as nasty as its opening salvo, we’re in for some dark days indeed. As always, I trust Tom King to light the way. – John Bierly