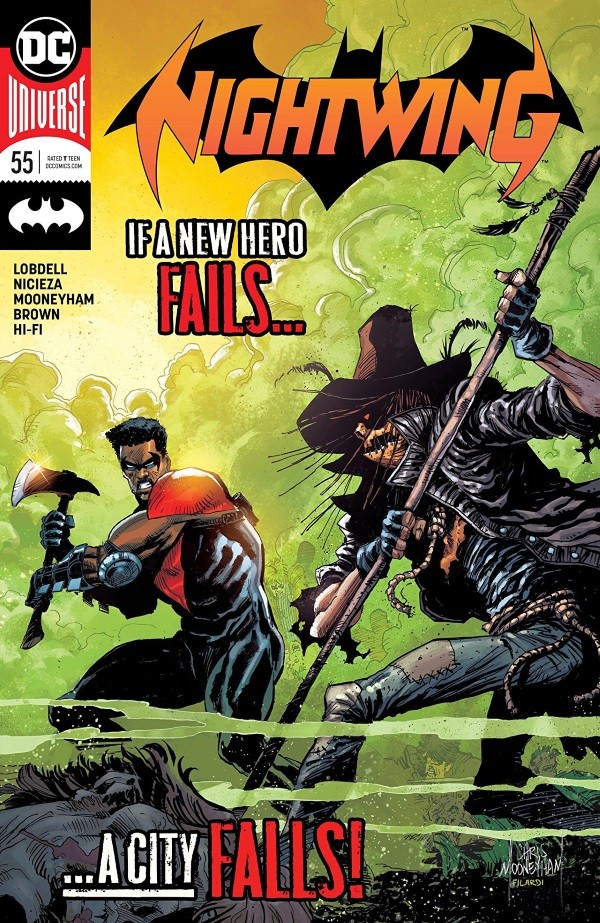 SYNOPSIS: The repercussions of the cataclysmic events of BATMAN #55 continue as a scarred Dick Grayson has given up his vigilante persona in favor a normal existence. A new job, new friends, new life—all are compromised when a safe house full of old Nightwing gear falls into the wrong hands. Confronted with a past he’s worked so desperately to escape, will Dick Grayson answer the challenge by becoming Nightwing…or something else? The newest chapter in the evolution of Dick Grayson reaches its next level!

NIGHTWING #55 is one of the best in the “Knight Terrors” storyline. It’s been said over and over again that in comics you write each issue as if it’s a kid’s first comic. Well NIGHTWING #55 reads like the kind of comic I could have grabbed off the shelf at a Mini Mart gas station back in the day and right away have a feel for our hero’s recent adventures.

If in the future you wanted to sample the “Knight Terrors” storyline to see if you’d like it this issue would make for a fine jumping-in point. Or heck, jump in right now and support your local comic book store!

We catch-up with Ric Grayson at the Prodigal Bar playfully bantering with his new love interest/bartender Bea about his outstanding bar tab. Their evening is interrupted when three fear-gassed brawlers appear and Ric has to jump into action.

Earlier, the new Nightwing crew had a better get-together as they grabbed coffee and gave their leader, Detective Alphonse “Sap” Sapienza, a friendly jabbing for all the media attention he received at the end of the last issue.

One of them also poked fun at his nickname “Sap,” which is long overdue.

Elsewhere, recurring character Detective Elise Svoboda drops by the home of Ric’s psychiatrist Dr. Gruidae after being unable to find any record of him working at Arkham Asylum. Gruidae quickly drops the facade and reveals himself as Dr. Jonathan Crane/the Scarecrow.

In previous issues, Scarecrow has done a frightening deed and then we’ve cut away. This time, not so much. Scarecrow finally wants to get his hands dirty and it’s about time.

This issue is once again drawn by Garry Brown but this time around shares the work with Chris Mooneyham instead of Will Conrad from NIGHTWING #54. I have to say it’s a better pairing.

In NIGHTWING #54 the two styles were worlds apart. One opted for a clear, proportionate look while the other was more free-form and, for lack of a better term, comic-booky.

This artist combo in NIGHTWING #55 clicks much better and the art is consistently comic-booky. It looks like Frank Miller on a good day. There are even a few panels when the fear-gassed attackers seem to have smoke coming out of their mouths and I swear I saw smoke drawn that way in THE DARK KNIGHT RETURNS.

All in all, this series has been picking up the pace lately and with the art more consistent I couldn’t recommend Nightwing more. – James Armstrong

Could THE BATMAN Be More “Grounded” Than THE DARK KNIGHT TRILOGY?